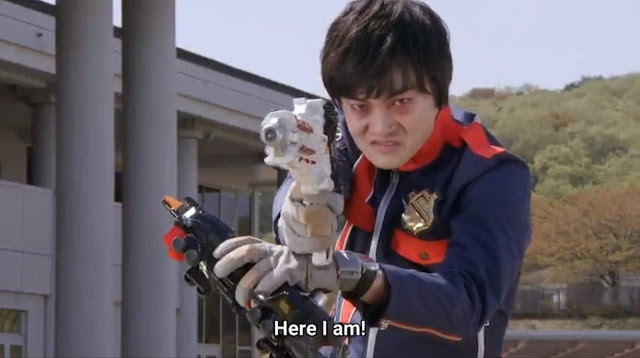 Episode 15 here and full of anticipation. Last episode ended on a cliff hanger and this episodes preview showed a not fully recovered Patranger team struggling. This season has burned me before on two parters. Will this episode continue that trend? Click "read more" and we will see.

The episode begins showing the Patrangers in the hospital. Keiichiro is still unconscious from poison and the other two are being treated for injures. Meanwhile, at the Lupinrangers Bistro, commander Hilltop pays a surprise visit to the restaurant. From him they learn of the recent hospitalization and decide to go pay a visit to snoop for information. Cut to intro.

Wasting no time in this episode. Hopefully that means something big is planned.

Hilltop visits Tsukasa and Sakuya in the hospital, seems they will be released in a week. Keiichiro however, is not doing so well. Defeating Togeno (one of the Ganglers from last episode who poisoned him) should cure him but until then he is gradually getting worse. Tsukasa is especially upset and mad at him for being so reckless.

Speaking of Togeno, the Gangler boss has basically banished him for wasting his time in the previous episode. He begs for a second chance. Destra takes advantage of him and says he will give him the chance in exchange for information on the Crush Brothers' collection pieces. (That being the Drill and Crane.) What he is offering exactly isn't revealed yet, but Destra does take out one of his collection pieces. 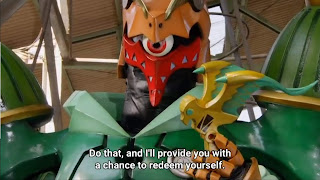 Kairi and Umika show up at the hospital to visit and gather information. Through a series of chats and wondering, Umika bumps into Sakuya who seems to be sneaking out of the hospital without telling Tsukasa and Kairi is shocked when he sees Keiichiro. Tsukasa explains what happened to Kairi and he just cannot understand why he would take his job so far. A classic case of the selfish not understanding the selfless.

Sakuya had actually rushed off to the kindergarten to let them know their field trip can still happen. While there he runs into Souta who has grown a little bit of respect for the Global police. Touching scenes but you can't help but feel something uneasy. That is good suspense. 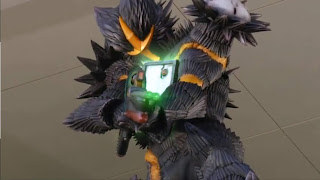 Togeno is back and packing heat. He screams for the boss to notice him and starts firing his spikes poisoning random people on the street. What a crybaby. Tooma is in the crowd but takes cover, henshins into Lupinblue and begins to fire back. He dodges his spikes with moves that can only be described as Matrix. Turns out Togeno's firing speed has increased ten fold thanks to the new collection piece he had acquired. Word of the Gangler quickly spreads to the others who all get ready to join in. I guess active shooter news never gets old.

Kairi and Umika arrive on the scene first and quickly jump into action after learning the situation. Both are eager to finish this quick. Perhaps a little concerned over Keiichiro? Everything seems to be going well at first. They are dodging his shots alright and Kairi summons his shield to block them and manages to take him down. He does for the collection piece but is hit by a small spike from inside the safe.

He gets the collection piece but is also poisoned. Two red rangers. Not bad Togeno. Kairi is down and the other two are in trouble when Tsukasa and Sakuya arrive just in time and begin their own attack. I am positive they did not intend to save the Lupinrangers. 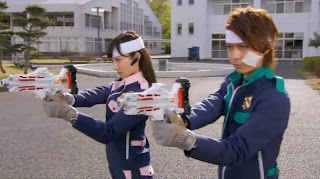 Back at the hospital, Keiichiro overhears some of the staff talking about the Gangler attack and, despite looking like death, forces himself out of bed to join in. Guy has got willpower. Almost, Rock Lee willpower. Back at the fight, Umika is watching the Patrangers battle in amazement. However, their injures slow them down and Togeno gets the upper hand. Naturally, it is at this point the Keiichiro shows up holding his changer and Goodstriker. Where did he comes from? He gives his inspirational speech, henshins, and the battle music begins. Having little stamina, they decide to fuse and go for a one shot kill. Will a little bit of help from Lupinyellow, they succeed and everyone's poison is done. Keiichiro does a victory dance afterwards. What a dork.

Now, time for the typical giant battle. Obviously, since they already had Goodstriker, Patkaiser is chosen this time around. They both fire at each other, take a few hits, and, it doesn't take a genius to guess that they are going to combine with their new VS vehicles. The crane and drill forms Patkaiser Strong. Clever. 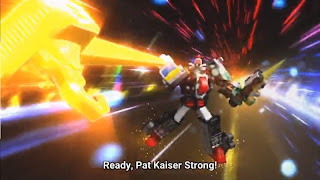 Their new moves consist mainly of stretch arm punches, drilling, and using the crane like a fishing rod and swinging the Gangler around. Okay, that last one was kind of creative. They swing Togeno into the drill and finish him off earning them another Mission Complete. Brutal way to kill though. Even Kairi is impressed with them.

The episode ends back at the kindergarten where the Patrangers are reporting the all clear for the field trip. Souta rushes out in excitement to see them wearing a new costume that resembles a police officer. Even though, it was Sakuya who inspired him, Keiichiro is still happy, saying it is for the best. 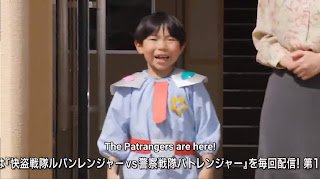 Finally! A follow up to a cliff hanger that did not disappoint. This episode had amazing pacing, never once did it feel like things were dragging. Another Patrangers focused episode, except this time both teams got some development. The Lupinrangers opinion of the Global Police seems to be changing and they're developing some respect for their rival team. I really don't have anything bad to say about this episode. A simple story of fighting through tough times and second guessing the way one things. Simple maybe, but very effective in this case. 5/5

Normally, 2 good episodes are followed by a stinker. What does the preview show for next time? A body swap!? Oh....lord

Happy Halloween! Unrelated. No shame.
Posted by Cendoo at 12:00 PM