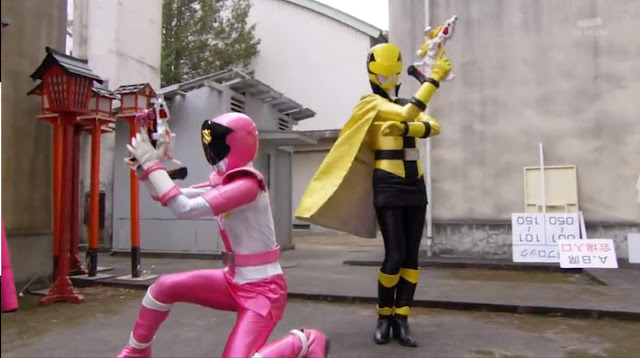 Time for the 13th episode of Lupin vs Pat. Hard to really say what to expect this time around. Last episodes preview showed that it will involve a member of teach team being handcuffed to their counterpart. Yeah, being bound to someone you don't like is kind of a tired tale. However, let's click "read more" and give it the benefit of the doubt.

This episode begins in the Patrangers HQ feeling like a cheesy sitcom. They are going about their morning routine except for Tsukasa who has the day off. She seemed excited leading the others to suspect her of having a date. Seriously? That is how we are starting this off? A quick cut to her shows her looking nice and excited to see someone. She just said "you" so most likely not a date. And, cut to intro. 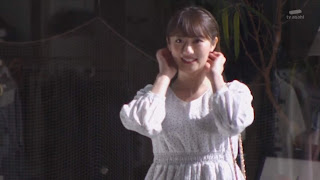 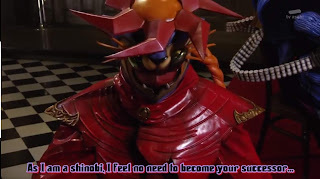 We then find ourselves at the villains HQ where we get to see this episodes monster of the week. A female ninja named Naiyo, except this Gangler has a bit more personality. She comes in bickering with Goche and tells Dogranio that "when" she conquer the human world she would like to take Goche's place as a right hand instead. He agrees, saying that if she succeeds she can decide his successor. I feel like Dogranio is only seeing amusement. Goche is completely unphased by this as well.

Back at the Lupinrangers Bistro, they aren't opening because Umika has also decided to take the day off. Where is she? The same place Tsukasa went; an amusement part to join a stamp rally in hopes of winning a plushy. No shame! That bread bear thing is adorable. While in two lines next to each other, and, of course, see each other in horror. 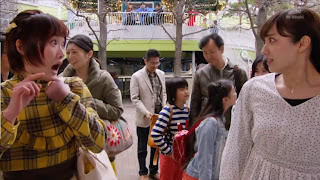 They are both super embarrassed to be seen by each other and exchange some awkward smiles. To make matters worse, they are sold out of single rally tickets with only pairs left. So, the two are forced to go to the amusement park together and collect stamps.

Given the cliche nature of this plot you'd think I'd knock it. But, it is actually done well enough to be hilarious.

Umika is terrified to be there with PatRan Sangou while Tsukasa is treating it like a trial to get her beloved plushy. Awkward forced smiles are a go as they begin the journey. What follows are a series of events where the two of them collect stamps on a card through various amusement park rides. Hijinks ensue naturally. It ends with a haunted house. Unlike Umika, Tsukasa is quite afraid of these but tries hard to hide it by doing the old act of offering the other person support when they need it. She eventually cracks though and freaks out. Umika is surprised but the events remind her of a very similar experience she had with Shiho. (Reminder, Shiho is Umika's lost best friend whom she is trying to save as a Lupinranger.) I appreciate the character building but that was a little too coincidental. Also, turns out that Shiho was the one who loved the plushie and Umika was trying to get it in her honor. Aww

It is at this point that Naiyo appearance at the park and places a barrier around it. Coincidences being the name of the game. With that, she believes that no Lupin or Pat rangers will enter and interfere with her plans. Honestly, not a bad plan given the track record of monsters of the week. 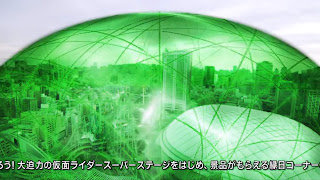 The two girls find a couple victims of the Ganglers attack so Tsukasa sets off to face them asking Umika to stay behind. Obviously, she is not going to stay out of it in fear of a collection piece being destroyed, and luckily there is a costume in the haunted house storage that can be used as a makeshift phantom thief outfit. That's is your third coincidence strike.

I suppose having that episode where the three were accused of being the Phantom Thieves and proving innocent is their excuse for these obvious discusses to work. Tsukasa henshins and begins fighting while the 4 boys are called on both ends for backup.

LupinYellow joins in the fight in attempts to steal the lupin collection piece and a 3-way girls only fight breaks out. They go the extra mile to make it look like a silly cat-fight, dragged by the legs, slaps are thrown, the works. Eventually, the two rangers start only focusing on each other to which Naiyo takes advantage of their distraction and goes for the kill chains them together for some reason. 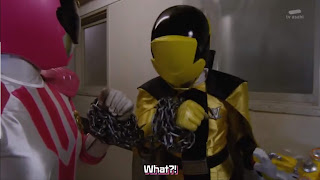 Naiyo attacks the confused twins and knocks them out of their morphs. But, before being finished off, they manage to escape with some last minute teamwork but not before taking some damage. The two of them exchange words on unfriendly terms. Tsukasa tells that she always thinks about the ones they couldn't save from the Gangler and never wants more victims. The term victims is bound to hit Umika. Outside, Keiichiro and Sakuya show up but are stuck outside the barrier. However, they manage to break it with Kairi and Tooma's secret help and the 4 race inside. A new potential finishing move is shown. If these two teams worked together they'd probably be one of the stronger Sentai's. I like that secret angle. 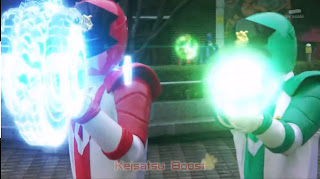 Back to the fight it goes. The girls have formed a truce after learning that Naiyo's scythe is the only thing that could break their chain. The fight her un-morphed at first and show off some impressive synchronized martial arts. Naiyo eventually strikes with her scythe and they manage to get the chain sliced off with no hand lose. A cut close no less. They exchange some unfriendly (secretly friendly) words, henshin up, and have a much more successful battle against the Gangler.

It isn't completely one sided, but the two manage to catch Naiyo off guard and get her collection piece with a fake-out human shield strategy. Tooma and Kairi show up and this point, drag Umika out of the way and deliver the finishing blow. Total kill steal!

Basic formula from here. Goche appears to to revive Naiyo and turn her giant and other than a couple comments between the two it is nothing new. Goodstriker appears and goes to the Patrangers but they smack him away to focus on the now unconscious Tsukasa so it is LupinKaiser this time. I believe this is the first time that the small and giant forms of a Gangler were stopped by the same team. The giant battle is completely one sided with Lupin Kaiser Knight finishing off Naiyo bidding her an Eternal Adieu.

The episode ends back at the Bistro where the Patrangers were waiting for Umika. However, Tsukasa is upset that she wasn't able to get the plushy. Good news, Umika got two of them. Bad news, it was the bread bear Fuwapan which wasn't the one she wanted. Rather, she was actually after a potato pig knight called Jagaton. A sweet moment turned sour. Weird, yet kinda funny note to end on. 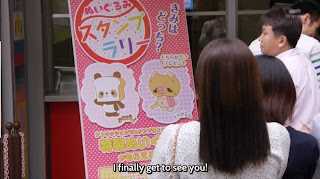 This episode was really amusing. The bits at the amusement park and the ending were funny and it was nice to see some real martial arts for a change. It is just too bad that the story was lacking. The tale of an unlikely alliance was done many times before. Also, despite how the preview made it look, only the girls were tied together and it barely lasted, only 3 scenes I think. Naiyo was a bit of a let down as well. She was introduced with some promise; a ninja with a separate goal in mind. However, none of her fights showed any ninja like attributes to it. Despite these draw backs though, it was still a fun episode to watch. Also, it is a breath of fresh air to see a girl power episode for a change when the female rangers are usually pretty underplayed even if their victory was stolen. 3/5 I don't regret watching it but probably won't think about it much beyond Tsukasa's funny moments.
Posted by Cendoo at 12:00 PM