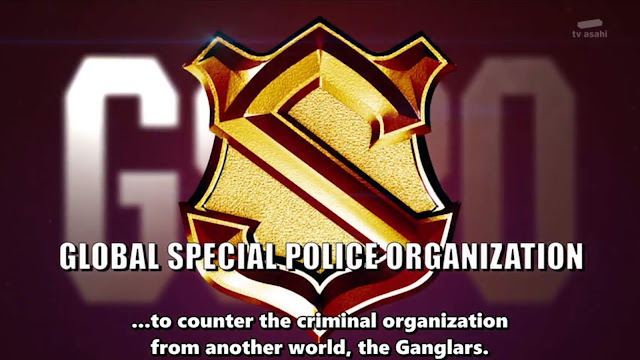 Hey all, it is Cendoo aka Red Diamond back again with episode 11 of this duel Sentai season. Last episode was pretty disappointing and the preview for this episode did not look any better. Will this episode blow up in my face as well? Click "read more" and let's find out.

The episode begins with a narrator role calling the 3 Patrangers. I suppose since they haven't been the focus of an episode in awhile it was assumed we forgot about them. Then they start fighting men in black suits and masks. No, this isn't a throw back to the 70s sentai (at least I don't think it is) but it turns out this was all the filming of a movie. Boy, the out of world feeling is real. A show filming a movie about the show except with in world lore. This scene gets a big "CUT CUT" after Sakuya messes up his fight and falls over. 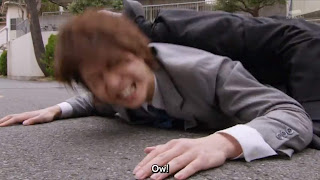 This doesn't make sense. I get he is supposed to be the goofball of the group but isn't kinda off that a highly trained police officer chosen to be a Patranger would have trouble with a simple fight stunt that he has already proven to be more than capable of doing? Or, perhaps that is the joke.

Turns out this movie was an order from Hilltop. Why? Simple, the Phantom Thieves are more popular than them in the media and he is worried they will "lose face" if nothing is done. I already don't care about this episode. Keiichiro and Tsukasa are hating it, but Sakuya is having a blast. 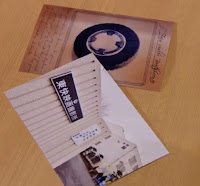 Cutting to the Lupinrangers, they have their next target. This one has been causing a lot of injuries at Tokai movie studio. Want to take a wild guess and say it will be the same studio the Patrangrs are filming at? Speaking of filming, the Patrangers are still trying to get their movie made. In a dramatic scene, Sakuya gets another "cut" from the director who tells him he is missing sex appeal. This is a kids show right?

As soon as this is said to him, Sakuya glows green and changes transforms into a women. Then cut to intro. What? 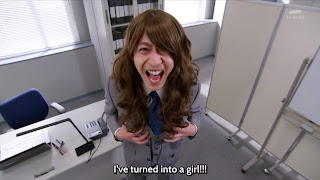 The Lupinrangers arrive at the studio and notice the police already there. Called it. Assuming they must know of a Gangler inside they rush in. Well, given what just happened, they do figure out a Gangler is involved and try to put filming on hold to investigate. The director says no because this event is interesting. Another bet, maybe this unknown Gangler IS the director? Regardless of protests, Sakuya him/her self agrees that filming should continue and has embraced this new form.

The other two Patrangers are just as uncomfortable as the audience and the filming continues. Sakuya's devotion to this new identity is terrifying to Keiichiro and Sakuya as they almost scream on set. Of course, the Luprangers happen to catch this filming in the act and can't control their laughter. This, get's them busted. 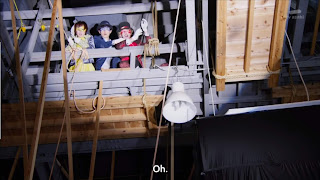 Things quickly escalate from there as both teams morph up and rush outside for a shoot out. They even went as far as to design a female version of PatNigo. 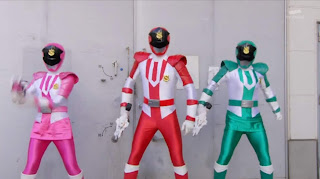 After a couple of awkward sexual jokes, the Patrangers conclude that if the Lupinrangers are there than there must be a Gangler. Just as she says that, one walks right up and introduces himself. Yup, that is how we are introduced to the monster of the week. 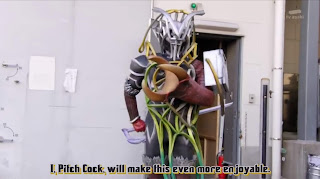 Hitchcock Pitch Cock. This hilarious Gangler has two abilities, switching genders and making people slip. I guess I owe Sakuya an apology for earlier. The other two Patrangers get their genders swapped as well before the Gangler leaves. None of the 6 rangers like this. Neither do I. It is also worth noting that the director walked out of the building at the very moment the Gangler walked into it.

Some time passes, everyone thinks filming must be put on hold, all except Sakuya who finally reveals why he is so determined to get that movie. He/she wants the world to see how cool Tsukasa and Keiichiro are because as a trainee he looked up to them. Touching scene actually, first good one of the episode. Even if all 3 actors had to cross dress in it.

The good news is, Keiichiro and Tsukasa are finally suspicious of the director and plan to expose him. Which kinda makes me think he is innocent now to avoid a predictable plot twist. Bad news is, new script. 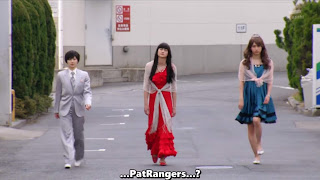 While filming the new fight scene, the actors and most of the staff reveal themselves to be Pordermen and the staged fight becomes a real one. The trans-Patrangers morph up and begin a fodder battle. The director and two cameramen did not reveal as Pordermen so who knows. This fight is silly, they all do stereotypical gender based attacks.

The director is loving this which causes Keiichiro, Tsukasa, and the Lupinrangers (who just jumped in out of no where) to point their guns at him convinced he is the Gangler. 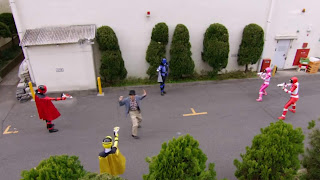 He is confused but the rangers are convinced until Sakuya jumps in and points the cameraman to be the true Gangler. How did he/she figure it out? "Women's intuition". I'm not buying that!. 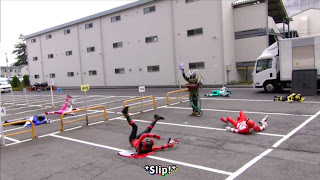 The fight is actually pretty good. It is the typical 3 way struggle with the Patrangers struggling to fight in their new bodies. After everyone gets slipped again, it is the Lupinrangers that figure out how to beat his tactics. They swing in air so the slip technique cannot hit them and steal his treasure item. In response, Pitch Cock tries his genderswap beam on the Lupinrangers but they avoid and the Patrangers take the hit being changed back to normal. Wait, don't they need the collection to use these powers?

Time for the giant battle. It is Lupinkaiser again, they go into knight mode immediately and are easily winning. Pitch Cock tries his gender swap beam on the Scissors Vehicle turning it to a Hammer one instead. What?

They finish him off by smacking him around with the Hammer a bunch and after his defeat it turns back into Scissors. Bidding another Eternal Adieu. That is the stupidest way I have ever seen a new mech introduced.

The episode ends with the Patrangers watching the completed movie. All except Tsukasa seem to like it and Sakuya makes another pun about picking up girls.

Why is this a thing? Who could have green-lit such a stupid script? This episode tries to be a more comedy based one but it depends too much on awkward moments to do it. While some people will get a chuckle out of that, there was nothing creative or original about this concept of a forced gender swap. The writing is lazy as well. The Lupinrangers get 1 unmorphed scene and the two scenes involving the main villains is just them talking about the movie. They have no problem writing the Patrangers as the supporters for an episode, why can't the same work in reverse?

While there were a couple good moments, (like literally 2) they are not enough to save this episode. The only thing of note that happened was the introduction of a "new" vehicle Hammer but it doesn't look like it can be used again based on its terrible way of being introduced. Was that the point? A way of advertising its toy without having to use it again? I don't know, and I don't care to know. 1/5. Not good by any means, but not unwatchable so I won't give it a 0.
Posted by Cendoo at 12:00 PM