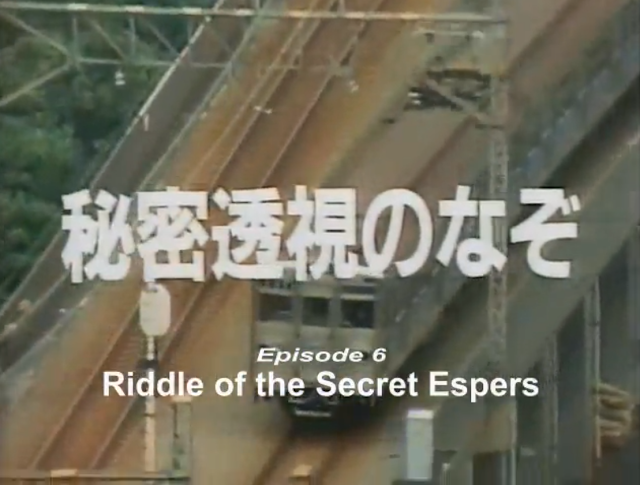 Sorry! No Kamen Rider Zi-O review today!  Didn't watch it in time, so here's my summary and review of Kamen Rider Black Episode Six instead... Not like that's a bad thing anyway.  (Click on "Read More" to read the full article).

Episode Six: Riddle of the Secret Espers wastes no time in getting into the story as it opens up with a big giant eagle man kidnapping artist from around the country.  What kind of sick plan does Golgum have for them? Painting up saucy fan fics? Training them to be painter themed Kamen Riders? Getting a psychic to use their powers to train the painters to paint secret government documents? No, none of these, for you see that their plan is... Wait, it was the third thing that I had mentioned and yes I wish that I was making this up.  It's another super cheesy illogical plan for world domination! But it's too early in the show to judge how dumb the plot is right now, so continuing on...

We cut to a news report where a girl named Tomoko who was also a witness to one of the kidnappings is talking about what happened and Kotaro just happened to be watching it on TV.  Kotaro wastes no time and goes to meet Tomoko, he knows that she'll be in danger after seeing her reporting on what she saw...  Then we cut to the lair of the demons, where Eagle Man doesn't look too happy and that's it.  Tomoko walks out of the TV station only to get kidnapped by the Golgum (who didn't see that one coming) and Kotaro turns up as soon as the Golgum rides off, thus starting a chase scene.  This chase scene doesn't last long and out of nowhere comes Eagle Man with something for you!.. I mean, Kotaro.  Eagle Man tackles Kotaro, grabs him, and drops him from several feet in the air (ouch).


Will Kotaro meet his fate? Nah! Kotaro transforms into Kamen Rider and begins to battle Eagle Man in the art of one on one combat.  They have a decent fight but Eagle Man escapes as it is far too early in the program to kill off the monster of the week.  The Golgum manage to get Tomoko to the psychic lab (*Kaiser Sensei saying with an intense echo in his voice), where they are making psychics via science, laserbeams, and drugs.  Tomoko also recognizes one of the kidnapped as her boyfriend but is soon taken away.  After wards we see the psychics use their powers to see into buildings and project their secret super computer plans on to a screen thus making the Golgum's plan more logical and scary than I thought that it was going to be... Although, still silly, very, very silly.  Their plan is also working and they are getting all of the information that they need.

This is where the big plot twist happens, the Golgum reveal to the audience that they aren't really after secret plans but they are trying to make their two best psychics jealous of each others skill, so they can get them to compete to the point where they'll cause total destruction...  I don't give the Golgum enough credit, this plan sounds like a plan that's quite effective to their goal of world destruction.  As for Tomoko, they erase her mind of the events and brainwash her into thinking that she must commit suicide at some point...  Damn, these Golgum are ruthless.


It's the next day and Kotaro is riding his bike and doing some investigation, while Tomoko is at her house and is not acting like her normal self.  Tomoko's family notice that something is wrong with her but as soon as they talk to her, Tomoko runs off and tries to drown herself in the river, while her family is chasing after her in distress and trying to stop her from committing suicide by drinking too much river.  Lucky for them, our hero, Kotaro turns up and jumps into the river and saves her... Although, barely as Motoko is now in hospital.  Don't worry, she is fine and Kotaro has already figured out that she is under hypnosis...  Then again, once you've seen Lord Goat Man spread his purple horn juice to control people, you've got a pretty good idea that someone has been put under control *THROWBACK*.

Kotaro then drives off to meet Tomoko's boyfriend whom is now a overpaid rich psychic business man and tries to talk to him but isn't getting though to him.  Yup, Tomoko's darling love has gone full yuppie!  Those sick Golgum b*****ds have gone too far with this one!  Lucky for Kotaro, he finds out that Tomoko has been talking in her sleep about the psychic lab and off goes Kotaro and he finds the place with no problem and goes into Solid Snake mode.  Meanwhile, the two psychics have finally gone to war with each other by hacking each others computer equipment... WITH THEIR MINDS-INDS-INDS-INDS-INDS!


Kotaro breaks into the office where the evil doctor that started the whole thing is and begs them to stop the experiment.  Kotaro fails to convince the doctor and gets into a fight with all of the doctors scientists and out of nowhere comes Eagle Man again.  Eagle Man spears Kotaro out of the building and the two of them get into a fight in the courtyard.  Kotaro changes into Kamen Rider but Eagle Man still manages to ruff him up a little and escapes but Kamen Rider chases him down by using his Battle Hopper (his bike).

Kamen Rider catches up and jumps on Eagle Man's back and starts riding him like Hercules riding Pegasus, it's quite a sight to behold.  Kamen Rider then rips off one of Eagle Man's wings, knocks him to the ground and defeats him with one kick and thus Eagle Man has been defeated.  The hypnotic effects on all of the psychics has faded away and so have their powers, now they are back to being friendly painters again and not crazy psycho psychic yuppie anymore.  Everyone is happy and so should you as that is the end of the sixth episode of Kamen Rider Black.

The writing in this one wasn't terrible but could've been way better and felt like that they tried to cram an hours worth of story into a half-hour show and it really showed.  The pacing is off and a lot of the plot setup doesn't go anywhere, making this a wasted episode. Dealing with two rival psychics, a mad doctor, a stressed out girlfriend, the evil Golgum, and Eagle Man makes it hard to proportion the story correctly for a twenty-minute (half-hour with ads) format.  They should've made the Eagle Man and the Rival Psychics into two separate episodes or make this one a special extended episode.  There wasn't even time for me to have some sort of emotional connection to the one off characters.

Other than that, effects in this episode are quite good, I liked what was going on in the evil lab, I liked the computer scenes and I especially liked Eagle Man as he is one mean looking motherclucker.  The fight scenes were also decent, not much combat but I did like how they were used and I just loved how they made Kamen Rider ride on Eagle Man's back in the final fight scene.  Seeing Kamen Rider fly on Eagle Man's back looked very natural and also very dangerous, it looked like Kamen Rider's actor (or stunt double) would've killed himself if he had fallen off.

Overall, not a terrible episode but I'd wish that it was longer so all of the story could flow way better.  I'm giving this one a 6 out of 10.  Anyway I'm Kaiser-Sensei AKA Dark Rider and I'll see you next time for a look at Episode Seven of Kamen Rider Black. HENSHIN!
Posted by Retrokaiser at 12:18 AM