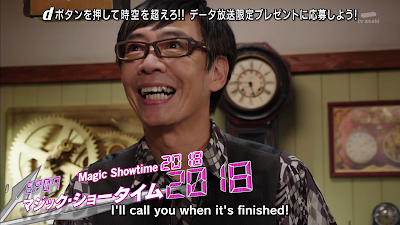 Seventh episode of Kamen Rider Zi-O is here!  This also means that it's the start of a new story arc.  Who will Zi-O cross over with this time?  Find out in my summary and review of this episode.  (Click on "Read More" to read the full thing). 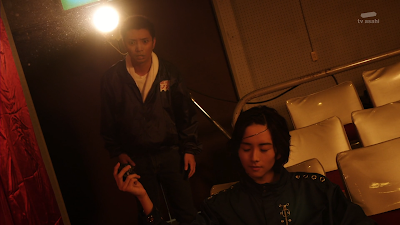 This episode starts in the year, 2012 and it's Christmas!..  A pretty sad Christmas, a magic show is going on and barely anyone has shown up to watch.  One of the stage hands named Hayase gets pretty frustrated and trips over a light but before it can hit the ground, TimeJacker Uhr pops up, makes Hayase a offer he can not refuse and he becomes an evil kamen rider, Evil Wizard.  Back to the present we see Sougo returning home from school and sees his uncle fixing up a VHS player and going on about how no one brings in clocks to their clock repair shop.  This leads to them talking about a magician, Wizard Hayase, this gets Sougo all excited and he decides to go see one of his shows.  Geiz is not very excited about this one bit but he has no choice but to go, where ever Sougo goes, Geiz and Tsukuyomi have to go as well.

While getting drinks, Sougo runs into Woz and Woz is very excited to see him but doesn't like how his king is hanging out with people who are in charge of trying to put a stop to Sougo.  Yeah, nothing much happens here but I do question why Woz is there in the first place...  Okay, I don't as Woz is always around following Sougo.  Our heroes sit down and the magic show starts and Sougo likes what he sees but Geiz notices that Wizard Hayase's magic is stolen power from Kamen Rider Wizard.  After the show they confront Wizard Hayase behind the building and IT'S HENSHIN TIME, BABY!  Geiz transforms into Kamen Rider Geiz and Wizard Hayase transforms into Evil Wizard but instead of the bad guy attacking our heroes, Evil Wizard is defending himself and questioning to Kamen Rider Geiz about what did he did wrong? 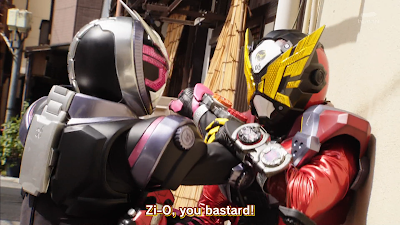 Sougo morphs into Kamen Rider Zi-O and holds back Kamen Rider Geiz from attacking the defenseless and confused Evil Wizard.  Evil Wizard becomes more scared and confused and escapes from the battle while Geiz tells off Sougo.  Sougo and Geiz have two different opinions of Evil Wizard.  Sougo notices that Evil Wizard is not like the other evil kamen riders and that he has more control over himself and is not dangerous.  Geiz just wants Evil Wizard defeated simply because he is one of the evil kamen rider and then he runs off in search for Evil Wizard.  Geiz gets more than what he had bargained for as he runs into TimeJacker Schwartz and Schwartz doesn't mess around, he freezes Geiz and drops him off of a tall building.  Geiz isn't doomed though as in mid-fall he is saved by Woz... Woz?  Didn't see that one coming.

Woz reveals that the only reason why he saved Geiz was because that Geiz is an old friend of his.  Schwartz doesn't like this and warps off to make new plans and Geiz hates this even more and starts arguing and attacking Woz.  Woz gets the best of Geiz and flies off, leaving Geiz quite made, so Geiz storms off in anger.  Wizard Hayase makes it back to his home but he is not alone as TimeJacker Ora is there and she makes him an offer to become a demon king but before anything else happens, Hayase's friend pops up.  Our heroes are investigating the place that Hayase works at and find out that they need to time travel to Christmas of 2012 to put a stop to Evil Wizard.  Hayase is hanging out with his friend and gets some bad news, the stage that Hayase likes to do his gigs at is getting closed down and his friend is also engaged to the woman that Hayase likes (she's also his boss).  Hayase goes berserk, turns into Evil Wizard, starts chasing his friend, catches him, sets him on fire and pushes him down some stairs. 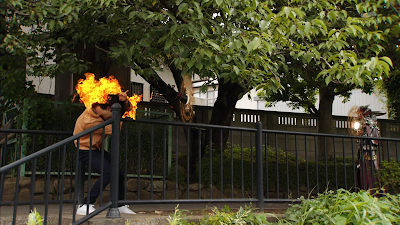 Geiz just happens to hear cries for help, so he rushes off and sees Evil Wizard attacking his friend.  Geiz tells off Evil Wizard and says that's exactly what was going to happen if Hayase kept those corrupted powers.  Geiz is about to morph but gets distracted by a onlooker that has kamen rider watches/medallions but doesn't get distracted for long.  IT'S HENSHIN TIME, BABY! Geiz turns into Kamen Rider Geiz and gets into a fist fight with Evil Wizard.  Woz warns Sougo about this entire fight, so Sougo and Tsukuyomi go off to help Geiz.  Kamen Rider Geiz tries to finish off Evil Wizard with his ax but Evil Wizard changes the gravity and throws fireballs at him.  Geiz makes a comeback by powering up into Faiz mode and defeats Evil Wizard with a flying baseball slide.

Before Kamen Rider Geiz gets to interrogate Hayase, Kamen Rider Zi-O pops up and holds back Kamen Rider Geiz.  The two get into an argument and nearly into a fight but Tsukuyomi stops that from happening.  Sougo and Geiz keep on arguing but then they get frozen as Ora re-appears and re-activates Evil Wizard.  Evil Wizard starts to escape but Tsukuyomi tries to stop him but Evil Wizard puts her to sleep.  Geiz and Sougo rush over to help but they can't wake her up and that's how this episode ends. 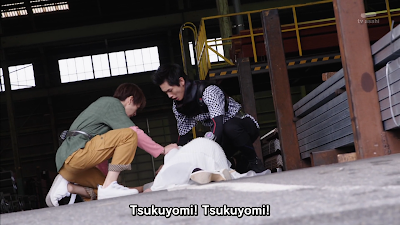 Nothing much happened in this episode at all.  You did get some good main storyline progression and got to know some of the bad guys a bit more but the rest of the story wasn't all that interesting.  I didn't really care for Wizard Hayase, he was a very plain character and his story really doesn't mean anything.  This all could change in the next episode and I really hope it does as this storyline has been nothing but filler so far...  Okay, filler and one really nice piece of story progression.

The effects in this episode aren't great but they were entertaining and I liked how they were used. Best examples were the magic show scene and the part where Wizard Hayase/Evil Wizard set his friend on fire.  Other than that, action was very basic and not great.

Overall, weakest episode of the season so and I do hope that it gets better in the next episode.  I'm giving this episode a very average score of a 5 out of 10.  Until next time!  This is Kaiser Sensei saying, so long, don't forget your toothbrush, and HENSHIN!
Posted by Retrokaiser at 12:11 AM