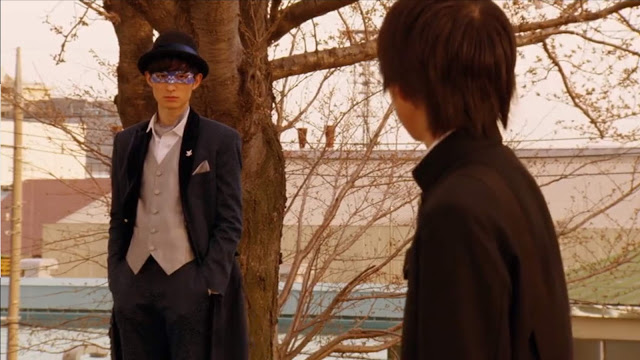 Yo yo, it is Cendoo (Red Diamond) back again with the twelfth episode of this double sentai season. The last two episodes have been stinkers, especially the last. So, standards have hit an all time low. How will they recover from the drag filled mess? Click "read more" and let's see if they do.

The episode begins with some kid named Yuuki practicing track and being super upset with his time of just of 13 seconds. Then cuts to the Patrangers getting an alarm about a new Gangler. That was abrupt. Most likely foreshadowing. This Gangler is different though, it is not staying in one place and waiting for them. Who ever heard of such a strategy? It is on the move, heading towards a school then cut to intro. Well, that was a wake up slap of a begining. Not wasting anytime. Usually these be intro scenes stretch around 4 minutes but this was only 1. 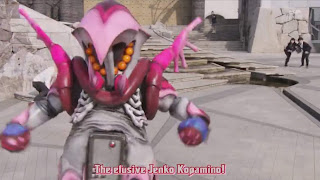 Continuing this episodes tradition, no time is wasted showing the new monster of the week. Jenko Kopamino! He runs really fast and leaves explosions in his tracks. But just wouldn't be a children's villain if he didn't stop in his tracks to announce himself. The Lupinrangers show up first who don't even bother doing their roll call this time, with Yuuki watching everything in hiding. Must have been free coffee day in the writers room.

LupinRed and LupinBlue start praising Jenko for his speed which makes him lower his guard allowing LupinYellow to sneak up and take the treasure. Seriously! Do I even need to say it again? Well, they slap fight for it back which causes it to fall and Yuuki picks it up. 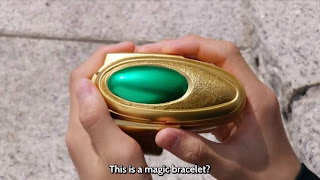 A magic bracelet that allows super fast running speed. Why does it look like a Chrono Changer? Because it was made from the same mold. Regardless of circumstances, the Gangler tries to get it back only for the Patrangers to show up leading to the typical 3-way battle. However, Yuuki runs off with the treasure leading Tooma to give chase. Without his treasure, the Lupinrangers lose interest in the Gangler and he escapes.

Things start to slow down from here a little. Tooma ( still in his phantom thief outfit) finds Yuuki and warns him that keeping that bracelet will put his life in danger. He doesn't listen, leading to a chase that can be compared to a QTE event from a video game like Shenmue. Yes, it kinda funny. This is where the drama kicks in however.

Tooma follows Yuuki to a hospital where he is visiting a girl named Haruka whom is still adjusting to being in a wheelchair. This most likely means she was just recently placed in one and it turns out Yuuki is trying to motivate her with his running speed; (which he lied and said was under 11 seconds.)

While walking home, Tooma confronts Yuuki about the situation. Yuuki pleads his case about wanting Haruka to not give up on her dreams of singing despite becoming a paraplegia. Not really sure how that would stop her but it is most likely a psychological thing. Tooma tells him that the collection item won't work for him but he doesn't believe him since it looks just like the treasure from the picture book Sein of Hinano Valley. Fun fact! This picture book is a parody of  the anime Action Heroine Cheer Fruits.

Cutting back to the Lupinrangers Bistro, Tooma is getting crewed out for failing to get the collection piece back. However, this is where we get to learn a little bit more about his lost fiancee Aya. (As a reminder, she is the one he is trying to revive by being a Lupinranger.) Normally, Tooma is a realist and doesn't believe in things like magic or fairy tales. Oh the irony. But, this particular picture book was a favorite of Aya who believed fairy tales were good at helping one deal with real life. A soothed mind is a focused after all.

Good old Kogure makes another surprise visit and tells the story as to why there is a similarity. Lupin and the author of this book were from the same era and supposedly knew each other so it is possible that the treasure in the book was based on a real collection piece. However, he confirms that most of the collection is still unusable. Meaning it will not work for Yuuki. So, Tooma requests that he retrieve the item on his own. Here is my prediction, placebo effect. He will use the item, it won't work, but he thinks it does and runs faster anyway. He does things properly, sends Yuuki a calling card.

The Patrangers are going over how to deal with the Gangler. Oh yeah, remember them? Even without his speed, Jenko still has bombs equivalent to 10kg of TNT. They get all gung ho about stopping him while the Lupinrangers are only thinking about the treasure item and what Tooma will do to get it. It is a rare time where we are reminded that the Lupinrangers aren't strictly the good guys. They only care about their mission and not the protection of the planet from the Ganglers.

Can't say he wasn't warned, Yuuki gets attacked by the Gangler. When he doesn't have his treasure, Jenko decides to simply kill him. Yuuki runs back to where he hid the treasure and it cornered by the Phantom Thieves. Once that is set up, the Gangler shows up forcing them to henshin into the Lupinrangers and begin the struggle. They still don't care about him by the way. While that is going on, Tooma tells Yuuki to take the treasure and run and that it won't work unless he believes in himself. Placebo effect.

With Yuuki's escape the fight continues on with the Patrangers and pordermen joining in. A trope even Kairi is getting tired of. 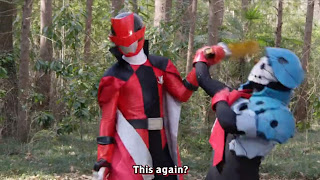 However, since the Gangler doesn't have a collection item anymore, Kairi decides to just deliver a finishing blow using his boomerang and shield combo. I didn't think about it until now but this need to steal their collection piece first is probably the first time we are given a valid reason as to why they don't just use their big moves from the start. Gangler goes boom, grows big, and it is business as usual from here.

Goodstriker appears and chooses the Patrangers while talking like Kaiketsu Zubat, (no, not the pokemon) and Patkaiser is formed. The giant battle is completely one sided and ends within a couple minutes. Another episode where they just wanted to get it out of the way.

The episode ends with the Phantom Thieves attending Yuuki's track meet. He wins with some inner monologue but feels ashamed afterwards and decides to give the bracelet back. 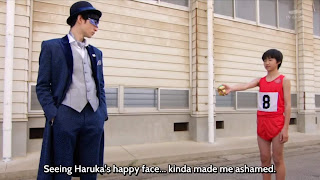 Major plot twist alert! It was a fake. Tooma reveals that he followed him to the hiding place and switched them out already so his victory was all his own. Yeah, that wasn't obvious. They exchange some emotional dialogue and that is a wrap.

This episode was okay. The pacing was all over the place and the writing was fairly predictable but at least it had a decent enough premise. It was kind of interesting to see an episode focus on a collection piece itself and not the Gangler using for once. At the same time though, the monster of the week was barely used and the main villains didn't appear once (outside of turning Jenko giant) so there was no plot revealed at all. That being said, there were some funny moments and a couple of interesting references. Moving at super speed was a signature move from Timeranger and the collection piece that was molded from their morpher was a nice nod. Also, Goodstriker doing quotes from Kaiketsu Zubat, a tokusatsu show from 1977, was a pretty obscure call back. Overall, this episode wasn't great and didn't really do anything special, but was still at least fun to watch. 3/5
Posted by Cendoo at 12:00 PM