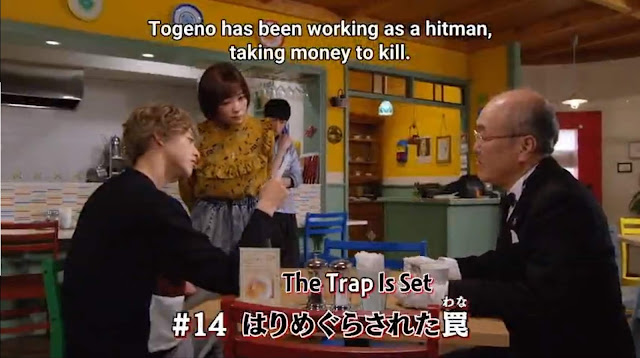 Back once again for episode 14. This episode promises a lot of drama with the Patrangers facing what could be their first major defeat. They have been out performed by the Lupinrangers a number of times but burning spirit was the name of the game in last episodes preview. What will happen? Click "read more" and let's find out.

The episode begins with the Patrangers in some rocky area investigating some sound that could be coming from a monster. This was all due to a teacher requesting it after hearing the sounds while scouting for a field trip. One particular kindergartener named Souta was super determined to try and fight the monster. This reveals Keichiiro's soft spot for children; he even forces a smile (although it was a creepy smiles). He makes a promise to the kid to defeat the monster and save their field trip, even if the kids don't like him back.

I'm starting to favor the Patrangers. Guess I'm just another sucker for the underdogs.

They discover the sounds are coming from underground and have Jim Carter look into it. Meanwhile, back at the villains HQ, we get to learn a bit about this episodes monster of the week. There is two of them this time around. First off, we get to see one, Togeno Aves. A black and orange looking Gangler who talks with a smug personality. He has asked the Main villain Dogranio to come to the human world and witness his plans unfold. 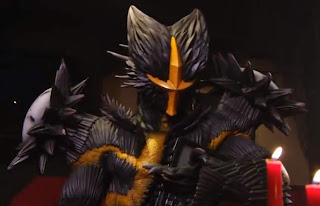 Even points out that he has teamed up with another Gangler named Odordo Maximov who is known for destroying anything he doesn't like. We got a smug one and temper tantrum twins folks. Odordo is revealed to be the younger half of the Crusher Brothers (meaning there is 3 monsters). His plan is simple, to kill a cop. He says this is how you distinguish yourself in any gang. Is that true? Sounds like it could be. Scary thought. Now, cut to intro.

Not much to say from that. It is showing potential of being a decent episode but only decent.

The Lupinrangers get their first bit of screen time. They've got a new target. Looks like our boy Togeno has a side job as a Hitman and a human form to go with it. 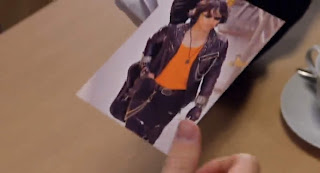 He has the power to shrink himself. A shrinking hitman. Can we call him a deadly rat? If he shrinks they cannot open his safe so, more obstacles to overcome.

Things get right into the action from here. The Patranger's car gets stopped by someone being chased by Togeno so they henshin up and get into a shootout. Why doesn't this feel right? The fight doesn't last long, out of nowhere the Patrangers starting hearing an echoing voice taunting them but cannot find who is doing it. Togeno runs off and it turns out he was chasing this random guy because he found a VS vehicle on the ground that appears to be a drill. 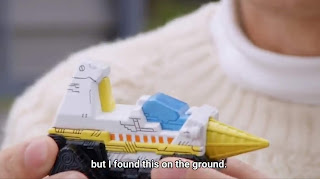 A new zord found on the ground randomly by some random civilian? Brilliant...

Jim's research on the sounds from earlier are in, there coming from a large object under the mountain that he isn't able to identify. Getting underground could be tricky though. Coincidentally Fortunately, this new VS vehicle is a drill which can be used. Typically, there procedure is to have HQ examine equipment first before usage but Keiichiro protests this and decides to go ahead with it in order to keep his promise to Souta. I'm glad somebody cares about that kid. 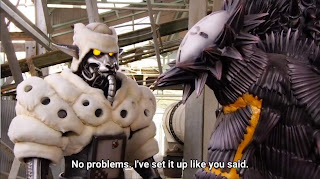 We finally get to see Odordo who was mentioned earlier. He, looks like a metal goat. He's got revenge on the mind. A flashback reveals that his older brother (who looks exactly like him except black fur instead of white) was killed accidentally by the Patrangers. During one of their giant battle, they stepped on him. That was kinda funny. But, it broke the code of never pointing out how using megazords first could instantly win a fight 0.0. The Phantom Thieves were eavesdropping. Their second scene of the episode. They are just happy to steal two treasures this time.

The two Ganglers get confronted by the Phantom Thieves (who still haven't henshined) and are stalled. Keiichiro summons his new super CG drill mech and begins his decent under the mountain. You'd think the move to CG would at least allow for some more creative designs for these things. 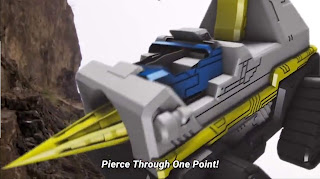 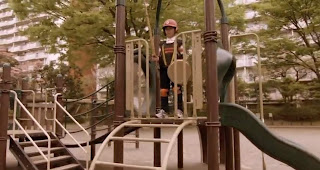 While drilling, Keiichiro has a flash back of when he was a little kid and also wanted to fight bad guys similar to Souta. During that time, an officer to brought him home and made a promise to catch the criminal who had everyone scared and succeeded which inspired Keiichiro to become a cop in the first place. Explains a lot. Also makes it kinda sad that he wasn't able to inspire Souta the same way. 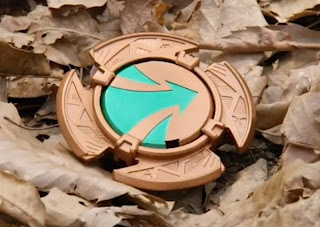 The Phantom thieves story arc wraps up quickly. Odordo doesn't have a collection piece and Togeno throws his away to distract them and escapes. They never henshin and don't care about whatever the Ganglers are planning because they've got their treasure. Which is defiantly not a Nin Shuriken.

Things aren't looks good for Keiichiro. While drilling, spikes from the smoke alarm appear and shoot him in the back. Purple glow indicates he has been poisoned and the drill stops leaving him stranded underground. On the plus side though, we get our first helmetless shot. 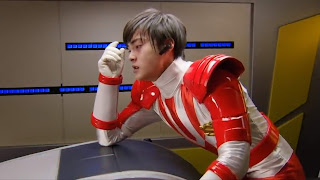 Back on the surface, the civilian who gave them the drill reveals himself to Tsukasa and Sakuya to be Odordo in disguises. I predicted that then was convinced it was wrong and now I am wrong. Guess it really was brilliant. Keiichiro, barely able to move from the poison, decides to continue on drilling because he doesn't think he will live much longer and wants to use his last bit of time to finish the mission despite the protests of Jim and Hilltop. What a guy.

A two v two fight breaks out between the remaining Patangers and the two Ganglers with Goche, Destra, and Dogranio present to watch. The main villain trio came after all. The fight is pretty even. However, in the middle of it, Odordo summons a bunch of floating cotton balls that start echoing voices the same way as before to throw them off. One more loose end tied. 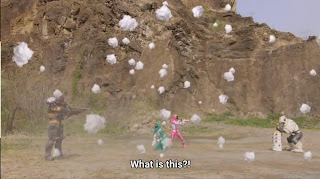 Skillfully, Sakuya and Tsukasa are able to destroy them with some teamwork and continue the momentum to destroy Odordo leaving Togeno cornered. Feeling pissed that he was dragged out there for an unworthy show, Dogranio launches his own move. All he does is tap his should which makes his blade spin and send a series of explosions onto the battlefield rendering both sides too damaged to fight. Wow, this guy is tough. Destra and him leave while Goche makes Odordo grow.

All hope seems lost when another new VS machine smashes out of the ground to the rescue. A crane. Seriously? Keiichiro survived and combined his drill with the burred crane for another new mech combination. If you can even call it that. 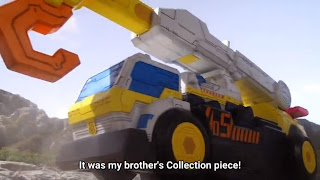 He is pissed! Pilots these new VS vehicles unmorphed and destroys Odordo. The fight consisted of the Gangler just standing there and taking drills to the foot, crane punches, and being lifted up for a finisher. A lot of fire in Keiichiro's eyes but these moves sucked. At least no Goodstriker.

The episode ends almost on a happy note. Keiichiro saved the day and won through sheer willpower but collapses unconscious in the cockpit due to the poison thus ending the episode. Gotta admit, it has got my attention.

This episode was a lot better than I excepted it to be. A lot of good character development for Keiichiro and some pretty engaging drama. The Lupinrangers offered nothing to this episode, but that is alright. They have been getting a lot of the attention recently so it is nice to see the Patrangers given some love. This is probably the only season so far where one of the main rangers (not 6th or extra) could get away with not henshining in an episode.

High points would have to be the background given to Keiichiro and seeing one of Dogranio's attacks. The monsters of the week were surprisingly interesting as well. A classic revenge story and a strategist who failed to impress. However, not all of it was good. A crane and drill are not interesting new vehicles at all. Granted most of them have been underwhelming this season, but these two were just boring. Not to say a silly mech cannot work, but that was defiantly not the right scene to use them in. I'm also not sure if these collection pieces being re painted props of past morphers are subtle references or just being cheap. Probably both. Overall, good episode. I'd recommend it. 4/5

What happened to Souta though?
Posted by Cendoo at 12:00 PM