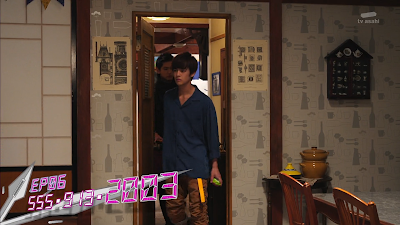 Yup! This never came out on Friday like I had planned, I've been way too busy working on the first four episodes of Kaisercade… But enough of the true excuses, here is I (Kaiser Sensei's) you know what on episode 6 of Kamen Rider Zi-O. (Click on "Read More" to read the full article unless ye be crazy!). 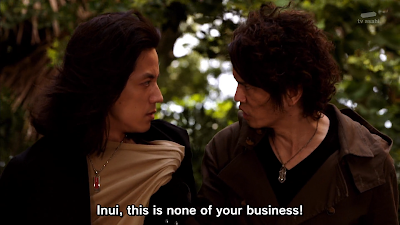 This episode opens up with our heroes fighting the newly re-spawned Evil Fourze and Kamen Rider Geiz powers up to Kamen Rider Geiz Ghost Mode.  What happened to Evil Faiz? I don't f*****g know! I'm just as confused as you are!  We return to 2018, where the brown hooded strangler named Kusaka is confronting the other mysterious person that just so happens to be Inui.  The two end up fighting and Tsukuyomi runs outside to check on Karin (the girl that our heroes are protecting) and finds that she is gone.  Sougo and Geiz return back to 2018 and back to home base where they are surprised to see Inui there.  Inui joins in on their operation and this is where we get some spicy info about Evil Fourze.  Turns out that Evil Fourze and Evil Faiz are both the same evil kamen rider, he has two powers, meaning that our heroes need to figure out the year where Evil Faiz  is from and what better way to do so, by investigating Amanogawa High School again.

Sougo and Inui run into Karin, while Geiz and Tsukuyomi are going though photos of Evil Fourze's victims for clues and they find a doozy of one.  They notice that Karin doesn't seem to age, this leaves them suspecting that she's one of the bad guys.  Sougo and Inui end up losing Karin...  She just walks away right in front of them.  Sougo and Inui go after her but run into a familiar face, that man who knows that Sougo is a kamen rider.  The man gives some very juicy information about a girl that's celebrating her birthday at school, she just turned 18 and guess what?  She is also a Libra!..  That line won't make sense to those who didn't read my article on the previous episode. 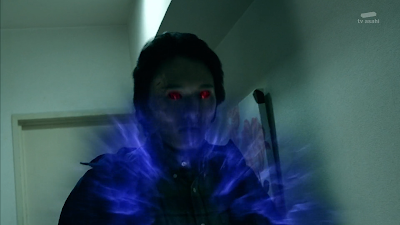 Geiz and Tsukuyomi also find a really dark clue about Karin. Karin died in a car accident back in 2003 and her body went missing and she still manages to appear in all the photos.  Also on the same day, two of her classmates also went missing.  After Sougo's Uncle comes in and goes on about how he fixed that stereo from the previous part, Geiz finally gets what is going on... Well, thinks he does.  Geiz believes that Karin is actually one of the bad guys and she wasn't being attacked by Evil Fourze, she was working with him.  This changes the case completely and also explains why she was being attacked by Kusaka and why she wasn't dead from being strangled and thrown off the building in the previous episode.

Evil Fourze has tracked down the birthday girl but before he can attack her, he is stopped by Karin.  Turns out that Evil Fourze is sucking the life out of girls because he is trying to keep Karin alive.  Kusaka jumps in and holds Karin hostage and Evil Fourze doesn't like this and brutally beats Kusaka.  Inui jumps into the battle and saves Kusaka from being beaten to death but also gets beaten up himself.  Our heroes run in and Evil Fouze runs away and Inui gives Sougo his kamen rider watch/medallion but Sougo gives it to Geiz and puts him in charge of stopping Evil Faiz. 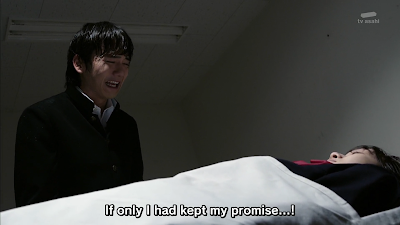 Going back to 2003 we see Sakuma (Evil Faiz/Fourze in human form) and Karin's tragic back story involving the accident and Sakuma's transformation into Evil Faiz.  Seriously, it's a very sad and tragic scene that makes you feel more sorry for Evil Faiz/Fourze than anything.  While this is happening we cut to Kamen Rider Faize losing his powers during a battle and this scene looks weird.  I haven't seen Kamen Rider 555 (as you can obviously tell) but this scene looks like it uses a mixture of footage from that series and mixes in new footage as some of the footage in this scene looks very dated.  Evil Faiz is collecting his first victims and Geiz comes in but gets interrupted by TimeJacker Ora.  Geiz explains to Ora about what happens to Evil Faiz in 2018 and she is shocked, like that everything she's been fighting for has been wrong this whole time.

Back in 2018, Kusaka explains his role in the story and that Karin wanted him to kill her, so he can save her and stop Evil Fourze from running amok and collecting more victims.  Back in 2003, Geiz is still arguing with Ora and then he goes to battle with Evil Faiz.  IT'S HENSHIN TIME, BABY! Geiz transforms into Kamen Rider Geiz and then powers up into Kamen Rider Geiz Faiz Mode... HEH, Geiz Faiz!  The two get into a game of punchies but they can't seem to Faiz each other (heh, heh, heh! I couldn't resist making that joke).  It's also HENSHIN TIME, BABY! In the year 2018, Sougo starts morphing into Kamen Rider Zi-O and Evil Fourze tries to stop this but Sougo is un-Fourzed and morphs into Kamen Rider Zi-O... Wait a sec! That joke didn't make sense!

Kamen Rider Zi-O also powers up into Kamen Rider Zi-O Fourze Mode...  This is really cool actually.  We have Faiz on Faiz in 2003 and Fourze on Fourze in 2018, a battle happening in two different times and with two different forms of the bad guy.  Karin tries to stop Evil Fourze with an emotional speech but it doesn't work and Kamen Rider Zi-O and Geiz finish off Evil Faiz/Fourze in an epic battle that doesn't make sense but who cares, it's cool looking and entertaining.  Sakuma is back to normal and is happy to see Karin.  The day has been saved! Time has been restored! And our heroes live on to see another day!.. Except for Karin, she fades away from history. 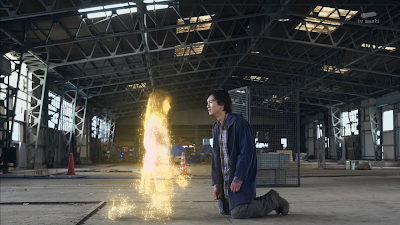 This episode wasn't afraid to go into dark and tragic places, actually, it was enjoyable, it gave some deepness to the characters and make the situation mean something.  With that said, this episode is mainly full of long talkie scenes which can be bad for a kid's action show but I can't speak for them.  I can speak for myself and say that it was well done but not perfect, there were a few weak moments in this show like Sougo and Inui investigating the school and Geiz and Tsukuyomi looking for clues.  Those two scenes were a bit clumsy and the school investigation was pointless in parts and could've been a bit tighter in the writing and editing.  Other than that, really strong writing and I hope to see more of this in the future.

This episode is also more friendly to newcomers of this franchise, it has less confusing references that only fans will get and does a great job at making me want to watch Kamen Rider Fourze and Kamen Rider 555...  Yes, I do see the pun in having a crossover between FOURze and 555... Now only if they went in and added Kamen Rider 000, then we'd have a real numbers game. 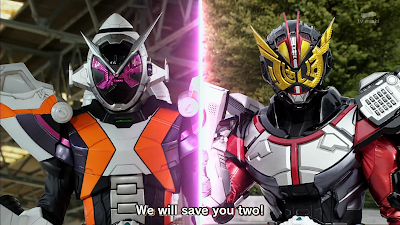 There was even less action in this episode than the previous episode/part but it was much better used in this episode.  The violence got brutal in the Evil Fourze and Kusaka fight and just seeing and hearing those headbutts was painful.  The final fight scene was really well done, seeing two kamen riders fighting the same guy at two different points of time was very unique and made for a really strong highlight for the series.

Overall, a really good episode and a really good closer to a confusing story arc.  This episode gets a 7.5 out of 10.  Yup, just misses out on getting 8 out of 10 because of the scenes I didn't like.  This whole arc gets a solid 7 out of 10.  That's it for this edition of Kaiser Sensei's Kamen Rider Zi-O detailed summary and not so detailed review series.  I'm looking forward to episode 7 as it's going to be a crossover with a kamen rider I've actually heard of... But you'll have to wait.  Cheers, guys and HENSHIN, BABY!
Posted by Retrokaiser at 12:44 AM