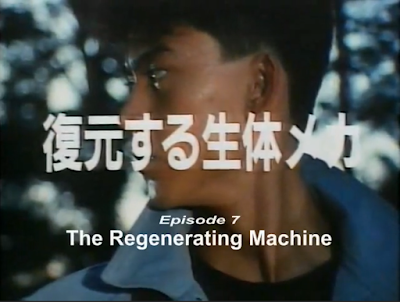 You know what time it is?  It's time for a lazy intro for a not so lazy article about the seventh episode of Kamen Rider Black.  What can you expect from this episode?  How about a tale of a man's love for his motorcycle.  That's all that I'll say in this intro, you'll need to read the full thing to get the full idea about what goes on in this episode...  And what Kaiser Sensei has to say about it.  (Click on "Read More" to read the full article). 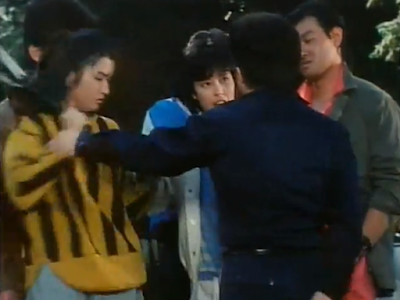 Episode seven opens up with two girls going out to buy some crapes but they are confronted by a bunch of Weinsteins (sleazy guys) who hit on the girls and then try to kidnap them.  Lucky for them, a guy named Morita shows up and tries to save them.  Kotaro ends up joining the battle and ends up saving him and the girls.  Morita is mad that the gang of Cosby's got away and Kotaro tries to calm him down but fails, Morita just storms off.  Just take a wild guess who is watching this all happen?  If you've guessed Goldar then you'd be wrong, he is from Mighty Morphin Power Rangers. No, it's the Golgum who are keeping a sharp eye on them.  Kotaro also picks up Morita's drivers licence and decides to go give him a visit.

Once Kotaro makes it to Morita's place, Morita's sister tells Kotaro about why Morita hates gangs so much.  It's because that both of his parents were killed in hit and run attacks by vehicles driven by gangs and has sworn to go all Punisher on their a****s.  I can't say that I blame him for that, I'd be that angry too if that ever happened to my family.  Meanwhile, Morita is at a secret meeting hosted by the Golgum, whom have gathered a bunch of vengeance seekers like Morita into joining forces to make a group dedicated to stopping gangs...  So, a gang that fights gangs, I do not like where this is headed.  The group all drink up drinks that the Golgum are serving, then the Golgum show the group their reward... A room full of bright light and dancing little girls... Obviously this is meant to be heaven and inner-peace for the group.  The group starts dancing with the children but then it cuts to what is really happening with them.  The group is really dancing around in the dark and looking very silly doing so... Yup, they shouldn't have drunk the Kool-Aid that was served to them. 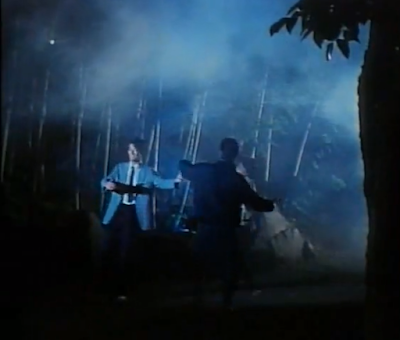 The Golgum are the real ones laughing and celebrating as they've tricked the group into becoming their own personal assassins but they can't rest easy yet, they are aware that Kotaro's already putting the pieces of the puzzle together.  The Golgum also like the situation, they can get their new assassins to fight Kamen Rider, plus they also have their monster of the week as a backup and the monster of the week is... Rocksteady from Teenage Mutant Ninja Turtles but naked... Nah, it's just a giant mutant Rhino, which isn't much different.  Although if this were to have a TMNT crossover the... GAH! NO! NOOO! Having nasty flashbacks to the Power Rangers in Space crossover with TMNT.

The Golgum send their newly brainwashed assassins into beating up a gang and they beat them to a pulp and drive off.  The gang they just beat up aren't happy and they try to call their other members into getting into a car chase but before they can do that, Mr. Naked Rhino shows up and murders the f**k out of them.  It's the next day and Kotaro reads about the murders in the newspaper and goes off trying to search for the gang slaying gang.  Doesn't take Kotaro long to find them, they were right around the corner beating up some people under a bridge.  Kotaro chases them down and tries to convince them to stop though acts of non-violence and friendship but out comes Mr. Rhino and they all gang up on him!  Kotaro has no choice but to fight. 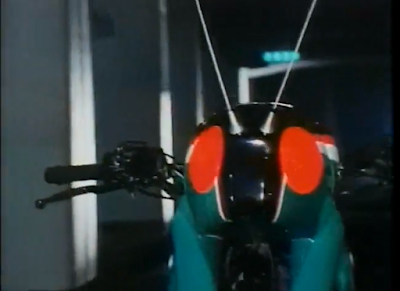 It's henshin time!  Kotaro transforms into Kamen Rider and stars slapping that Rhino but has to chase the Golgum because they are getting away.  Mr. Rhino fights dirty, he throws one of the brainwashed assassins into Kamen Rider and then gores them, hoping to kill them both.  Battle Hopper drives in and blocks Lord Rhino's attack but this didn't work out as well as Kamen Rider had hoped.  Lord Rhino throws Kamen Rider though a concrete beam and the roof collapses... Has our hero been defeated?  Yes he has but he is still alive because Battle Hopper saves him by taking all the damage from the collapsing roof, now Battle Hopper has been destroyed!  A very emotional scene and a huge loss to our hero.  Rest in peace, space cowboy.

Kotaro is very sad but suddenly something amazing happens, we find out that Battle Hopper is no ordinary motorbike... I mean, no ordinary super hero motor bike.  Battle Hopper is also a living creature and has the awesome ability of regeneration and fixes itself up in a very cool looking scene.  Kotaro is now full of tears of joy and starts hugging and kissing his bike, only for Battle Hopper to show his appreciation back by shaking with joy and blushing with his lights.  A very adorable thing to see and I am glad that Battle Hopper is back.  This moment also adds a new layer to the Battle Hopper, making it more interesting than it was before. 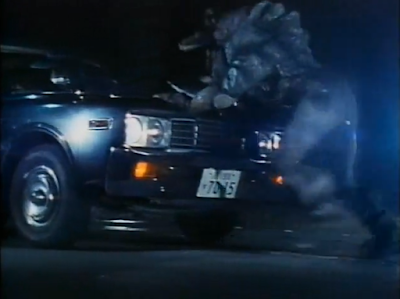 Later that night, Kotaro's words finally gets to Morita.  Morita snaps out of his trance and gets the f**k right outta there by stealing a car and plowing though everything that's in his way.  Once Morita breaks though the gate, it's all smooth sailing but not for long, Mr. Rhino shows up, flips the car with Morita in it and nearly kills the guy.  Lucky for him, Kotaro shows up in the nick of time and pulls him out of the wreck, only for Morita to die in his arms... Or did he die?  This scene isn't very clear with that but anyway, Kotaro hears a voice in his head that's calling him to meet up with the Golgum at the docks.  Kotaro shows up and notices that it is quiet, too quiet, then Lord Rhino shows up and he is holding the other two brainwashed teens as his hostages.  Lord Rhino plays dirty again and throws the two hostages at Kotaro but he catches them but once he does, Lord Rhino does a cheap gore attack.

The day is saved! Lord Rhino has been stopped! Morita is at the hospital alive and well! The brainwashed are free! Everyone has learnt their lesson! It's happy days and also the end of the seventh episode of Kamen Rider Black. 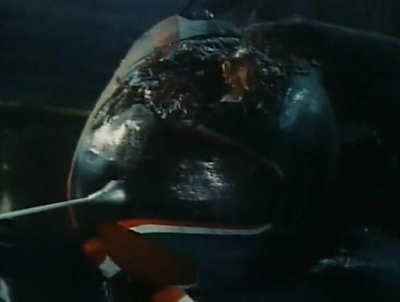 Pretty decent episode this one was, I liked the story and how it had a point and taught a lesson about how revenge is dangerous and violence isn't always the best option.  This episodes one-off characters were also pretty good, they gave you a reason to have some emotional investment with them to which added to the drama and suspense of this episode.  Lord Rhino was also a monster that wasn't anything to mess around with, he was vicious, he was cruel, and he was just plain dangerous.

I also did like how we got a interesting twist with the show by adding some character depth to Battle Hopper, something that didn't need any depth to begin with but I liked what they did as they made the fights to feel like there's more at stake.  Seeing the way that Battle Hopper acted in this episode was just plain cute and adorable.  I loved the different scenery in this episode, it is full of variety that adds fun and enhances the atmosphere. 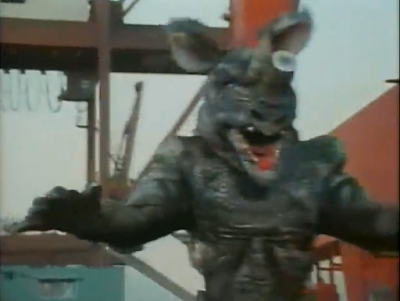 I liked Lord Rhino's costume design, it looks like something that you don't want to meet down a dark ally although it does also look incredibly rubbery.  I did like how this episode added some new effects, like how Kotaro's face goes green before transforming, it reminds me of the 1970's Incredible Hulk TV series, it has that television charm.  The best effect in this show was Battle Hopper's regeneration scene, they did a great job at making the bike look like an organic being as well as being a metallic one.  Not going to lie, this scene was also a little gross as you see it's insides and bug parts grow (eewwwww).

Overall, I had my doubts with this episode as the intro was a little underwhelming but it grew (no pun intended) into a pretty decent episode with some great action, drama, and a lesson to learn.  I'm giving this episode a 7.5 out of 10.  Anyway, I'm Kaiser-Sensei the Black Diamond and I'll see you another time for my look at Kamen Rider Black Episode 8: The Devil's Trill.  HENSHIN!
Posted by Retrokaiser at 11:05 PM