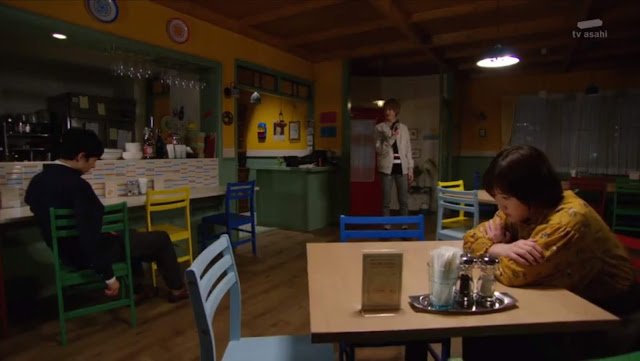 Hello all, Cendoo here again for some more Super Sentai reviews. Last episode was a little disappointing, but let us not lose hope. The preview showed this one will finally explain the tale of Kairi's lost loved one, his older brother. What will happen? Will he break down in tears? Click "read more" and let's take a look.

The episode begins on an innocent note, a daily routine for the Lupinrangers before opening their Bistro. However, Kairi finds an article about Emma Gordini, a famous French designer who happens to be in Japan and has a Lupin Collection item she wears around her neck as jewelry. Well, that was convenient. Kogure tells them it resembles a lost piece of the collection, so they begin an investigation. 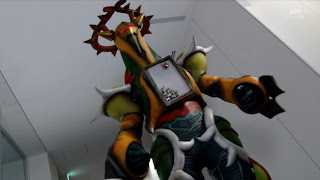 No time is wasted on that though. Pretty much as soon as the Lupinrangers start spying on Emma she is attacked by this weeks new Gangler (monster of the week). An interesting looking green deer like thing. Name is Bletz. Not a very flattering name. 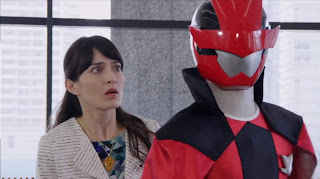 The Lupinrangers quickly morph up and jump in to try and protect her. The fight is a game of cat & mouse and even ends up on an elevator. That is a first. However, once this Gangler points out that they are also after the necklace, Emma runs off leading to some funny dialogue and another chase. Que theme song.

That was the shortest 4 minutes of my life. Talk about a good paced beginning.

Emma is chased outside and surrounded my portermen when the Patrangers show up to save her. In the middle of all that, Kairi shows up dressed as one of the security officers and escorts her away. If you're wondering where he got the uniform, he stole it from someone the Gangler knocked out. 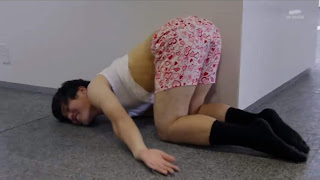 The Patrangers confront the Lupinrangers and Ganglers battle leading the latter to believe that Emma escaped so he leaves as well. Kairi tries to buy the pendant off of Emma but she refuses to give it up because it is a momento of her grandmother and mistakes him for one of her sisters people. I smell a sibling rivalry story unfolding.

The Patrangers come up with a plan to make a fake pendant to lure out Bletz and keep his attention away from Emma. Meanwhile, the Lupinrangers bring Emma to their Bistro and learn she is a runaway from home in order to rebel against her sister. She tells the story about how she used to look up to her older sister but later felt like a failure compared to her which strikes a cord with Kairi who had a similar relationship with his older brother.

Following the story, Kairi takes an uncharacteristic serious tone and tells Emma she should go see her sister before it is too late. This is obviously reflecting on his own regrets about his brother dying before they made up.

The Patrangers fake exhibit is advertised on TV. The Lupinrangers instantly figure out this plan (except Umika) and plan their next move. Kairi will stay behind to try and get the pendant while the other two pursue the Gangler. Amazingly, the plan works, Bletz shows up to steal the fake pendant and is ambushed by the Patrangers. 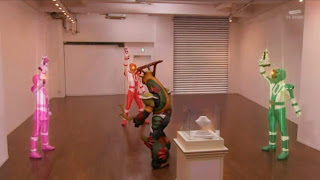 Shortly after, Tooma and Umika bust in and the fight begins, only to cut away. This season really loves to tease. Well, we are following Kairi now who is still following Emma. She figures out his identity and surprisingly, Kairi tells her the truth about his motivation to bring his brother back to life. A touching moment, but it is interrupted by Destra who found them. Kairi attempts to fight him off by himself, even revealing himself as Lupinred but is overpowered and finds himself and Emma trapped in a building behind ruble. While inside, Emma decides to give him her pendant, giving in to all this sibling talk.

Once again however, this touching moment is interrupted by Detra who smashes his way inside. He has the power sure but just falls flat of being scary. So, without even knowing what it does, Kairi activates the collection item where it reveals itself to be scissors. Scissors? 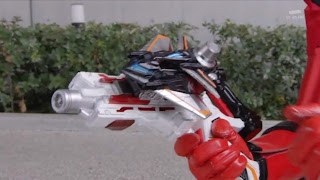 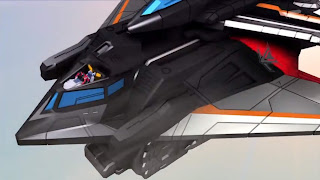 No, not a new pair of snipers, this is actually a new mech for him. A cool looking black jet actually. Destra gets mad, summons another giant golem to fight him and then just leaves freeing Emma to do the same. That was kinda lame. Is there some code where they don't want the treasure if a ranger uses it first?

Another quick cut away takes us back to the Gangler fight. Lupinblue and yellow are struggling to get close enough to steal the treasure while fighting the Patrangers. The fight shows off some more cool camera angles and ends up a repeat of episode 6 with Keiichiro launching a finishing blow while the Lupinrangers try to steal the treasure before it lands. Only this time, they are too late. What! 0.0 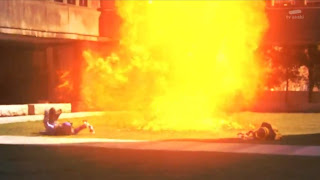 Tooma and Umika are shocked and horrified as they now believe their mission is a failure and wish will never come true. Dramatic music is playing. The Patrangers move in to try and arrest them as well but are interupted by the giant battle going on. The Patrangers form PatKaiser and join in the battle. They exchange blows with the Golem but ultimately lose, freeing Kairi to finish him off with his new blade and scissors mech. There are some serious balancing issues here.

The golem is defeated with Emma watching on and finally giving her sister a call. At least there is one happy ending.

Kairi returns home eager to show the others the new treasure item but finds them sitting in the dark full of gloom as they tell him what happened. He is in total shock and thus ending the episode on a super sad note.


This episode was fantastic. The pacing never dragged, the story was super engaging, there was great character development, and the ending was an amazing cliff hanger. This was the first true defeat the Lupinrangers had to endure. Burns even more considering how close they were to a big victory. One that has no way of coming back from and it could very well mean the defeat of their mission. I really don't have much to say. This is one of those must see episodes, nothing I write can do it justice. 5/5
Posted by Cendoo at 12:00 PM