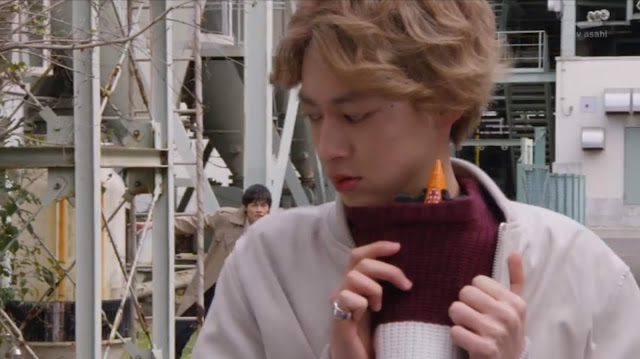 Hey, it is Cendoo back with episode 8 of this very long titled season. Oh boy! It has finally happened. The Patrangers have caught on to the Phantom Thieves identities. Will they get away with that? Will they be exposed and arrested? Hurry up and click "read more" so we can find out.

The episode begins with business as usual; the Lupinrangers have cornered another Gangler. This is quickly interrupted however as we cut to the Patrangers HQ where Tsukasa is making her case about the three from Bistro Jurer (The Lupinrangers restaurant). She noticed similar mannerisms from the three that the Phantom Thieves were doing which made her suspicious. As such, a quick background check is done on all three of them. A pretty cleaver way to give the 3 Lupinrangers some more backstory development. 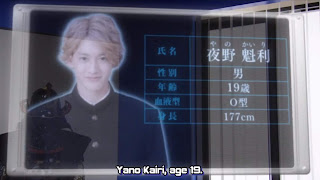 Lupinred. Dead parents and was raised by his older brother. It is implied that is who he is trying to bring back. After graduating he started working at the Bistro as a live-in employee. 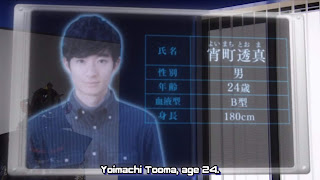 Lupinblue. Once a chef at a famous French restaurant Ciel Bleu, he quit after his fiancee allegedly ran out on him. We already know she was taken out and he is the loved one he's trying to bring back. Was picked up by the Bistro afterwards. 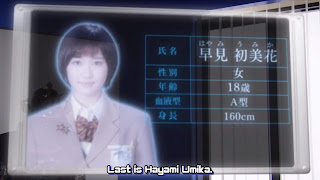 Lupinyellow. A high school drop out of Kohakugaoka Girls High School. A place with an unsolved case of disappearing students. We know what happened to them sadly. Her best friend was one of those victims and she is trying to bring her back. Sakuya is defending her, but only because of his crush.

An interesting case, but without solid proof they can't do anything to them. So, Tsukasa decides to keep an eye on them secretly to find the evidence. The theme song hasn't played yet and I am already invested. Cutting back to the fight, the Lupinrangers deal good damage but the Gangler escapes, thus cut to the theme.

The stakeout has begun. The Patrangers are all keeping an eye on their counterparts while the Lupinrangers are running their restaurant while trying to figure out the Gangler. All the while, Sakuya is protesting in defense of his crush. 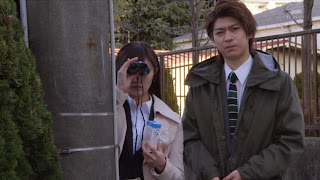 Kairi almost gets caught, but Goodstriker appears in his shirt somehow to give him a warning. How did he not notice that thing fly into his shirt? This is getting silly. 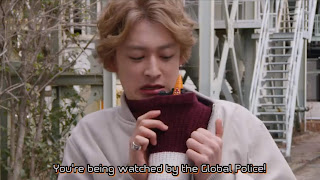 Well, they know they're suspects now and begin frantically thinking of what to do next. Goodstriker helped them out of an obligation to protect the Lupin Collection and their capture would have meant trouble for that cause. If you're wondering why he is helping the police, it is because he says he cannot resist acting on a good feeling about people. Whatever that means. I will give credit though, this is probably the first time I am seeing Goodstriker as likable.

Sakuya has a plan. He will leak false information about a Gangler to Umika and if the Phantom Thieves show up than they are guilty. He is doing this to try and prove her innocent but it could very well have the opposite effect. Goofball green gets his spotlight. Sadly, poor Jim Carter has to be the bait. As we all know, successful phantom thieves are known for being gullible. 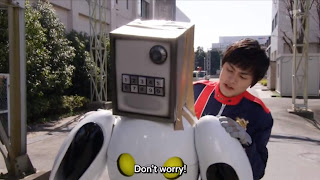 Well, the trap is set and it looks like to worked. The Lupinrangers do show up. However, Umika and Tooma are still in the restaurant. I have a feeling that Lupinred's multiply trick will be used for the second time. Poor Jim Carter is not set programmed to fight and it in quite the panic. So, he says to get it they have to solve a riddle, and somehow that actually slows them down. The riddle: "it sticks to monaka and manju but doesn't stick to dorayaki". I have no idea.

Tsukasa is not convinced yet and rushes inside to confront them. And, they are still there, even Kairi shows up. Well, now I am intrigued. She, shamefully, admits to being wrong and their identities are protected for now. Back at the fight, Jim runs off and accidentally finds out where the real gangler disappeared to.

Well, secret is out. The Kairi we saw at the restaurant was just Kogure in disguises. A weird mask and platform shoes. When did this series turn into Mission Impossible? 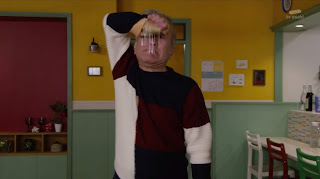 Lupinred reveals the other two Lupinrangers to be his copies in disguise. The power he gets from Goodstriker. Shocking twist. More importantly though, he finds the secret door from earlier and discovers a place where Goche was planning to do live human experiments. There is always a psychopath. Kairi engages with Keiichiro joining in soon after catching up.

The fight is a bullet storm with Goche dodging everything and creepy laughing the whole time. She reveals two of her 3 collection piece powers, one gives her the ability to see everything about someone (binoculars) the other turns things into giant, this time not a gangler but some of the Pordermen. All the while Keiichiro manages to save the captured people.

The fight turns giant with the Lupinrangers getting the Megazord this time. There goes my theory. The Patrangers haven't gotten any morphed scenes yet. Now, a Porterman or 5 is no match for them even with a ganglers help. So, they come up with a last resort plan of attack, a tower spear thing. 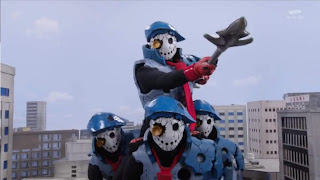 And, it fails miserably. They are easily defeated and all is wrapped up. At least this time the one sided fight made sense.

The episode ends with everyone reflecting on what happened. Kogure says he will investigate those binoculars but leaves with a suspicious look on his face. As for the Patrangers, they decide that since a ganglers base was destroyed and people were saved it was a job well done, but both teams are still thinking about that riddle. Jim promises the answer will come after the credits. But, before that Hilltop figures it out. Lips. When you say monaka and manju your lips stick together but don't when you say dorayaki. That is a good riddle.

Not really sure what to think about this episode. The beginning had some great build up for an interesting plot but it never really went anywhere. The Patrangers were fooled pretty easily and their plan was made off screen. Also, even if they were still at the restaurant it still would have been suspicious that the Lupinrangers showed up at their fake Gangler sighting since it was fake information that only they knew. That is a big plot hole. It also was kind of lame that the Patrangers didn't get any morphed screen time at all in this episode. They felt more like a supporting cast this time around.

However, that is not to say it was all disappointing. There were some good good moments with Goche and Kogure. The latter is up to something and Goche is shaping up to be quite the threatening enemy. Overall, this episode has problems, defiantly, but is still solid. Nothing about it made me rage or lose interest. 3/5
Posted by Cendoo at 12:00 PM