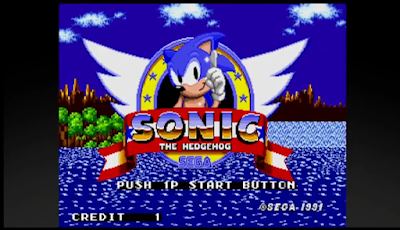 Today's game review is of a game that we all know and love, Sonic the Hedgehog.  Why do I feel the need to review this masterpiece of a game? It's because this game just got re-released for the Nintendo Switch...  Yeah, you are still questioning my choice.  I know, I know, Sonic the Hedgehog has been released on everything, it's on PC, Sega Saturn, Tiger Electronic, Sega Dreamcast, and that one bizarre port that Guru Larry talked about (ech! I hate mentioning Internet celebrities in my articles! Even the ones I like!).  Yup, Sega were re-releasing it like crazy and this was before they started porting it to Nintendo, Microsoft, and Sony consoles.  Heck!  This game even got s****y ports for the Game Boy Advance and the Apple iPod.

So what's so b****y special about the Nintendo Switch port?  Other than adding moves from Sonic-Mania (Aussie! Aussie! Aussie! Oi! Oi! Oi!) it has the arcade version that came out on Sega's Mega Play hardware.  Yes, I'll be reviewing the arcade version of this classic game and only that.  Thank you for pretending that the title of the article didn't spoil the version of the game that I am reviewing.  (Click on "Read More" to read the full article).


Note: Sorry for the lack of screenshots!  All of the press kits only had pictures of the Mega Drive version.

There are no changes in the story for this port, you are still Sonic the Hedgehog and you must save the World from Dr. Robotnik.  Okay, no changes isn't exactly true as one of the endings has been cut out.  Why? Well, I'm going into more detail about that when I talk about the gameplay.  The ending cut isn't a big deal to me anyway and I'm sure it'll be the same for most Sonic the Hedgehog players.

Sonic plays just the same and the goal is to reach the end of each stage and beat Robotnik at the end of each zone... However there are some big differences in this version.  Each level has a countdown timer, so you must beat each stage before the time runs out.  You have no time for sightseeing, the timer is pretty tight, so you'll really need to haul a**.  The levels have also been altered, some paths have been blocked off, less rings to collect, and more baddies are thrown into the stages making the game much tougher than it's Mega Drive counterpart.  It's not just some of the rings that have been removed, it's also levels.  Marble Zone, Labyrinth Zone, and the level before the final boss has been removed and I'm guessing it's because that they don't work with the countdown timer system due to their maze like structures.  A part of me is glad that they didn't make it but a part of me is also sad.

Two things that have been removed completely are the bonus stages and the chaos emeralds and I'm not a fan of this change what so ever.  Collecting the chaos emeralds is perfect for an arcade release like this, you could dominate the high score board if you could get them all.  Another stupid thing is that the bonus stage ring is still in the game!  You can jump in it but it won't take you anywhere special.  The last big things special about this game is there is a high score board that shows up during the attract mode and you can continue after you've lost all lives.  I find the high score board very charming and fun to look at.  Yeah, I know that you get continues in the original Mega Drive version but you had to earn them, in this you don't but you do need to insert a coin to get a new credit.

I played this game on a setting that the arcade version is supposed to play but this Switch version does have special options.  Exclusive to this Switch version is the ability to spin-dash, drop-dash, level select, and replay save.  This adds a lot of replay value, especially if you are a competitive speed runner.

Nothing much new with the graphics here other than seeing the Sega Mega Play boot-up intro, a high score board, and different item and baddie placements.  The rest of the game looks the exact same and that's a great thing as this is a very stunning looking game, even to this day.

The soundtrack is also the same and just like the graphics, it has aged incredibly well.


Overall, this is a fantastic arcade conversion of a fantastic game.  I highly recommend getting this port just for the arcade version alone.  Sadly, it's not as good as the original Mega Drive version but who cares as it's still a version worth your time and money.  Sonic the Hedgehog Arcade gets a very great score of 8.5 ot of 10.
Posted by Retrokaiser at 12:52 AM