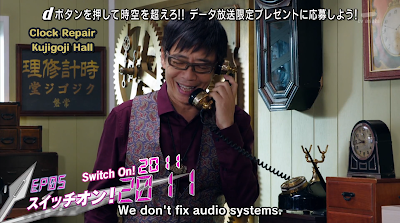 No fancy intro for this article other than me saying that I am posting a Kamen Rider Zi-O article late again.  Yup, this is I (Kaiser Sensei's) summary and review of Kamen Rider Zi-O Episode 5: Switch on 2011.  Enjoy. (Click on "Read More" to read the full article). 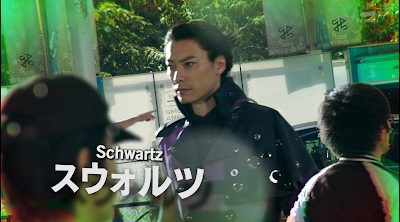 This episode opens up with the time jackers (Ora and Uhr) arguing and then warps in a third time jacker named Schwartz and he reminds the two what their mission is and warps off.  Cutting to Sougo, he hears two friends talking to each other and he gets emotions and has flashbacks of Geiz and Tsukuyomi and that's it...  But I have a feeling that these emotions will lead to something in this episode, whether it'd be big or small, I'm sure that we'll find out later.  Sougo returns home and talks with his uncle and then he gets excited as he sees that Geiz and Tsukuyomi are going out to investigate something strange, Sougo get even more excited because he gets to go with them.  What's the strange thing they are investigating?  It's just a small case of high school girls are disappearing from the face of the Earth!  The thing that our heroes have figured out is that the thing they all have in common (besides being female) is that they are all 18 years old and have a star sign of Libra.

Our heroes have a strong suspicion that they are all targets of evil kamen riders and they all go undercover as students at a high school (not the one that Sougo goes to) because this is where they think that the evil kamen riders will strike next.  Where do our heroes go from here?.. They go around asking girls if they are 18 and Libra.  They aren't getting anywhere so Geiz decides that he is going to hack the school computers to get student info.  Sougo finds a way to help out Geiz... He just falls down a lot of stairs and writhes in pain (good going, Sougo).  Do not worry, this wasn't done for the sake of being silly, Sougo did this to get the school nurse to come out.  This distraction gives Geiz and Tsukuyomi time to sneak into the nurses office and access her computer (good going, Sougo). 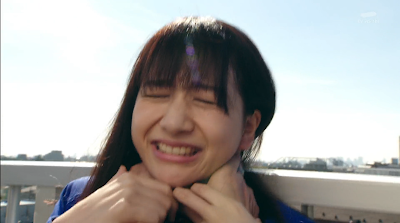 Geiz and Tsukuyomi find the information about the girl they need to protect, all while Sougo manages to run into the girl while he is getting up from the ground.  Sougo tries to talk to the girl but she runs off, so Sougo chases her but along the way he runs into Woz.  Woz doesn't have many hints to give to Sougo about this case but he does have one very vague piece of information, that's this case has something to do with a shooting star.  Woz disappears and the girl gets strangled and thrown off of the building by a guy in a brown hoodie... That got dark for a minute there.  The girl ends up surviving because she is saved by Evil Kamen Rider Fourze (another Kamen Rider show I have not seen) and IT'S HENSHIN TIME, BABY! 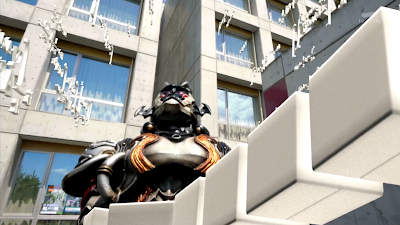 Despite being strangled, thrown, and beat, the girl is fine... For now!  Bad news for Sougo and Geiz, they have been outed out as kamen riders by two strange students. Our heroes have no need to fear as the two students are part of a kamen rider club.  Our heroes get shown around the club and this is when Sougo finds out what the shooting star clue is all about as this shooting star is a person named Ryuusei.  Ryuusei joined the kamen club back in 2011, Evil Fourze had 2011 written on him, so our heroes have a pretty good idea about what to do next.  Our heroes get worried as a man comes in to see what the commotion is all about but our heroes are fine, the man marks out big time when he sees that Sougo and Geiz are actual kamen riders.  The man gets excited and gives sougo a new power for him to use, all while we see some more kamen rider fan-service in the form of references.

Our heroes must now go back to 2011 to stop the missing girls from being attacked by Evil Fourze, so Geiz and Sougo blast off to the year 2011.  Cutting back to 2011 we see that strangler from earlier on in the episode (I hope it is) and he is in his shack and sucking the life out of girls.  Strangler is getting upset, his powers are fading, so he needs to find more victims but when he leaves his shack, he witnesses a kamen rider battle going on.  Timejacker Schwartz warps in and gives the man all of Kamen Rider Fourze's powers.  Evil Fourze wastes no time and has already absorbed missing girl number one but before he can rest, Sougo and Geiz show up.

We go back forward into 2018 where Tsukuyomi is protecting the girl and guess who shows up? Yup, the brown hooded strangler but he is soon attacked from behind by a mysterious person.  Jumping back to 2011 we finally see Kamen Rider Zi-O use his fourze powers against Evil Fourze to finish him off.  The way that Zi-O finishes him off is quite awesome, Zi-O turns into a rocket, flies Evil Fourze to space, then throws him down back to Earth.  Yup, Kamen Rider Zi-O used Superman's Injustice 2 finisher on him.

Our heroes can't party just yet as another evil kamen rider has spawned in Evil Fourze's place and this new one is called Evil Kamen Rider Faiz.  Back in 2011 we see that the mysterious attacker is... Someone I do not know because I haven't seen the Kamen Rider series that this character is from...  And that's game! I should've seen this to be continued coming from a mile away as all of these stories have been told in two parts so far. 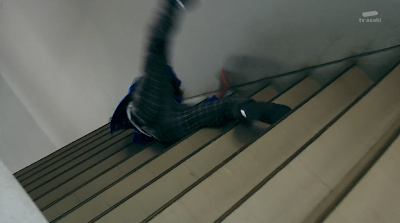 I want to start this review by addressing the biggest problem with this episode.  This may not be the best season for those who have not seen any of the 2000 - 2017 seasons (like me) but at least the first two story arcs had things in them that still made them safe for anyone to watch.  This was not one of those episodes and if you haven't seen Kamen Rider Fourze then you'll be left confused, it does expect you to watch that show to understand some of the main things that were going on.

Okay, this episode may not be fully unsafe for new viewers but that means you'll only be able to fully appreciate a little bit of this episode.  I know, I know, me reviewing this episode is like seeing a gaming journalist playing Cuphead and I'm sure you are all cringing at the wheel but I am not sorry.  Remember, this is a summary and review series done though the eyes of someone new to Kamen Rider and not someone who has watched it all of their life.

Other than this story being a problem for new viewers it wasn't a bad episode and I was hooked in and curious to see how it will turn out.  I wasn't expecting this episode to be on the darker side of things, you get a pretty mature situation and some brutal violence that you will not see in any English adaptations of these kinds of shows.  The dark edge did dull down a little after the attacks, no matter how the girl got attacked, they always made her look unscathed and made it hard to believe that she was strangled, beaten, and thrown off the roof of a building. They took a major thing and made it seem like that it was nothing.  I did find it interesting that a new timejacker was introduced, it thickens the plot and keeps me curious. 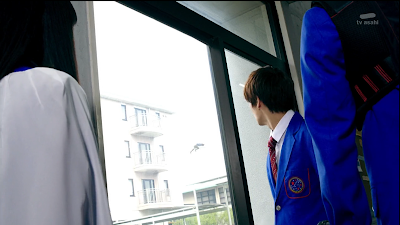 I was expecting this to end on a to be continued, the episode format is quite obvious now and that's these story arcs are told as two part series and I like it.  If these crossovers were squeezed into single episodes then the show would feel way too cramped and the pacing will be off.  Not much going on in the fighting but that's to be expected as this is only part one, so I'll be expecting most of the action to be in the second part.  I did like what we got though, it was fun, exciting, and interesting and I like the variety in the moves.  The action was also incredibly explosive but that's what you get when the bad guy is rocket themed.  The effects and CG for this episode looked very awkward, like using AR apps with your phone's camera, I didn't like it.  Does this episode make me want to watch Kamen Rider Fourze? Not really.  I'll probably watch it in the future but it won't be because of this episode.

Overall, a interesting and entertaining episode to say the least and I am looking forward to seeing how this arc concludes.  Fans of Kamen Rider Fourze will enjoy this episode more, especially with its references to the show.  Despite my problems with this episode I'm still giving it a very solid 7 out of 10.  That's it for this late article on Kamen Rider Zi-O, see you next time.  Kaiser Sensei out!
Posted by Retrokaiser at 12:37 AM