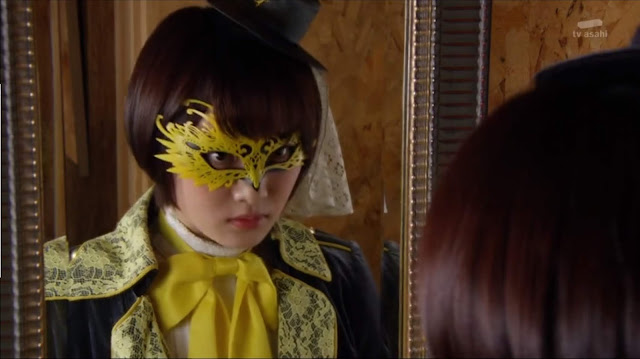 Time to take a look at the 7th episode of this season titled Always Saved. So far, most episodes have been really good. This one previewed that some rangers will get eaten and that Sakuya and Umika will go on a date! How could this happen? Will this be a tale of the cop and thief who fell in love? Also know as defiantly not Sly Cooper. Click "read more" so we can find out. (On a side note, remember no translation is perfect.)

The episode begins with a busy day in the Lupinranger's restaurant, even the Patrangers are there as customers again. Talk is going on all over the place, including a case of disappearing people in a steak house to which Sakuya boldly announces "OH! THAT IS WHERE I WAS GOING TO ASK UMIKA OUT ON A DATE TO." Guy has swag. Am I right? And, with no shame at all, he approaches and asks her out immediately after to which she is clearly not interested but doesn't know how to say "no". The other two Patrangers drag him out while apologizing but not before he forces Umika to take his phone number. Taking notes single men? Don't! 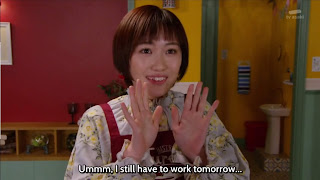 While leaving, Tsukasa and Keiichiro confront Sakuya about that display, also asking if he is serious. To which he replies that maybe he just likes to hang out with cute girls. lovable doofus to a bit of a scumbag in one sentence. Cutting back to the restaurant, Umika is upset with the others for not helping her but Kairi says she should cozy up to him to try and get information out of them. Everyone is a scumbag today it seems. She throws out the number and shutters with disgust when Kogure shows up with their next target. 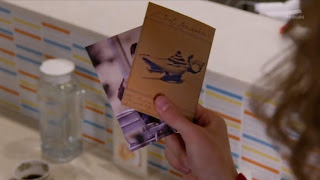 Barely over 2 minutes into this episode and already there is a lot to take in. 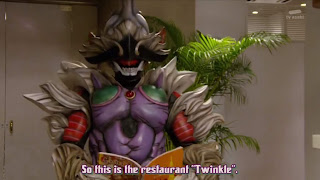 Before cutting to the theme song, we are shown this episodes monster of the week. This adorable creature who is after a delicious meal, but doesn't yet reveal exactly what he eats, could be people. Looks like gluttony will be the deadly sin of this episode.

The Lupinrangers arrive on the scene first, morph up, and begin the first battle. I love that this season gets this going early on in episodes. They fight, trashing the restaurant they are in, of course the thief sentai won't care about collateral damage, and the Lupinrangers seem to be on the defensive. This Ganglers treasure has the power to "expand spaces" including his internal organs or basically, eat people in a bottomless stomach. Which, sadly becomes the fate of Lupin Blue. 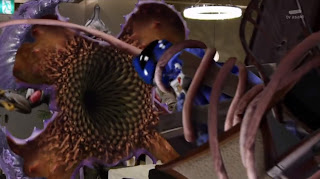 Lupin Yellow is targeted next but Lupin Red pushes her out of the way and gets eaten himself. Naturally, Umika is pretty upset about this but it also seems to trigger a painful memory of hers. 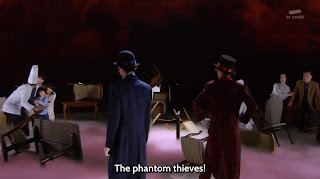 Tooma and Kairi find themselves inside the stomach of the Gangler (Merugu) along with all the other people he has eaten. Things are looking grim for them as there doesn't seem to be anyway out and attacking the insides only result in fog stomach acid being sprayed at them. Earlier, the main villains said that this Gangler likes to endlessly binge eat the locals of other worlds he had conquered without ever getting full. Talk about some dark backstory because this sounds like a horrible way to die.

Umika returns to their restaurant devastated about what happened and claiming she is always the one to get rescued. Looks like the episode title is about to be explained. Now, we get a flashback revealing more about our Lupin Yellow Umika. It reveals a childhood friend Shiho-chan who used to stand up for her as kids and eventually grew up to take the fatal blow for her the same way Kairi did in this episode. One can only imagine how horrible it must have felt to re-live that experience. 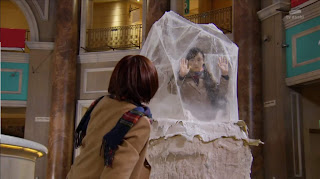 As a quick reminder, reviving their murdered loved ones is the goal of the Lupinrangers as it was promised to them if they successfully steal back all of the Lupin Collection.

Umika's confidence is crushed, however all hope is not lost. Kogure reappears and encourages her not to give up hope, also revealing that if she can steal his collection item, stripping his power, that it could save Tooma and Kairi. Pretty emotional scene overall. Has anyone seen the Patrangers though?

By following his pattern, Umika is able to predict where the Gangler will strike next. However, she is worried about taking him on alone and comes up with the idea to use Sakuya (fishing his number out of the trash). All the while, the others are still clinging to life inside the Gangler's stomach. 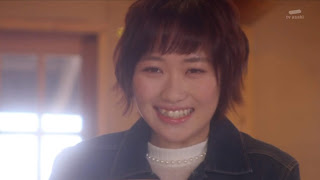 Finally time for the date they've been teasing and Umika really went all out for it. Wow! Sadly for her, this date is as awkward and uncomfortable as she predicted. However, she was right and the Gangler did arrive as planned to which Sakuya quickly morphs into PatRan Nigou and tries to hold him off. Give the guy credit, at least he isn't selfish.

The other two Patrangers join in the fight and the three of them are actually winning. In the middle of the scrap, Umika (having changed into her phantom thief outfit) literally swings in and steals the Ganglers collection item all unmorphed. This causes him to throw up all the people he had eaten from the restaurants. Feels like this monster just conveniently got weaker. 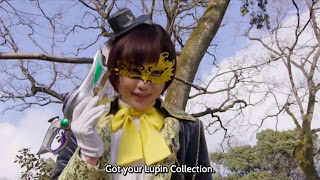 Nothing left to do but wrap it up. The Lupinrangers morph up, deliver the final blow and things play out almost exactly the same as they always do. Goche shows up, makes defeated monster grow giant, then Goodstriker shows up out of nowhere again. One funny line though, he goes to the Lupinrangers but they just brush him off saying "we're tired and done for today. Go to them." So, the Patrangers get the giant battle this time. This is again playing into my theory that the team an episode wasn't about gets the final fight for the sake balance. Once again, the giant battle is very short and pretty one sided. PatKaiser does get a new weapon though, a yo-yo. They quickly win the battle earning another Mission Complete. 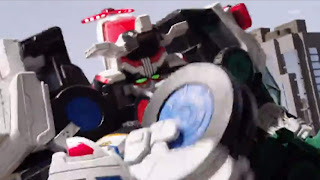 The episode ends back at the Lupinrangers restaurant with an uncomfortable reunion for Umika with Sakuya. He apologizes for the way things went down, trying to be nice. Or trying to stay on her good side. She still has no interest but tries to be polite and apologizes to him for being in that situation. This causes Sakuya to LITERALLY GLOW and develop and even bigger crush on her. Poor Umika. 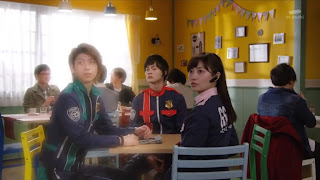 But, before this episode can end on a corny note, Tsukasa actually recognizes that the three from this restaurant look just like the Phantom Thieves. Took you long enough. Those masquerade masks are super confusing I know. Looks like next time, things will get serious.

This was another great episode. It gave some good back story for Umika and showed her to be a valued member of the team. The Patrangers don't get much screen time but since the last 2 were about them I will let it slide. Generally, the plot about a lost best friend and a quest to prove oneself is nothing special, but it was done very well. The acting was also very good, even though it got really silly at points, especially with Sakuya. If I had to nitpick anything it would be the Gangler. It's strength was very inconsistent and I don't get why it never tried to eat the Patrangers like it did the Lupinrangers. Also, once again the giant battle was pretty rushed. But, those really are just nitpicks. So, while this episode isn't groundbreaking, there isn't anything seriously wrong with it and it served the purpose of developing Umika's character. 4/5
Posted by Cendoo at 12:00 PM