I like a good card game, Yu-Gi-Oh... Okay, that's about it.  I find it difficult to get into most card games but if I play a good one then I'll play it forever.  You know what helps me get into card games?.. The video game versions of them!  They are the best way to learn the game, plus you don't (normally) need to waste a ton of money on starter decks and booster packs on them...  This video game route also made me realize how bad the DragonBall Z card game was back in the day...  But still, video game versions of card games can be the best gateway drug to physical card games.  Today's game isn't a physical card game, it's a digital one and it's free to play!  This is Slime CCG for the PC.  Will this Free to Play game be worth playing?  (Click on "Read More" to read the full review). 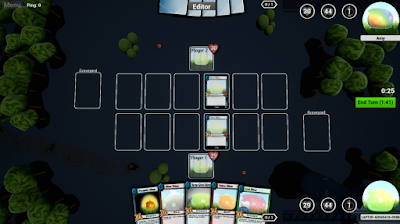 No story in this one, not like that matters with this game anyway.  Moving on! 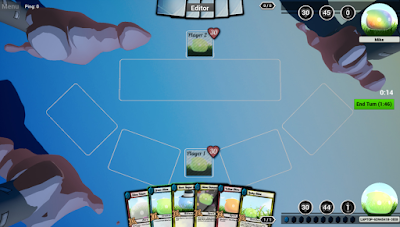 Playing a card game for the first time is the most stressful part of any card game, you have no idea how to play and you've gotta learn the rules, it's the make or break part of a game.  Thankfully, this game has an incredibly basic system that anyone can learn on their first try.  How do you play?  Well, first you get a handful of cards and all of the cards are slime themed, they also have a number on them.  You can place a card on the field by spending diamonds, you start off with one diamond at the start of the game and you gain +1 diamonds with each turn.  Now for the slimes themselves, you do get different ones that do different things, so make sure to read the effects of the cards but the main ones that you want are the ones that can attack.  The slimes can attack the slimes on your opponents side of the field but certain slime cards can attack the player directly and once a player is out of HP, it's game over.

Yeah, ultra simple to get into but I did not find it enjoyable to play as the balancing is all over the place as a lot of the cards are overpowered, making the games end as soon as they begin.  I wouldn't have a problem with this if they had the strong cards at high ranks but you can summon cards that have ultra high attack right from the get go.  How strong are they? Well, the players get 30HP per game and you can summon level one ranked cards with five attack points that can also attack the player directly, despite the other player having slimes on the field.  The slimes also have HP of their own, so it can take a few attacks to get rid of the overpowered ones but it'll be too late by the time you get rid of it.  What's worse is by the time you can summon the mid-level slimes (that's around the four diamond mark) you can summon a card that not only has five attack points but it can clone itself when attacked, making for some broken card battles.  You can also add these cards to your deck right as you start up the game, so yeah, the card balancing is out the f*****g window in this one.

One interesting thing about this game is that there are different styles of play-fields and they really don't do anything to change the game, all it does is just changes how many slimes can be placed on the field.  This game does require you to be online but you don't need someone to be online to start a game, an AI will be your opponent if no-one else is on.  It's not like that finding another human player to play this with will make the game any better. 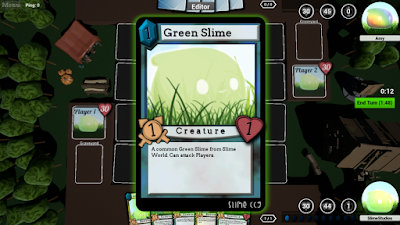 The designs of the cards are very cute and I really love the slime theme.  Would I like to see the slimes as actual printed cards though?  Not really!  While the style works for this game, they'll look generic as physical cards.  The backgrounds in this game are very generic and looks like that they were taken from a basic card game asset for some basic game making software. 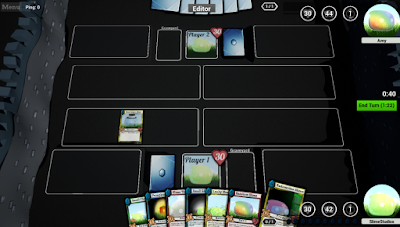 The soundtrack is laughably bad as it's just some generic tune and once the tune ends, the game will be silent, making for some real lonely atmosphere. 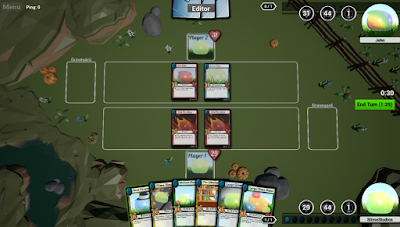 Overall, Slime CCG is simple to play but too broken to enjoy.  To be fair, this game is meant to be in early stages but from what I've seen and read, Slime CCG has already been left dead in a ditch, so don't expect any updates to this game.  Slime CCG gets a 4 out of 10.
Posted by Retrokaiser at 2:00 AM