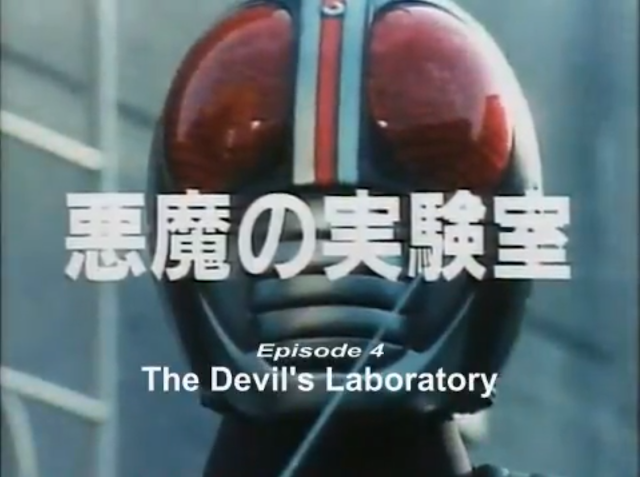 Previously in this series: Kaiser Sensei has found himself enjoying the show again (how lovely).  Now Kaiser Sensei has come across a new traffic cone in his way... And this one has a cool name.  Yes, we are up to the fourth episode of the series and this one is titled: The Devil's Laboratory.  What happens in this episode? Well... Click on "Read More" to read the full summary and review of the show.  Yup, I know, I make this sound like a hack click bait title... But this article will take up too much room on the main page if I posted this in full there... Plus it won't count the views if I posted the whole thing on the main page! (Click on "Read More" to read the full thing). 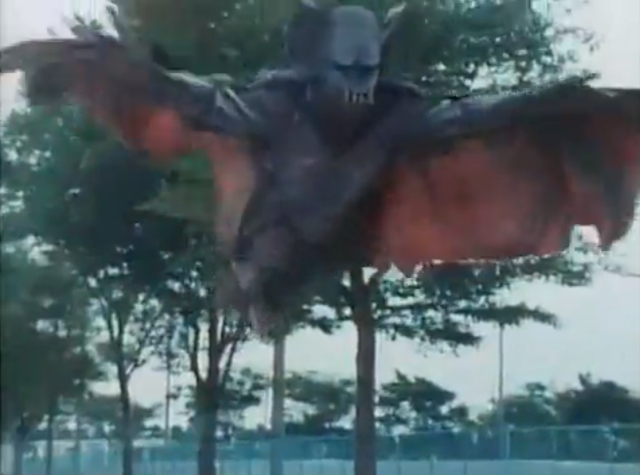 Episode Four opens up with Kotato getting attacked by a bat out of hell (no, not Meatloaf) but Koatro transforms into Kamen Rider Black and gives the bat a big ol' Kamen Chop.  The Bat Man (not that Batman) flees, an easy victory for Kamen Rider.  Next we cut to the lair of the Golgum, which one of them is incredibly frustrated about how they keep on getting defeated by Kotaro.  The other Golgum members try to calm him down and try to come up with a new plan, which they acknowledge that Kotaro is near impossible to capture.

The Golgum's new plan isn't to attack but to observe and learn about what his weakness could be.  The way they try to study Kotaro is by not studying him at all and focus on learning about teenaged boys instead... Kinda creepy.  Now it cuts to a high school where a student is running from a Golgum member to which I asked myself, "How the bloody hell did he know that was a member of Golgum?".  My question was quickly answered as the teenager in pursuit is an athletic runner, which the Golgum were using experimental steroids on.  The Golgum member chases him down and tries to convince the boy to take more, so he can be the fastest man alive.  The teenager refuses and gets attacked by a creepy Giant Flea to which the teenager gets away and commits suicide by jumping off of the high section of the stadium...  Who'd knew that he'd make such a spectacular diver *ba dum tish*. 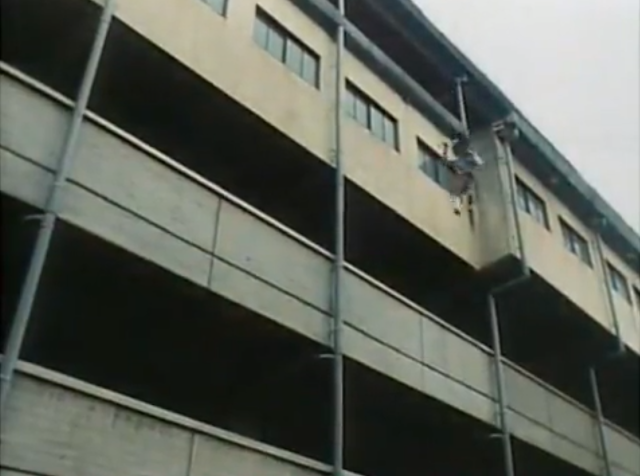 Kotaro's Friend doesn't seem to mind the surgery, until the Golgum Member takes off his hand and eyeball and replaces them with robot parts in a scene that looks like a bad-ass commercial for a NES accessory... I love the Power Glove.. Actually, this transformation is pretty useless as he uses the Giant Flea to inject him with a calming liquid... That's a first for this show, anesthetic.  The surgery then ends with the NES commercial looking dude injecting Kotaro's Friend with the steroid that'll make him fearless. 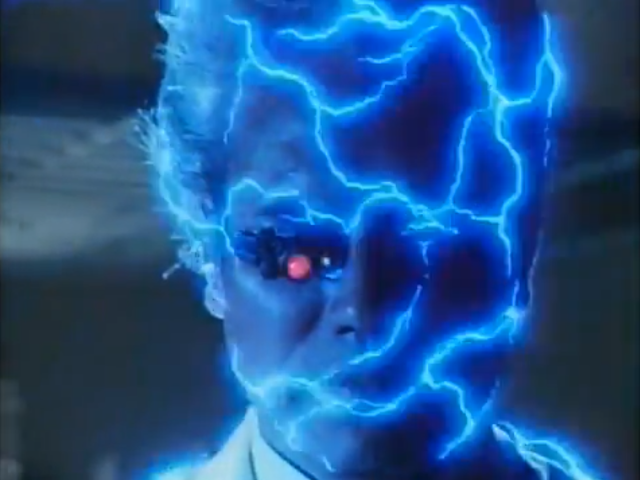 We then cut back to Kotaro and his friends and family watching the Motorbike Rider doing real well.  We are then given some good back story with Kotaro telling his sister that his friend was the one that taught him how to ride a motorbike.  I love this as it makes Kotaro extra special knowing that his skills came from being taught by someone special to him, instead of having instant skill.  Everyone but Kotaro is happy with the Motorbike Rider's new found confidence and skill as Kotaro notices that his friend is acting like an all new person all of the sudden and suspects Golgum foul play.  Kotaro's Friend is also starting to get addicted to the golgum drug but he is noticing some weird side-effects that is messing up his skill.

Later that night, Kotaru's Friend wakes up in shock as now he suddenly looks like Wolverine from the X-Men, he has pointy hair and killer sideburns.  Kotaro just also happens to be around the seeing his friend go crazy.  Kotaro's Friend manages to run to the lab where the Golgum have experimented on him and goes from looking like Wolverine, into Teen Wolf... Yup, another b****y werewolf episode. 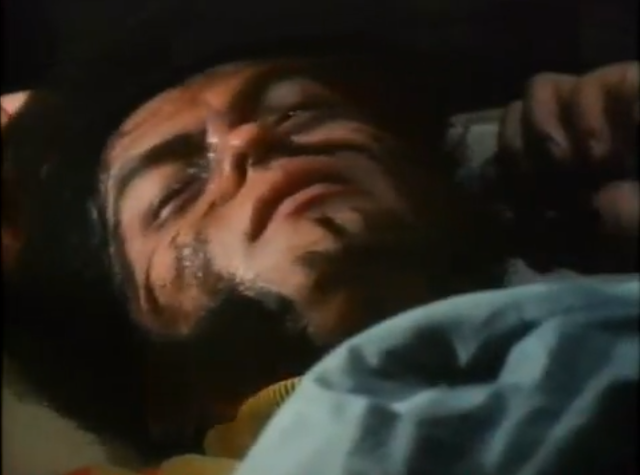 Hayami the Werewolf (now we know his f*****g name is) escapes from the lab and tries to commit suicide by diving off a cliff but Kotaro manages to stop him and then... BAM! Kotaro gets attacked by the Giant Flea.  The Giant Flea beats up Kotaro for a bit until he transforms into Kamen Rider and destroys the monster by kicking him off the cliff.  Hayami is also suddenly cured of his werewolf disease.

We now cut back to the Golgum's lair to which they ask themselves how did he manage to turn his friend back to normal?.. I'm also asking myself that very same question.  The Golgum member that was in charge of this operation also gets punished hard (Let's get the punish starting! PUNISH HARD!).  Lastly, we cut back to Kotaro and friends having a good time and that's the end of the episode. 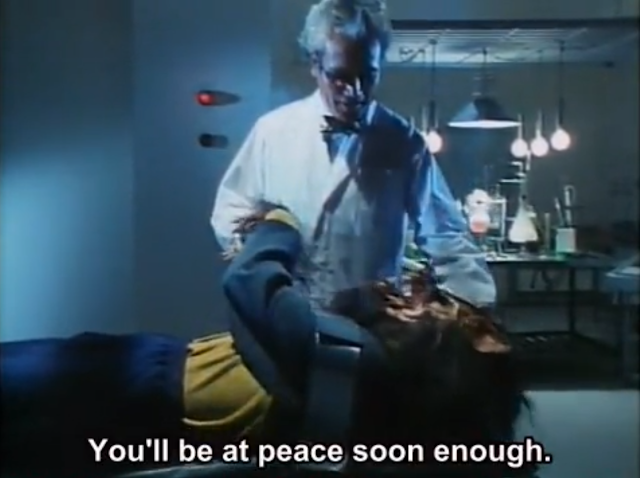 What did I think about this one? It wasn't bad, actually it's a really good episode with a tightly written story that uses action and dialogue at an effective and balanced pace.  I liked how this episode even made the one off characters feel special and not useless, giving me an emotional connection to them.  The bad guys were even used in a very effective manner to where they did feel special and also very threatening.

I also liked the dark element in this episode as it gave this episode a certain edge that made for some refreshing viewing.  Granted, the darkness was also a bit cartoony at the same time but not enough to where it ruined the mood.  I did find the ending to be a bit disappointing though as I didn't like how everything was suddenly better, this show normally goes for a much less Disney fairy tale approach to outcomes of battles. 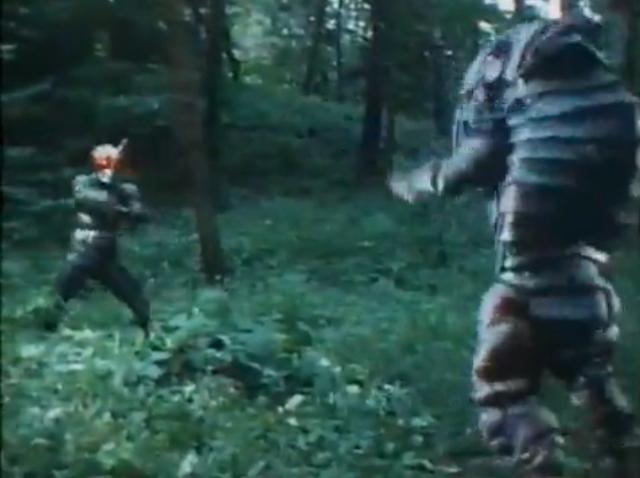 The action in this episode was also really good and despite Kamen Rider and the Giant Flea having two different fighting styles, normally wouldn't be entertaining, it worked very well.  Some of the action got very brutal as well as seeing the Giant Flea get kicked off the cliff, seeing him hit the ground with a large crunch sound effect shocked me a little as it was quite violent.  Sadly, this part also did get ruined for me as the Giant Flea got up afterwards and exploded adding to that Micky Mouse no-sell stuff.

The costumes and effects are cheesy but really awesome at the same time as the practical style gave it a much more natural feel and made the monsters feel very alive.  Again, the effects for some of Kamen Riders attacks were super flashy to where it did hurt my eyes a little and I doubt that this effect will be gone anytime soon.  So if you suffer from Epilepsy, you'll have to skip this show. 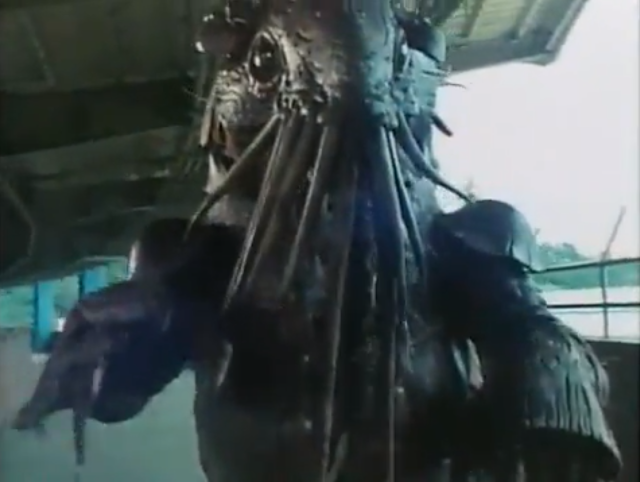 Overall, this is a great episode of Kamen Rider Black and is one of this series best.  I'm giving this episode a 8 out of 10.  I sure hope that this series has more good episodes like this... Probably not the next episode though, I have a feeling that one won't be that great.
Posted by Retrokaiser at 8:16 AM