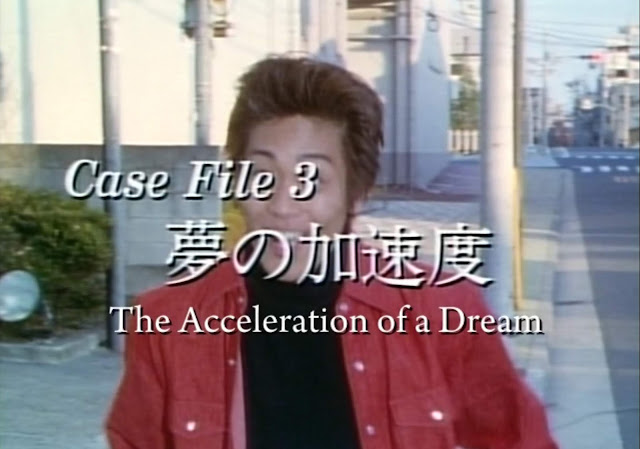 Alright, we are back again with a third episode. Things have finally been established so now we can take a look at how this series is going to play out properly. It is hard to know what to expect at this point since all we've had so far are introductions. But, lets just give this episode a go and see what it brings us. Also, two things of note, I'm gonna color code the Timeranger's names to try and make it easier to follow and start calling Asami by his first name Tatsuya as they do in the show.

The episode begins simply enough with a moving truck while everyone gets settled into their new home for now. Sion has already got a nice work station set up while some of the others offer more exposition like establishing Tatsuya as the son of a rich man. I can see that time force kept some of the characteristics of its origins. 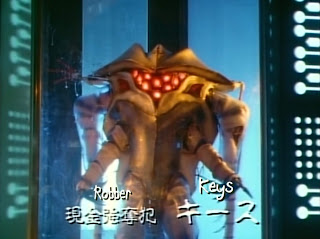 Moving right along, no time is wasted in introducing this weeks monster. Keys, a robber who was sentenced to 50 years frozen for stealing 30 billion in cash. I question how much that really will be given inflation to the year 3000. Well, this bad guys has some personality and a lot of built up rag. He explains that while frozen you cannot move your body but your mind is still half working. I will be honest, that sounds extremely painful to live through, almost like a fate worse than being blown up. Even without the prejudiced angle that power rangers was using, I am almost feeling sorry for these criminals.

Cutting back to the Timerangers home, they are now talking about work to do in order to pay rent. Tatsuya gives suggestions such as Sion being a repair man since he is good at building, Yuri a detective, since she pretty much already is, and that he would open a karate dojo. Sion then points out that Domon could also do that since he is a former professional MMA grappler. (Take note this season came out before UFC was a thing so excuse the odd title.) Now we get to learn a little backstory for Timeyellow, he ditched an important match and got banned because he was pursuing a girl. Pretty short but I suppose this was meant to establish him as a womanizer. However, Ayase seems to cause the biggest scene. He makes fun of Domon then leaves telling the others that he will do anything to as a timeranger to catch the Dornero and his gang but that the others can't but into his personal life. Makes it easy to see this episode is about him, all we get for now though is a drawing of a car he doodled and threw away.

Bit odd of pacing here. Normally all these character moments are done before the monster of the week is appeared, but here it is kinda ignored. But, for now I'll give it the benefit of the doubt.

Finally, the bad guys plans begin. From a name like Keys I thought this prisoner would be a lockpick but he is actually a hacker. He combines with computers and extracts top-secret security data. He uses this ability to learn of a secure route that was being used to transport a lot of money and steals it. 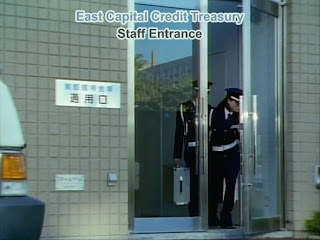 The Timerangers, knowing he'll try that again, disguise themselves as cops and attempt to set up a trap. But, using the same hacking ability, Keys learns of this plan and simply attacks the car that Tatsuya and Ayase are driving. During the attack, Keys uses with a nearby car as well, kinda like Upgrade from Ben 10. Well, the car chase ends with Key's car being blown up (sucks for whoever's car that was) and Ayase deciding to take over driving revealing that he was supposed to be a pro racer. I guess it only took a monster attack for him to finally open up; is what I'd like to say but there really wasn't any build up to that aside from that one scene from earlier.

They build on that a little more, saying he didn't tell him because he didn't want to grasp a steering wheel anymore having given up on the dream of becoming a pro racer. Defiantly a calmer side to Ayase and it is nice to see Tatsuya caring about his comrades. Well, the case isn't over yet, this time Keys is a truck. 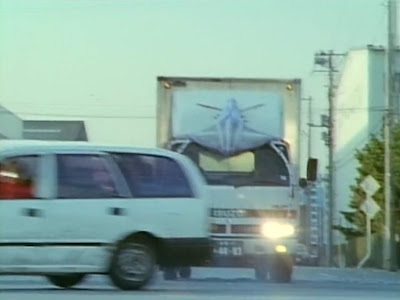 They tried so hard to hide the drivers but if you pause at the right time you can see someone dressed in black driving the truck. Not gonna fault a show from 2000 for work-around effects but I thought it was funny to point out.

They lose him for a few moments and continue their conversation. Ayase says that Tatsuya's speech about changing tomorrow really hit him. That I'm gonna have to agree on, I still stand by that it was one of the best red ranger speeches to date. Well, this gets cut short again as the truck reappears, talk about trying to hold the audiences attention.

With the car gone now, Ayase starts going on the offensive. A very odd moment happens where he is about to henshin but Tatsuya stops him saying that it is too early and I'm not sure if that had meaning or if it was a 4th wall joke since the episode is only half over at this point. Well, Ayase charges, takes damage and says only he needs to die instead of both but Tatsuya hits him and gives the old never give up speech. The truck then charges them only to be blown up by the other 3 Timerangers who showed up out of nowhere. 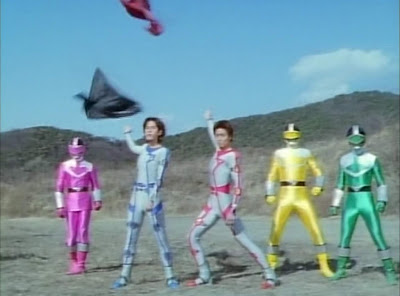 Well, turns out it was all part of the plan, the car they were driving was full of rocks while the real money had safely been delivered. Tatsuya says now they can morph, still not sure if that is a 4th wall joke. Also, still not digging these pre-henshion uniforms, I'm starting to wonder if they are thermal underwear from the year 3000. Why'd they even have a red one in Tatsuya's size?

At last, we are ready for the hero battle. Not much to say about it really. It goes pretty one sided against the foot soldiers, Keys gets in a few hits but is ultimately overwhelmed, standard stuff. Of course TimeRed and TimeBlue get to stand out the most in this fight since this episode was mainly about them. The one thing of note is getting the first glance at their "combine your weapons" bit. 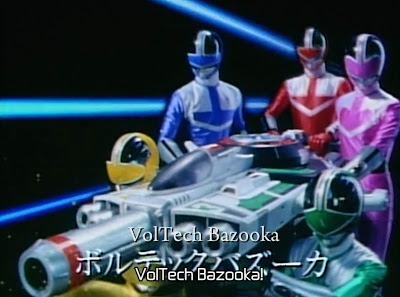 Put a bunch of big guns together to make a bigger one, monster almost goes boom but then makes himself a giant. The giant robot fight is also pretty short, they start in Alpha (blue), get a few shots in, almost get possessed like the cars, switch to Beta (red) and finish Keys off with the sword finisher. One more criminal re frozen.

The episode ends with Tatsuya revealing their new company he calls "Tomorrows Research" where everyone will do their previously stated jobs including Ayase's driving services. Everything ends on a happy note while they wrestle around with the new uniforms.

This episode was just okay. There were some strong character developing moments in it for Ayase and I like that they are establishing how they'll make ends meat. However, it was kinda hard to follow sometimes and the main villains only got one scene. I think I've figured out what this seasons biggest weakness is, too much talking. The ranger battles are short, not bad, but lacking. That statement Tatsuya made half way through about it being too early to morph, I'm gonna have to disagree, mixing in some ranger moments with all the dialoge would have helped draw attention more than an on off car chase. But, for what this episode wanted to establish, being the VolTech Bazooka and Tomorrow Research, it did it's job just fine. 3/5
Posted by Cendoo at 3:00 PM