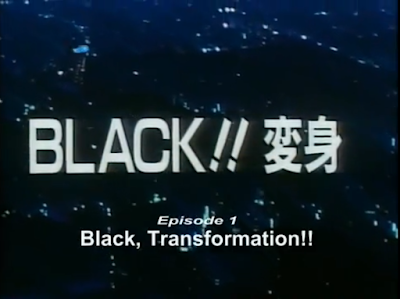 Don't go ignoring me because I lack experience with the series as I guarantee that this series is as easy to review as any other ordinary action packed superhero show.  This also means that this is a series of summaries/reviews done by someone seeing the show though fresh eyes... Which is the best way to review a show… Sometimes.  So if any of my views offend anyone that are way more experienced with this series than I... I'll understand your pain and cringing but I won't feel sorry for what I have to say. That's enough of this padded out introduction that's a lot better than the introduction that I had originally written for this review series!  Now on to the review for the first episode of Kamen Rider Black titled, BLACK Transformation!!! (Click on "Read More" to read the full article. Don't want to read it? Click anyway and give me a petty view). 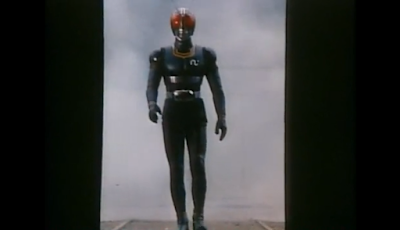 Here's a little exclusive one-off bonus for this first review, which has all to do with the show's intro.  The intro itself is pretty good with it's long shots of the hero walking to his bike, followed by shots of him riding his bike.  This gives a good sense of mystery to the character but also gives you an idea on what to expect.  One thing this intro does lack is of shots of Kamen Rider fighting monsters.

The theme song is okay and I did enjoy the lyrics and the singing but the music itself was a bit too dated, it also sounded like watered down disco music.  Overall, intro is enjoyable but it's not good enough to warrant me watching it every episode. *End Bonus* 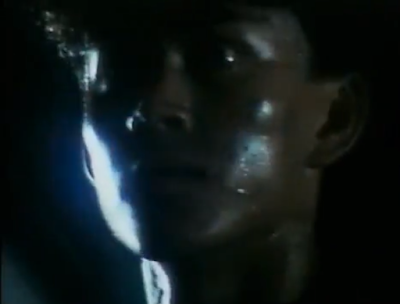 The way that this series opens up isn't exactly what I expected, especially since I grew up with the Mighty Morphin Power Rangers as the way this series starts is incredibly dark.  This show opens up with a teenaged boy named Kotaro, whom is running away from some white hooded creatures (NO! I'm not talking about Trump supporters).  These White Hooded Creatures are from an evil group called Golgum and they are also incredibly scary looking.  They are also incredibly ruthless as they are willing to destroy anything just get to him.  When the Golgum trap Kotaro, they flat out mess him up by not only breaking his back but they also launch him to a neon sign and electrocute the h**l out of him. 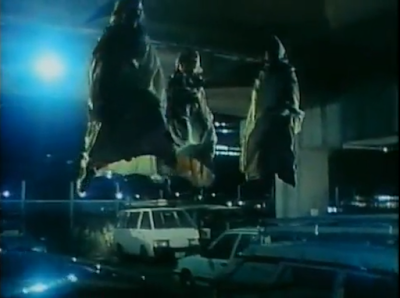 Shorty after we find out that this brutal attack doesn't kill him as we find out that he is no ordinary human.  Kotaro and his brother, Nobuhiko were taken and experimented on by the Golgum, so that they can turn them into their Dark Cyborg Kings.  Sadly, it was too late for Nobuhiko but Kotaro was saved thanks to his Father interrupting Kotaro's wide-awake surgery.  Now we cut back to Kotaro getting up and going back on the run from the Golgum.  The game of cat and mouse doesn't last long as they catch him, yet again, brutally attack him, yet again, and send him flying though a wall, yet again... Wait! No! That one is new.  It is in this moment that Kotaro's inhuman powers kicks in and he emerges out of the building as Kamen Rider. 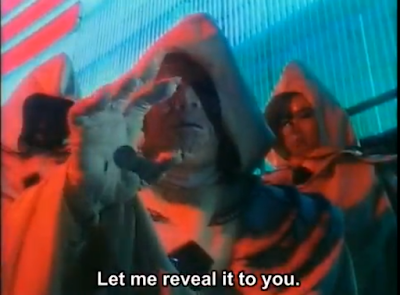 Kamen Rider manages to fight off the Golgum and escapes. When he gets home he finds a note from his father telling him that he isn't safe and that he has answers to why he is being chased.   Oh boy, Kotaro sure gets some life changing questions answered.  Firstly, Kotaro finds out that his Father is not really his biological father but is his adopted father and that his biological parents died when he was very young. 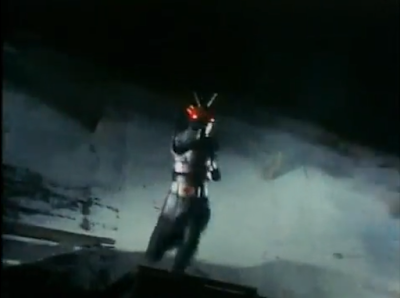 Kotaro's Father also reveals that he is a member of the Golgum and has also sold off Kotaro and Nobuhiko to the leader of Golgum, The Devil... The Devil?!?  That's right! The Devil!  Well, that's what they are calling him right now but we'll see if he really is or not as it is still way to early in the story to tell.  If it doesn't turn out that the leader is the Devil then, sweet.  If it does turn out that the leader is the Devil for real then, still sweet.  But anyway, I'm getting too distracted.

After all the dark secrets are unleashed, Kotaro and his Father are attacked by creepy looking Spider-Demons that look like something ripped right out of your deepest, darkest nightmares.  You remember the Ooze Monsters from The Mighty Morphin Power Rangers Movie?  Well, take that and mix them in with the Demons from Tales From the Crypt: Demon Knight...  Then give them big old spider butts.  Yeah, they are Power F*****g crazy looking!  The Spider-Demons then take off with Kotaro's Father and climb a big Tower.  Kotaro turns into Kamen Rider and tries to stop them but they play dirty and drop his Father from high up the Tower.  Kotaro then tries to catch him but fails and doesn't fully catch him.  After witnessing his Father die in his arms, Kotaro then drives off into the distance like the American Bad-A** version of The Undertaker. 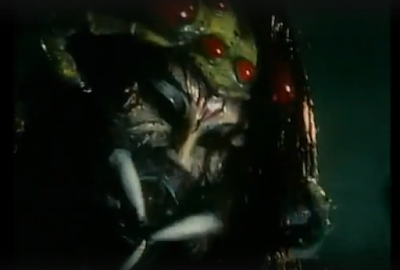 Yup, that's all that happens in this dark and exciting tale of Kamen Rider Black.  The story in this episode is simple, yet powerful.  There's also not that much dialogue spoken in this episode, the acting is mainly told though the action and emotions of the characters and it was brilliantly done.  Their emotions created a sense of atmosphere that really dragged Me into the show.  It is also enthralling and I couldn't take my eyes off of what I was seeing.  When the characters do talk in this episode, it was something normally important and added on to everything, making a very powerful first impression.

As you can tell by reading, action in this show is a lot more daring than a lot of these superhero shows that you grew up with.  Yes, they aren't afraid to add death and danger into this show and not only was it super entertaining, it was also well done and also made me question if Kotaro was going to Survive.  Yes, the writing and action made me forget about the stereotype of the hero always winning in the end.  I also liked that even if the hero won the battle then it still wasn't without damage, really humanizing these inhumanly powered humans.  I'm also glad that I watched this as an adult as if I saw this as a kid then it'd scar me for life.  This show IS dark, it IS violent, and I'd even dare to say that it is even darker than Guyver (a series similar to Kamen Rider). 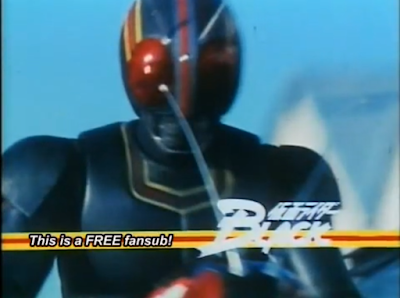 Another bonus one-off exclusive and since this is the middle of the review, that's got to mean that it's time to talk about the eye-catch (you know, those things that appear before and after commercial breaks).  Nothing much to talk about here, it is just a Kamen Rider logo that appears on the screen.  What I do like about it is that it transitions on screen as if a motorbike was leaving a trail/skid mark across the road.  Nothing much else to talk about here but check out the screens if my words aren't doing the description justice. *End Bonus*


The quality of the filming and effects are quite remarkable for a television show as it looks like it could be a movie.  Sure, maybe not one of the ultra big films but it does look as good (or if not better) than the Masters of the Universe movie from around the same time.  The effects look really good and convincing for the most part and this really adds to the dark and violent tone of the show.  With that said, yeah, some of the effects look really dated with the big examples being that some shots of the Golgum flying around looked off and don't match well with the backgrounds. 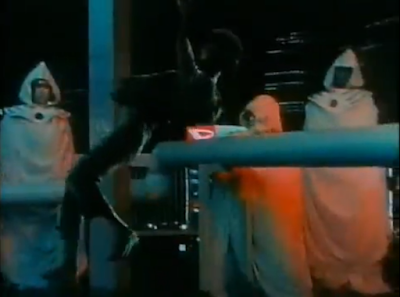 The worst effect is in the most violent scene of this episode... Yup, the scene where Kotaro gets his back messed up.  The thing that looks off is the moment when he hits the metal bar as the green screen effect doesn't look right, he doesn't look like that he has made impact with the metal bar.  The electrocution that happened after is very hard to watch, the effect was done well.

I really love the sets that were used in this episode, there's a lot of dark alleys and creepy abandoned places, it knows what it was aiming for and it did it in a spectacular fashion.  All of the loneliness of Kotaro helped to bring me (and a lot of other things in this episode) into the story.  If you've seen the movie, The Terminator then it is that exact same feeling of loneliness and darkness, really intense stuff.

The costumes are really well designed to the point where I forget that I'm watching people fight in silly costumes...  Actually, they are far from being silly, they looked great!  I love how the bad guys actually appear threatening to match with their menacing attitudes.  I also love Kamen Rider's costume design, there's so much bad-a** charm to be found there. 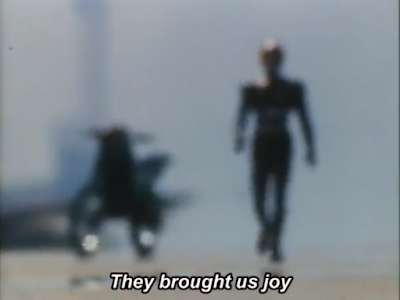 Final bonus one-off exclusive for this review series and if you guessed that I, Kaiser Sensei was going to talk about the closing credits then you'd be spot on.  I hope you like long shots of Kamen Rider as that's what you get for the closing credits.  Okay, it's just one long shot and an incredibly blurry one at that, all while the credits roll.  Yeah, it's nothing special but it does a good job at giving you some satisfaction in knowing that you've watched an episode of Kamen Rider Black.  The music also does a good job at adding to this satisfactory atmosphere with it's slow and dark vibes, doing a brilliant job at hooking me in for more... Well that and the contents of this episode. *End of Bonus*

Overall, really strong opening episode that ticks all the right boxes of what a good superhero show should be.  This episode has not only gotten me hooked into the series but into the franchise as well.  I loved it and I am giving this episode a 9 out of 10... Yeah, why didn't I give it a full on 10/10?  Well, while great, it is still far from perfect but still incredibly good.  9/10
Posted by Retrokaiser at 7:54 AM