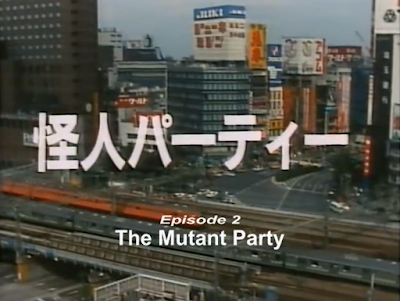 Last time on Kaiser Sensei's Kamen Rider Summary and Reviews we had our hero, Kaiser Sensei gush over about how much he loved the first episode.  Now, Kaiser Sensei decides to fully dive into the pool that is, Kamen Rider Black.  Will this show continue to flourish or will the tires of justice pop?  Find out in today's summary and review as I take a look at Kamen Rider Black Episode Two: The Mutant Party. (Click on "Read More" to read the full article... C'mon! You know you want to). 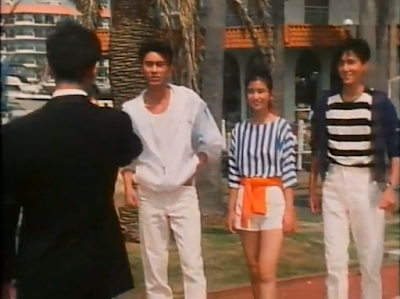 Episode Two opens up with Kotaro searching for clues about the whereabouts of his Step-Brother, Nobuhiko, while looking like an old school music video that you'd used to see on VH1 before they became uncool.  Kotaro also warns his surviving family that they are not safe but that's all the progression we get on that storyline as today's episode is a flashback episode... Yay!  What are we flashing back to? Why to none other than to Kotaro and Nobuhiko's 19th Birthday.

Their birthday party takes place on a beautifully designed boat with celebrities and local politicians as their guests.  Things are going well up until they start drinking as the birthday boys notice something weird going on with the politicians and Tsukikage (one of the celebrities).  Shortly after that it gets even weirder, they are attacked by a swarm of grasshoppers and a lot of the guests don't seem to give a s**t and just continuing on partying (PARTY HARD! PARTY HARD! PARTY HARD! PARTY HARD!).  Next we have a very familiar scene, Kotaro and Nobuhiko get kidnapped and put into surgery, followed by Kotaro going on the run.  Yup, we are already getting an extended clip show and it is only the second episode... Yay! 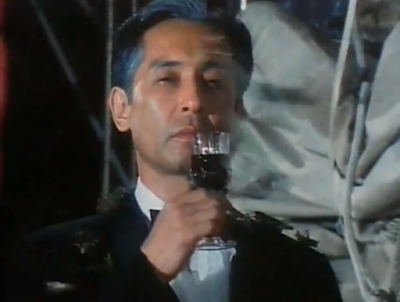 After the flashback (which only takes up half the episode) we see Kotaro taking his sister to a shop owned by a friend to prevent her from being attacked by the Golgum.  The friend welcomes them to the shop by scaring them while wearing a werewolf mask and then drives off to go on a holiday to the beach.  Kotaro doesn't like this situation as much as he would've as this means that his sister will be left alone but he doesn't have much of a choice for now.

Kotaro then leaves to go visit Tsukikage at her home to ask her some questions about what was going on during his birthday.  Kotaro has to break in and doesn't like what he finds as he finds her murdered corpse covered with flying insects.  Who or what would do such a terrible thing?  It doesn't take long for Kotaro to find out as he is quickly attacked by some kind of weird creature.  This weird creature turns out to be a werewolf and it doesn't waste time and it knocks Kotaro out the window... A window that's near the top of a really tall apartment building that is.  Kotaro manages to turn into Kamen Rider while falling and gets into a fight with the werewolf. 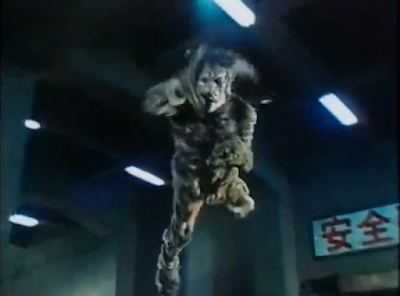 Yeah, can't say that I was overly impressed with the story in this episode as it mainly focused on flashbacks.  It felt like that they had way too much footage filmed for the first episode, where they tried to make an episode out of deleted scenes.  The flashback wasn't bad per se but it is way too early in the series to be pulling cheap time filling clip shows like this.  The parts with Tsukikage was also a bit of a waste, those scenes didn't seem to go anywhere!  I also use "seem" as in that it could be explained in a future episode...  Which would be good as it was making the mystery to be interesting, so I hope we do get answers in the future.

I did like the subtle hints as to who the Golgum actually are, okay, it makes it pretty d**n obvious as to who the members are but it does add a very interesting aura that leaves more questions than answers.  While I do have things I liked and dislike about the writing of this episode, what they did do 100% correctly was that it was incredibly entertaining and the time just flew right on by...  Even with the filler scenes. 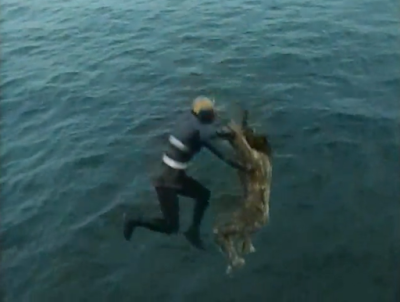 The jewel of this episode is the fight between Karmen Rider and the Werewolf, it is insane and must be seen with the human eyes.  They go all over the place and I really do mean that as they fight on a tall building and work their way up, down, and up again and it looked like an incredibly dangerous scene to film.  This fight is also on the cheesy side as the Werewolf costume looks real cheap, plus there's a scene where it transforms into a regular wolf and it looks bad as you can clearly see that it's a regular dog with a leopard print coat on.  This fight also uses a lot of reverse shots to where some shots are horridly obvious, while some are pretty well done but the cheese just helped to make it awesome... Oh and people with Epilepsy should avoid this as the Kamen Riders transformation and attack effects are so flashy that it will mess with your eyes.

Overall,  minus the crazy fight scene, Mutant Party is a pretty lazy second episode that can mostly be skipped.  Does this episode kill the series for me though?  H**l no!  It is way too early to quit the show at this point, there's so much I still need to know...  But if it keeps on pulling this clip show b******t then you won't be seeing me continuing on with this series.  I'm giving this episode a 5.5 out of 10.
Posted by Retrokaiser at 8:23 AM