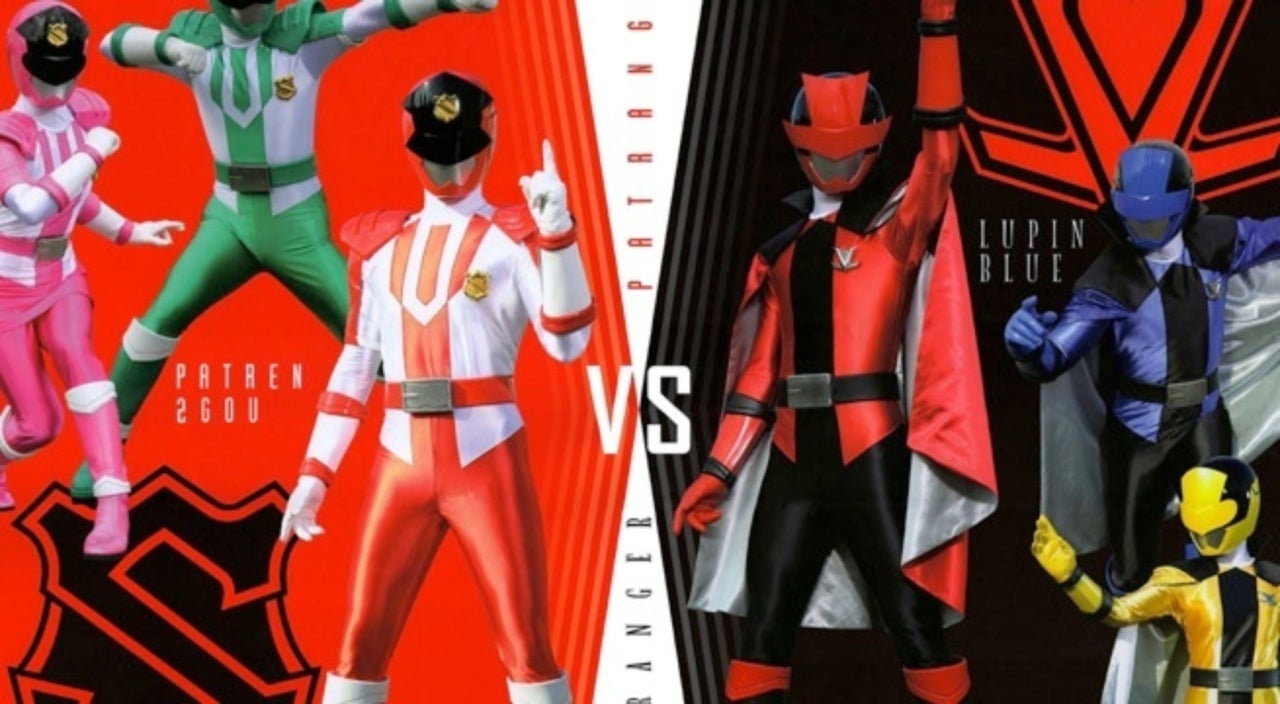 Wow, been awhile Since I talked about this season but it is about time we get back to it. The first 3 episodes were covered in video form but from now on these will be written articles just like my other Sentai coverage. On the last episode, Satoru developed a crush on Umika, the two simple minded ones of the two groups. Forbidden romance or slapstick comedy? Let's see if this episode touches on that.

The episode does not continue that scene but starts off in the Patranger's police car. Keiichiro is super worked up about 15 cases of people disappearing from locked rooms and immediately believes that a Ganglar is behind it despite there being no evidence. Tsukasa is able to calm him down though, revealing in a flashback that they have been working together since their days at the academy. Satoru asks Keiichiro what Tsukasa's weakness is, but he can't think of anything. 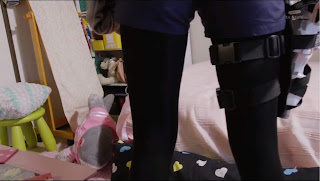 Well, they arrive at the crime scene to investigate. It was in a locked room with no signs of forced entry and everything looks normal, but the closet catches Tsukasa's attention. Personally, after seeing this my mind immediately thinks, Monster in the Closet. Well, Keiichiro concludes again that it must be the work of a Ganglar causing the parents of the missing girl to freak out and panic, but he promises they will rescue her. Then, get to intro.

Yeah, fun side note, this is the first season since Sun Vulcon (1981-1982) to have a scene before the intro/title. That was the 5th super sentai and this is the 42nd. Nothing really special about that but it is interesting to know they broke a 37 year streak.I think this helps since it gives them a free seguway.

Back to the Patrangers; the three of them are driving and looking over the facts about the victims until Tsukasa sees something causing a sudden stop. Turns out, she spotted a truck selling the same type of toy found in the girls closet. 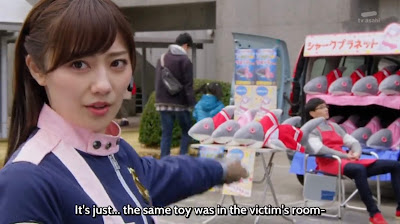 I was expecting the others to brush this off as coincidence and then later be proven wrong but they actually take it seriously and rush over to investigate. They show him a picture of the victim but he denies seeing her. However, that is quickly cut short when the Lupinrangers show up. Yup, Tsukasa was rights, a quick attack reveals this salesman as a Ganglar named Labrum. Well, that was uncovered quickly.

Well, the Lupinrangers attack with the Patrangers quickly morphing up and joining in. For the third time in a row we get a 3 way struggle battle so it is safe to say that will be the norm for this season. One thing I will give credit for is the new camera angles. Rather than just cutting around, the camera is rotating, showing off the atmosphere of the battles and making them more fun to watch. The fight itself is cut short with the reminder that only this Ganglar knows where the captured people are and it assures them that if he dies all of them will die too. Everyone stops attacking and he uses that opening to escape.

The Lupinrangers decide to leave but Tsukasa begs them to tell them about the Ganglar out of concern for the captured victims. Only Lupinyellow (Umika) stops and tells them all they know is that it's treasure allows him to disguise anything as anything, (explaining how he looked human earlier). 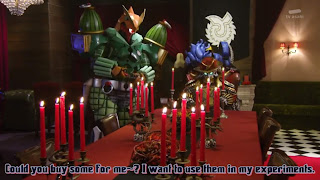 Things start getting serious. Back at the main villians base, Goche convinces the boss to buy some of the captured humans. Why? Because she wants to have some using them for experiments. No other details are given regarding exactly what she wants to do with them. That, just makes it sound all the more scary. Bravo writers, bravo.

Back at the Lupinranger's restaurant; Umika is getting a hard time about blabbing their intel. She apologizes but expresses with a very serious face that it was out of concern for the victims and their families. Kairi seems to understand, Tooma looks less persuaded. But, more importantly, they decide to focus on where Labrum had escaped too since they lost their only lead.

The Patrangers start rechecking the houses of all the victims and find those same stuffed sharks at all of the house. While they investigate, the Lupinrangers are following them and waiting for them to find the Ganglar for them. All testing on the stuffed animals show nothing out of the ordinary causing Jim Carter to freak out leading to the decision to call it a day. Only Tsukasa remained in the lab and now her weakness is revealed; she REALLY loves stuffed animals. Turns out the titles "Unacceptable" or "Forbidden" friendship was referring to her and her obsession with stuffed animals. 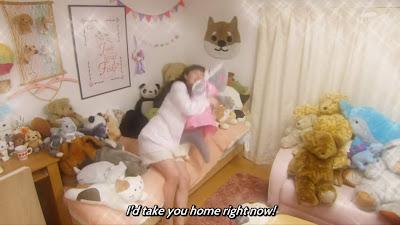 It seems she views such girly behavior as unfit for a cop, especially with evidence. However, she gives into her desires and hugs the stuffed shark causing her to instantly disappear. Well, I am surprised, I thought this was leading up to a fear of sharks but this turned into something really cute. I also thought the sharks were some kinda beacon he uses but this turned into quite the interesting case. 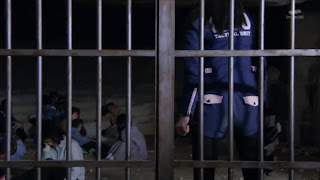 Well, no luck is being made on discovering the whereabouts but Tsukasa wakes up in a jail cell with all the missing people.Once there, she deduces that rubbing ones face against the shark toy activates the warp switch, although no explanation as to why the scans didn't pick it up is given. She manages to blast down the cell door setting everyone free while the other two try to figure out what happened to her. Unfortunately, she is ambushed by Labrum.

Unmorphed one on one, Tsukasa is not doing well, Labrum is pretty made that his "merchandise" was messed with and says he will just sell her at a high price. I tell you, nothing makes me dislike someone more than when they refer to people as products, it's a slave owner trait and really makes you want to see this Ganglar blow up.

Tsukasa doesn't think the others will be able to figure out the warp trick but just has she thinks that the other two arrive to help her. They all henshin up and we are ready for the showdown. 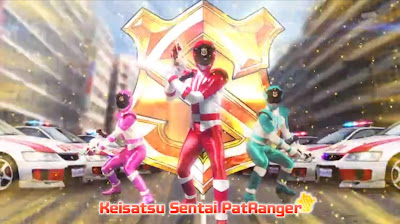 Well, that is what we are lead to believe but first they cut back to the restaurant the Lupinrangers are running to show Umika waiting for the other 2 looking very sad. This episode sometimes feels like it keeps forgetting about them. Well, luckily she hears the news report about the victims escape and informs the others. The three of them rush over to the battle that apparently moved from the cave to the woods off screen and join in the fight as well.

The fight is really cool again. Despite the two teams fighting mainly with blasters they do some cool moves, even having Patichigo use on of the foot soldiers as a shield for LupinRed's shots. Well, in the mist of it all, Tsukasa decides to return the favor for Umika's info; she kicks the Ganglar over to her giving her a chance to steal the treasure before they finish him off. 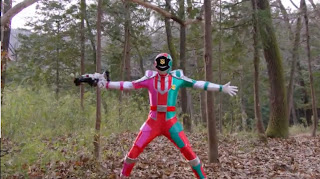 Both Red's announce the finisher but then Good Striker re appears and chooses the Patrangers to give the finishing blow. Probably because it was their episode mainly. Well, they get to do their fusion finisher again, causing Labrum to fall. Afterwards the two teams point guns at each other but is interrupted by the good old "make my monster grow" routine. As a reminder, Goche places a new treasure item in their corpse causing them to come back to life as a giant.

Since Good Striker is in the Patrangers hands they get to combine mechs and go on the offensive. They, actually start taking a lot of damage from Labrum's warping ability. LupinYellow figures out this trick and the Lupinrangers jump into the battle. Goodstrike decides to abandon the Patrangers and combine with the Lupinranger's mechs, funny and unexpected, I thought since the Patrangers were the main focus of this episode they would get the finishing blow. Nope, seems Lupin Kasier gets to end things and thankfully the CG was used a lot less than last time we saw him. They defeat the Ganglar and bid him an Eternal Adieu and Good Striker leaves once again.

The episode ends with the Lupinrangers returning one more Lupin treasure item and the Patrangers revealing they figured out the warping through recordings of the investigation. Turns out, Keiichiro always knew Tsukasa liked stuffed animals and simply thought nothing of it which is how he thought to try it. Everyone else at base however is quite shocked, thinking it's cute and leaving her embarrassed. Felt like an anime moment right there.

I am genuinely very impressed with this episode. The first 3 all felt like the Lupinrangers were the real main characters and these three were just extra so it was nice to see them get the spotlight for a change. Normally I can predict what will happen pretty well with these shows but this one caught me off guard quite a few times. They were all small things but it is still nice to see that the writers can still be original and creative after all these years. When I heard the title, I thought it was going to be about the Green x Yellow arc they teased at the end of episode 3 but this took me off guard and I appreciate it. So, overall, it isn't a ground breaking episode by any means, no I'm sure several anime had similar plots, but I can't honestly think of anything really wrong with it. Especially coming off that plot hole mess of a third episode. 5/5
Posted by Cendoo at 2:05 AM