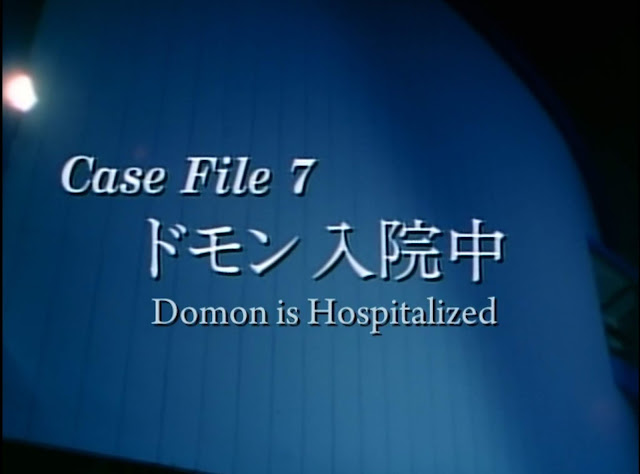 Back again with a lot of hesitation. So far this season has had fewer good moments than bad or uninteresting. Can't say this title is catching the eye much, sounds like an episode to a soap opera. Last episode's preview has teased an episode centered around Domon and him getting a case of amnesia, which already does not sound interesting. Regardless, let's give this episode a try.

The episode begins with Domon putting flyers into the mail slots for apartments when Domon looks into the sunset with an interesting expression. Tatsuya sees him and says not to slack off but Domon makes an interesting comment; in between 1000 years everything, even the sky, feels different. A pretty short scene but that really does make you curious. They get lunch as Domon starts telling stories about his family with 6 siblings and time as a Grappler while showing to be upset about getting fired from it. Tatsuya shows no interest in this and decides they are leaving if Domon isn't going to eat. Please no, Tatsuya was the only character I liked so far, don't portray him as a jerk. 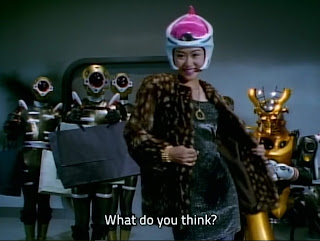 Meanwhile, Dolnero is upset about their lack of money and sees Lila took some of it to go on another shopping spree. They begin to fight, not with much anger though which felt a bit off, but Gien interrupts them with his selection of another prisoner to unfreeze. So far, these three have gotten very little screen time so I am hoping they have more than just this scene. 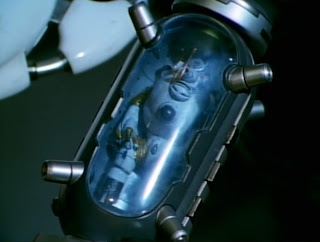 This new prisoner is blue which I suppose is supposed to signify that it is a medical criminal. If this is a case of a crooked doctor than there are a million way this episode can go. There are many real life cases of doctors running pill mills, doing illegal experiments or treatments on patients, or maybe even some kind of back ally doctors. Bottom line, it is not hard to make a concept like that interesting so this may be another good episode after all.

Back to the Timeranger's apartment, in the middle of the night, Domon is rushing out saying he is late for a match. Everyone, except Yuri, is woken up by this with a little bit of slapstick as Ayase implies he imagining it because of still being half asleep. He rushes out into the city but stops when he doesn't recognize his surroundings. Tatsuya chased after him concerned but Domon shrugs him off while again claiming he has a match to get too before collapsing in the street prompting Tatsuya to call an ambulance. Now that is more like the Tatsuya I know.

At the hospital, the doctors are confident that Domon will be fine after a nights rest and leave Tatsuya to fill out the paperwork for him, to which he makes up a fake last name for him that they don't show yet. I wonder if this is to hide their identity or if he just doesn't know his last name. 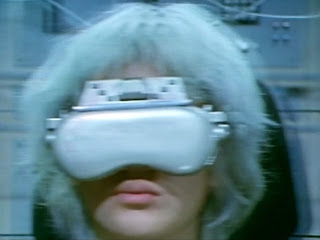 Cutting back to the apartment, we learn that what actually happened was a condition known as "data drunk" which, to be fair, is a pretty cleaver name. Before they traveled back to the year 2000, rather than simply studying, the 4 future timerangers had data about the era planted into their minds which has some side effects. Sometimes people get their memories confused causing them to temporarily loose perception of past and present. However, cases of this are not known to get as bad as Domon's causing everyone to worry. I will give them credit, this is very well thought out and does make sense with the continuity.

Back at the hospital, Tatsuya was given this explanation over the phone and decides to stay and look after him Domon starts dreaming about his time as a professional grappler. An interesting form of fighting sport as both people wear armor and have their choice of weapon; yet Domon always fought with only his hands. While all this is going on, the prisoner is lurking around and slowly turning the hospital staff into his servants. How this is done isn't explained but a shot is shown so it could be some kind of mind control serum. 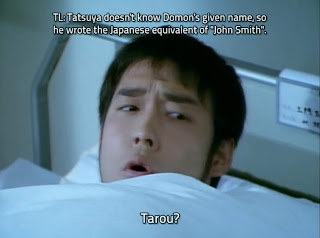 Domon finally wakes up and seems to be back to normal. However, he does not sound happy and calls the year 2000 deary out of some frustration. The nurse, who is posses, then comes in for the checkup revealing the fake name on the forms to be Tarou. Which turns out was simply because Tatsuya didn't know his real name. I honestly thought there was some meaning behind that but it turned out to be a Jon Smith. Now, that was funny.

Things start to unravel when the nurse hands Tatsuya the doctors bill of 1 million yen. He runs outside the room after her in confusion only to find mayhem going on with all the patients. People are getting huge bills and being dragged places by the staff for treatment they don't want or need. Once again, it is all about the money. Was kind of hoping for a more dark motivation this time but I suppose this makes more sense.

Domon, having been led to the exam room, is greeted by the prisoner who we finally get to see. Goku Doku, the murderer doctor. With a name like that I am starting to wonder if the staff were actually possessed or "replaced" so to speak. Can't say I was expecting the camera head though. Does not look like examining equipment it looks like an old fashion flash camera. 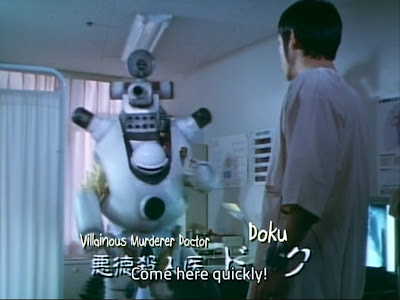 Sadly, seeing this living robot causes Domon to think it is the year 3000 again; talk about a relapse. Tatsuya calls the others to tell them about the unusual activity and asked if any prisoner would cause this. A quick data search reveals it to be Prisoner #41 Doku, sentenced for 500 years for medical malpractice. His mangled surgeries caused dozens of deaths, although it doesn't say if they were intentional or if he was just a lousy surgeon.

Domon gets knocked unconscious by Doku who orders him to be moved in for surgery. Turns out he is a loon as he likes to do surgery with a chainsaw. Tatsuya, who has been desperately searching for Domon, finally discovers the room as the other 3 TimeRangers arrive. They burst in and save Domon who has another data drunk episode as he now thinks he is a kid late for school. Normally, that would just be silly but in this situation, were he was inches away from getting his head cut open, it is still silly, but funny.

While chasing after Doku, Tatsuya tries to get Domon to remember who he cause but seeing Tatsuya's face causes him to remember Captain Ryuya from the first episode leading him to attack. Tatsuya decides to have the other 3 chase Doku while he deals with Domon which reveals somethings he was keeping bottled up. Turns out Domon was worried he won't ever be able to see his family and friends again from his era this whole time which leads to an emotional scene. After landing a hit on Tatsuya, Domon finally snaps out of it and remarks that the sunset looks just like the scenery from his house which is a small connection to home causing him to burst into tears.

Going back to Doku, the 3 TimeRangers are struggling but Domon and Tatsuya arrive just in time to save TimeBlue from a poisonous injection. Why is it that rangers always struggle a lot more when their team isn't whole? Anyway, time for the main event.

The fight is over pretty much as soon as it begins. Doku is completely dominated by TimeRed and TimeYellow with the ladder getting to deliver a finisher. 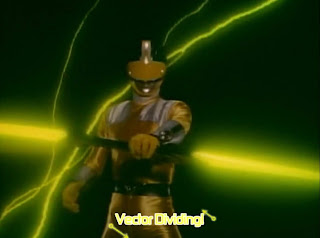 Now I said A finisher because it wasn't THE finisher. After taking the Vector Dividing attack (which was a series of sword slashes) they still have time to use their bazooka on him and yet he still survives well enough to remove his seal causing the giant form. That felt really forced.

The giant battle is even shorter than the last episode where they immediately surrendered. Honestly, more time is spent showing TimeRobo (their MegaZord) being summoned and forming than the actual fight itself. They show up in their TimeJet Gamma form, do a tornado attack, switch to Alpha and do the finishing blow. Doku doesn't even  really fight back except for missing once.

The episode ends back at the TimeRanger's apartment. It is revealed to the others that Domon was homesick which made his data drunk state get worse. Also, Tatsuya tells the others that he cried and they all laugh, no emotional support at all. He gets mad, tries to attack Tatsuya again and trips thus ending the episode.

This episode had a strong start but really fell flat on the second half. The story with the crazy doctor and Domon's homesickness was done very well. It had good drama and even a couple laughs. However, that is really the only thing done well. The same problems from previous episodes occur once again; the main villains only have one scene, the fights are too short and one sided, and the TimeRangers have no chemistry. Yuri, Ayase, and Sion all took a huge back seat for half of this episode. I know it was supposed to be focused on Domon, and they did a good job in developing his character, but why is Tatsuya the only one who gets to interact with his story? When Sion and Yuri had episodes everyone was reacting to it, so why not here?

The climax was another disappointment. Doku had a lot of great build up but ultimately barley did anything. On that note, they never even showed whether or not the hospital staff got changed back to normal. His final battle made little sense. He was easily able to take on 3 TimeRangers but was powerless against 2. It would have worked better if all 5 got to partake in the turn around moment. The giant battle kind of confuses me. I thought the one benefit to having them turn giant before getting destroyed was having the option to skip that battle all together, but for two episodes in a row we got a super short one that felt like they were only there because they had to be. There has to be some time of toy marketing reason behind that.

Overall, this was a great episode for Domon but below average for everything else. Not an episode you'd care to watch again but one you will remember since it did help build his character up. 3/5
Posted by Cendoo at 12:00 PM