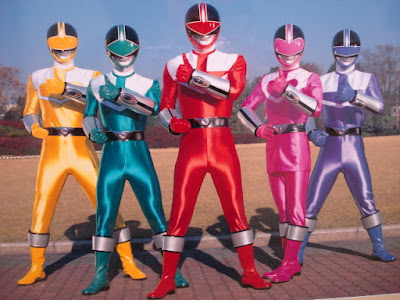 Time for, TimeRanger! Yup it is Mirai Sentai Timeranger, the 24th Super Sentai from the year 2000. Looks like their idea of celebrating the new century was to make a season staring rangers from the year 3000, no not Futurama, not Power Rangers Time Force either. Let's see how well Japan did.

First thing we hear is a narrator explaining the new world in the year 3000, it's following all the tropes, new intelligent alien life form, space travel, ect. But, the big kicker is the invention of time machines in 2990 and now they have a Time Protection Bureau. This is a bit confusing to begin with, they say that due to reckless time travel it put the present time on the verge of destruction so now time travel is completely forbidden but the Bureau still exists in case something happens in order to protect the past.

So, basically time travel is forbidden because it's dangerous, fair enough, but why not just get rid of all time traveling equipment? What's the point of keeping it active and having the bureau is the first place? There is no way such technology can be easily bootlegged on the streets or anything. 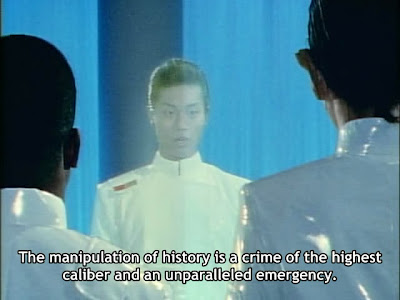 Well, moving on into the episode, it begins with the captain of the rangers, named Ryuuya, giving a speech to new ranger cadets, which is a very mixed group of people full of humans and aliens. His whole speech is basically just an excuse to explain some backstory of their organization to the audience. However, this scene is cut short when we skip ahead to the prison where we see criminals are being "frozen" into tiny capsules.
But, before anything interesting happens we get introduced to 4 of the future Timerangers; Domon (yellow) asks out Yuuri (pink), gets rejected then made fun of by Ayase (blue) then Shion (Green) recognizes Domon as a pro fighter then asks for his autograph. No, I didn't abridge that, that is all we get for now. 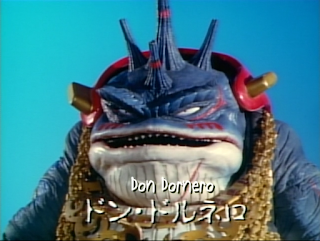 Is is at this point that we get to see the first look at this seasons main villain Don Dornero, He's a godfather parody. The Don. Although, this costume was used as a background villain in Power Rangers Time Force so it is kinda funny to see for anyone familiar with that. Well, it is his turn to get frozen and the people in charge of doing it are looking really smug. They try to shame him, saying that he was caught easy and that the freezing is painful, to which he replies "looking forward to it". I think it's obvious what will happen next.
Yup, a jail break, one of the guards was Gian in disguise and they shoot up the place to some interesting stop motion effects.

Well, the villains plan is simple, the cops keep bugging them so they're going back in time a thousand years in order get away from them. This of course causes a red alert and captain Ryuuya puts together a quick dispatch team. Domon, Ayase, and Shion are picked to their surprise, with Yuuri volunteering. Naturally, this is shocking to everyone since all of them are new recruits but Captain Ryuuya says it will be good practice, so they gear up and get ready to take off after Dornero.

I will say, they were much better prepared than time force. They were given 20th century clothes, had knowledge of the time period downloaded directly into their minds and even had a robot bird named Tock show up to help with piloting.

Now all the fun twists begin. First thing that goes wrong, turns out Don Dornero didn't travel back in time yet and planned to catch a ride with the Timerangers. Second, seeing this happen, Tock tries to start the emergency breaks but is shot by Captain Ryuuya. One last twist, as they arrive in the 20th century it turns out that Yuuri was an undercover investigator who attempts to to arrest Ryuuya, but that fails when he is revealed to be Lira (also called Lila) in disguise.


Well, the villains found their new hideout and the rangers are self tied up in the ship set to self destruct. Unlike Power Rangers, these rangers do not escape in time and are caught in the explosion all knocked out. Gotta say, things picked up pretty quickly in this episode so far.

This is where Asami Tatsuya (Red) comes in. During a jog he sees them all out cold and goes to give a hand. However, he looks exactly like Captain Ryuuya causing the rangers to attack and capture him. Meanwhile, we get our first look at this seasons foot soldiers, junk droids Zenits, upon which the villain trio use to attack a city in order to steal money. What for? As Don puts it, no matter the era everything starts with money. A statement time is only proving more and more true. Well, with Asami now tied up the rangers finally believe him to be innocent and conclude he must simply be an ancestor of Captain Ryuuya.

Tock finally wakes up, alerts them of Dornero's attack and shows them the chrono changers. However, five people are needed to unlock them for the first henshin. This actually takes us to a scene that I found very, well, not good looking for Yuuri's character. 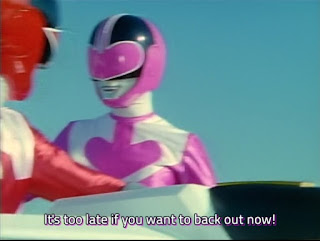 Asami gets released and chosen to be the fifth but he isn't properly asked to join, he's kinda manipulated. Yuuri starts asking him on the spot questions like "are you gonna waste those skills you showed? Don't you care about those innocent people who will get hurt?" Until he finally agrees to help.

I will at least give them credit in that they at least tested the chrono changers before going into battle. Too bad the morphing sequence has some pretty badly dated CG.

All that is left is the first true ranger battle of the season. It is pretty cool and fun to watch for the most part but there is an annoying amount of motion blur making some of the action hard to follow. The fight ends in a victory for the Timerangers with the bad guys forced to retreat. Gotta say, it really doesn't do a main villain any favors to lose a fight on the first episode. After the fight Asami tries for the second time to ask who the others are to which he is completely ignored, then everyone looks shocked at something off screen thus ending the episode teasing a part 2.

This episode was pretty mixed over all. Yellow is a boy, which by itself if fine but I'm really not a fan of the 4-1 ratio of boys and girls, or girl. The episode is kinda hard to get into at first with all the exposition going on but defiantly picks up in the second act. However, the pacing was not great and I'm really not liking the way some characters are introduced. The 4 Timerangers from the future barely get an introduction and are needlessly cruel to Asami. Even after they decided he wasn't the traitor Captain, they didn't untie him until they needed something from him and pretty much forced the role of TimeRed onto him. Also, having the main villain lose to the heroes on the first episode was not a good idea in my opinion. Granted he did escape but it shows him as little threat and more of an annoyance. Overall though, I will say the episode wasn't terrible, it was harmless and did it's job of introducing the season well enough. While I didn't like it much it was suspenseful enough to where I could understand someone else getting into it. 2/5ing into it. 2/5
Posted by Cendoo at 3:00 PM