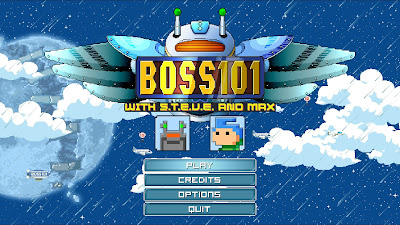 Kaiser Sensei here and it is time for a video game review! Yeah I still do those, get over it(with kindness). If you click on the "Read More" button then you'll be able to read my review of the comedic shmup, Boss 101 for the PC.  Yeah, that's all that needs to be said in this hacky intro piece, now on to the review and here's hoping the game won't be as hack as this intro. 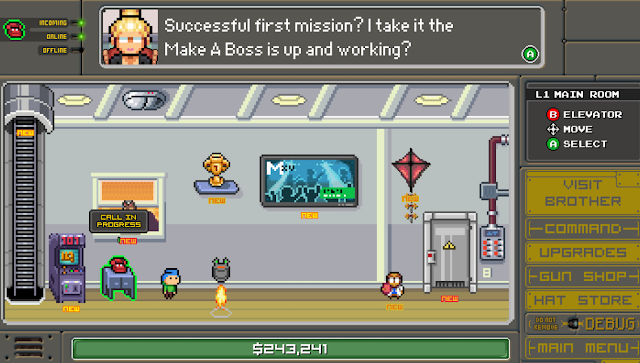 Boss 101 is a comedic shmup that's about Earth in the far future.  How is Earth into the future?  Well, it's a lovely place full of sunshine, rainbows, and happiness... If you are an evil robot that is! Yup, Earth has been taken over by evil robots and the humans aren't too happy about that.  Sure the sunshine is nice but being slaves is a bit too much.  Enter our main character, Max, he is the one whom is going to try to stop the robots with the help of his friends, his jet pack, and his gun.

The story in this one felt like a Saturday morning cartoon mixed in with a late night cartoon made for stoners, with it's fun premise and it's Adult Swim styled humor.  The jokes are also very topical with a lot of references to modern day pop-culture and I did find it funny but towards the end, the jokes lose their edge and tried way too hard to be funny.  Most of the story happens in between stages and most of it didn't feel important to the story but I didn't care as the cut-scenes are fun and charming regardless. 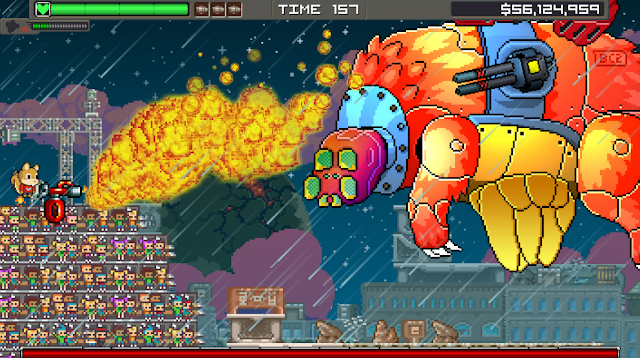 The gameplay is a bit different than you'd find in a typical shmup, the gimmick is that all of the levels are just boss fights and they cut out the levels that you'd normally see before you get to a boss.  That isn't the only gimmick, the other gimmick is that the bosses are randomly generated!  There's a bunch of boss parts in this game and this game uses those to help create a boss to fight.  This sounds like something that'd get tiresome quickly but believe it or not, it felt fun and fresh every single time.  There were no times where I felt like that this game was getting repetitive despite being an overly repetitive concept.  There are some non-randomly generated bosses in the story mode as well and they were also fun to fight.  Replay value is also strong as each stage also has side-missions such as beating a boss quickly, rescuing people, etc.
.
The bosses aren't the only thing to worry about as you've got a time limit to beat them in and the character that you use may not be tough enough to destroy them within that limit.  How do you overcome this?  Well, you'll earn money by defeating bosses and you can use this cash to upgrade your stats, weapons, and buy new characters and, boy!  There's a lot of characters, over two-hundred of them and they all have different abilities.  Controls are very simple and ultra smooth which only adds on to the fun of the game.  I know the game recommends playing this with a controller but playing this on a keyboard is honestly just as fine.

My problem with the game is that it has some balancing issues, the game starts you off as way too weak...  That's not my problem, I expected that but once you do level up your character, you become way too strong to where there's barely any challenge in the game.  So the balancing takes you from one extreme to the other, there's no gradual increase in difficulty here.

My other problem is that this game throws way too much at you at once.  What I mean by that is that you've got a few modes and options such as arcade modes, story mode, mini-games, bonus rooms, and these aren't bad modes, far from it!  The problem is that the game shoves these all into your face as soon as you start a new game and it gets quite overwhelming, leaving me confused as to what to do first.  The confusion didn't last long though, only about five minutes but it would've been less confusing if the game just slowly introduced these things... Yes, I know I sound like a madman by saying that but you'll have the same feeling as I did when you first play this game.  Even with these problems, they aren't enough to destroy the fun of the game but these loose screws could still use some tightening. 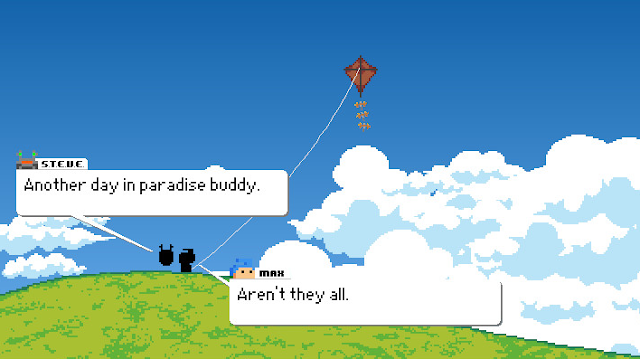 The graphics have a very sweet pixel-art look and very nice animation.  Yup, nothing else to say here... I know, boring right? 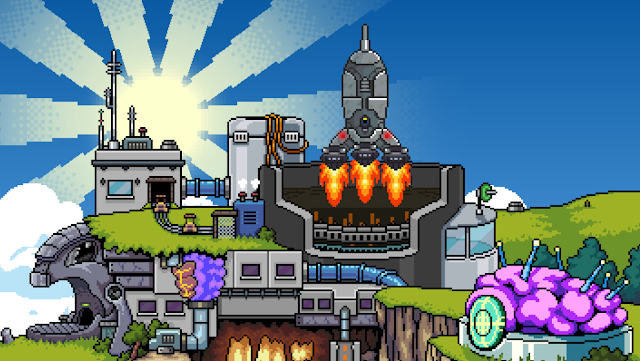 The music doesn't sound bad but it doesn't fully work with this game, it sounds like something you'd find in a generic 3D platformer.  Sound effects were a bit on the annoying side, the main gun sounds like that pop-corn is constantly popping and made me want to play this game on mute. 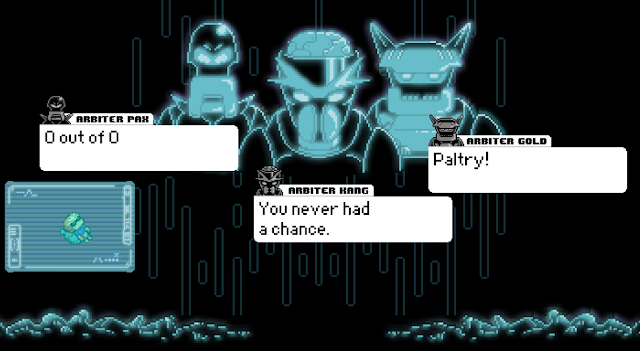