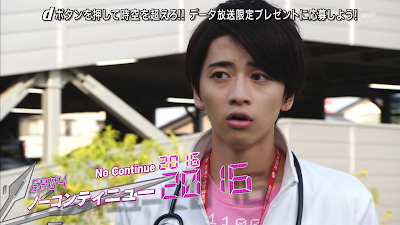 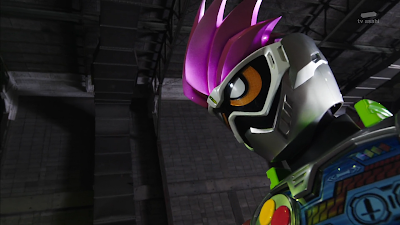 This episode starts off with Kamen Rider Zi-O and Kamen Rider Geiz being beaten up by the Real Kamen Rider Ex-Aid, until Time Jacker Ora interrupts the battle, freezes time, and re-activates Evil Kamen Rider Ex-Aid.  What a bummer, this fight was just getting really good too.  After Evil Ex-Aid gets re-activated, all of our heroes de-morph and return back to the real world... Because they travelled into Evil Ex-Aid's video game realm in the last episode.  Our heroes also have some bad luck as M (The Real Kamen Rider EX-Aid) has not only lost his powers, he has also lost all memory of Sougo, Geiz, and Tsukuyomi.

Our heroes have a meeting at home base, where they discuss how to get M back to his normal self.  Geiz wastes no time and decides to go back to the year, 2016, where he'll put a stop to Evil Kamen Rider EX-Aid.  Sougo and Tsukuyomi just let him be and they continue on coming up with plans.  Once Geiz is gone, Tsukuyomi tells Sougo about Geiz's fight to save his friends during Future Sougo's evil reign and how it has been a very tough battle for him.  Tsukuyomi also reveals that her plan is to try to save the future by getting Sougo on to the path of being good, therefore being able to save everyone.  I quite like that plan and I hope it works out as I like the good version of Sougo over the evil one. 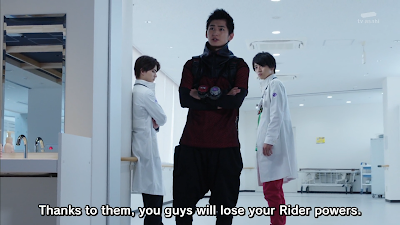 Geiz has travelled back to 2016, where he tries to convince Past M that the Time Jackers are out to change time by creating an evil Kamen Rider EX-Aid... No luck though, he can't convince M.  Remember that opening scene from the past episode where we saw Evil EX-Aid being made?  Well, now we are back at this scene but an extended version with some deeper information.  That guy who got turned into Evil EX-Aid actually had a reason to do so as he was seeing his son being carried into hospital and wanted to save his life, so he made a deal with Ora, she said that she can save him.  This scene is a game changer and it makes you feel bad for poor old Mr. Evil Kamen Rider EX-Aid as he only wants to save his son and I can't really blame him for doing so.  If you could save your loved one from a fatal disease, you are willing to go to some pretty out there places.

The Real Kamen Rider EX-Aid ends up losing his powers because Evil EX-Aid has them and Evil EX-Aid wastes no time and starts collecting victims.  Geiz has noticed this and has started attacking Evil EX-Aid, while performing sick stunts on his motorbike.  Bad news for Kamen Rider Geiz, he can't stop Evil EX-Aid, so he calls Sougo and Tsukuyomi for help.  M has joined the battle against Evil EX-Aid but instead of using his fist, M uses his words to talk to Evil EX-Aid and tells him that this isn't the right way to help his son.  Soon after this we get more information about Evil EX-Aid's victims and it turns out that they were picked because of their organs, organs that can be used on Evil EX-Aid's son.  Evil EX-Aid is sick of talking, so he just warps away in search for more unwilling organ donors. 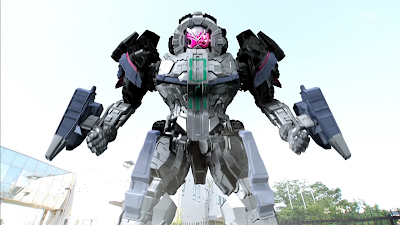 All of our heroes are back on good terms with M and Sougo even gains another power, yup, he gains M's Kamen Rider EX-Aid medallion.  Sougo jumps into his time machine but gets attacked by Time Jacker Ura!  Ura uses his own machine to attack Sougo, meaning that it's...  ROBOT BATTLE TIME!.. And it's also HENSHIN TIME, BABY! Sougo transforms into Kamen Rider Zi-O, while he is in his robot time machine and we also see the return of the trippy spinning background transformation effect. This time, this effect is not as painful for the eyes... Actually, it's quite smooth.  The time machine transforms as well and we get a Mega Zord battle and I am not used to seeing that in a Kamen Rider series.  Kamen Rider Zi-O fights off Time Jacker Ura and travels back in time to where Kamen Rider Geiz is fighting Evil Kamen Rider EX-Aid, which happened earlier on in the episode.

Woz is ultra happy about this and does a huge loud speech about Kamen Rider Zi-O being their evil overlord.  Kamen Rider Zi-O defeats Evil EX-Aid with ease, he beats the crud out of him and finishes him up with a move that looks right out of Marvel Vs. Capcom 2.  The day has been saved, the man that was Evil EX-Aid is back to normal, his son has also been saved, and Sougo has gained full trust of Geiz and Tsukuyomi and that concludes Episode Four of Kamen Rider Zi-O. A real dialogue heavy episode that's designed to strengthen the drama and characters and I have my ups and down about that.  I did like how we got some questions finally answered, even though we predicted what those answers would be in past episodes but it is still nice to have them answered anyway.  Don't know what I'm on about? I'm mainly talking about Tsukuyomi's mission regarding why she hasn't flat out assassinated Sougo yet.  We also get reasons to why Geiz has loosened up on trying to eliminate Sougo as well but I wouldn't be surprised if we still see him trying to destroy Sougo for the sake of comedic effect.  I did like how we got an extra layer added to Evil EX-Aid, even though we didn't need to but going that extra mile helped to make for some strong and emotional drama and depth to the character and episode.

Jumping into this right after the previous part (yes, this is a part two of a two part story), prepare to be disappointed, you won't get that epic Kamen Vs. Kamen battle that was teased and I did find the solution to the cliffhanger to be a bit weak... Then again, that's cliffhangers for you.  Think of the transition between the two parts being just like having a fire blown out by a fire extinguisher.  Part one being the fire and part two being the extinguished flame.  Yes, that may sound ultra negative but what I mean by that is that part one was full of hot and exciting stuff and part two is where this story cools down.  The story overall wasn't bad, the strong drama did stop this one from becoming boring.

Yes, there is indeed action, not all that much but you do get some interesting stuff.  You get a lot of showcasing of special powers and it's not as obnoxious as I make it out to be, it was actually quite satisfying to watch and served as the cherry on the top and really enhanced the story.  What I wasn't expecting was Kamen Rider Zi-O to have a Mega Zord battle with one of the Time Jackers and it was weird to see.  Sure, there are robots in this show but they aren't typically used by our main hero.  The robot even transform into a special Kamen Rider Zi-O version of itself and it is very exciting to see. 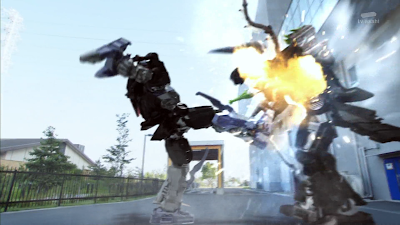 I'm a bit mixed on the robot battle though, it was mainly punching but that wasn't the part that bothered me.  What bothered me was the effects, the CG kept on switching between from looking good and natural to ugly and awkward.  The trippy background spinning kamen transformation effect has returned and it has been improved on, it looks much more smoother and it doesn't hurt my eyes and I love how it is being used now.

Overall, not a terrible episode and has some strong drama but if you want action and an epic conclusion to the previous part then prepared to be disappointed.  As a single episode, I give it a 6.5 out of 10.  As a complete two part story arc, I give it a 7.  That's it for this weeks summary and review of Kamen Rider Zi-O! Make sure to come back as next week I'll cover episode five.  This is Kaiser Sensei (while partly ripping off of Viewtiful Joe at the same time) saying, HENSHIN TIME, BABY! 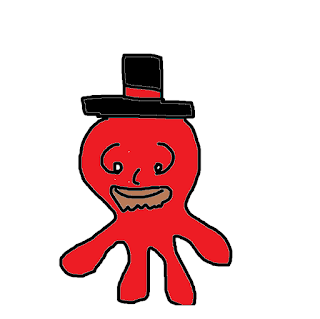 Posted by Retrokaiser at 6:19 AM