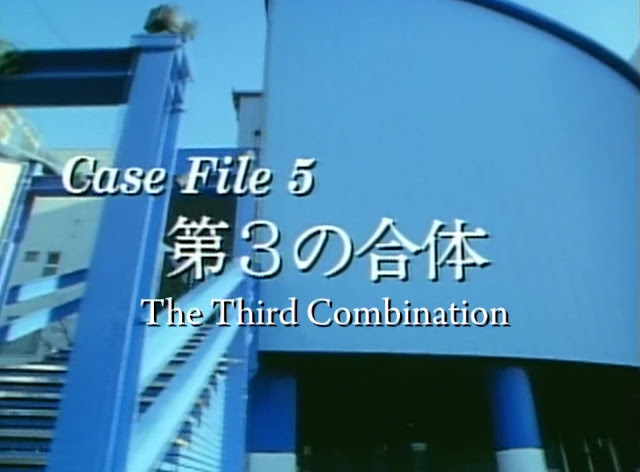 Time to look at episode 5, last episodes preview showed this episode is all about Timepink. Showed her trying to kill a monster instead of capturing it. I remember that episode's stock footage in Time Force when Jen tried to do the same thing so I'm curious about it's origins. 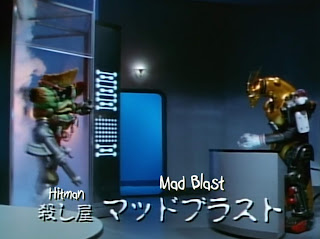 Keeping the tradition going, the new monster is unfrozen immediately but this time with some interesting dialogue. Mad Blast, first thing he does is ask if Dolnero sent Gien to finish him off but he says that he's already forgotten about Mad Blast; what could that mean? Anyway, this monster has no interest in acquiring money but prefers killing, so Gien tells him to just go kill all he wants given the time period they're in. So basically, no plot but just cause trouble this time around? Interesting.

Cutting to the Timerangers, seems Sion only needs to sleep once a year, lucky him, and Tatsuya is getting snapped at for using the term "alien" which is apparently offensive. But, more importantly, Yuri has got her first job, not detective but cleaning since Tatsuya added "and other" do their work listings. A huge cleaning job that she tries to do all alone, the others come to help but she doesn't seem all that impressed with the gesture, something Domon doesn't like. He almost gets into a fight with Ayase, Sion knocks over a bucket and Yuri gets mad. Overall, a pretty silly scene but I like it. Sometimes it is nice just to see characters interact with each other, helps build their world and make them likable.

Meanwhile, Lila is going on a shopping spree with some of their stolen money and having a good time but this is interrupted by Mad Blast, well, blasting away at random people including her. This of course causes the Timerangers to rush over to the scene and finally we get the mid episode fight scene that previous episodes were lacking. Pretty quickly, Mad Blast's rowels on his boots cause Yuri to have flashbacks. Around Mad Blast's neck are some bracelets that these flashbacks reveal to have belonged to Yuri's family, that is not a good sign. Needless to say, she is furious and charges him with the intent to kill, but is stopped by others causing Blast to escape. Through her screams, Yuri states that he was the one who murdered her family. 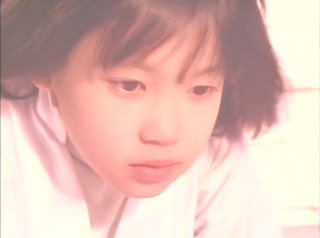 Back at home, Tac tells the story of how Yuri's father was also an anti-mafia investigator in charge of the Dolnero case; however when she was 10 in 2988, her family was shot and killed in front of her. Although, officially there was no witness or proof, the flashback does confirm that the deed was done  by Mad Blast after a hit had been placed on them by Dolnero. Mad Blast wasn't even charged with murder, was only given a 15 year sentence for a fight; this only added to Yuri's pain knowing that the monster that orphaned her never got justice. It is a pretty sad flashback, though the kid they got for kid Yuri didn't show it too well with a pretty blank expression.

Regardless, Tac does point out that she doesn't have enough evidence to prosecute and regardless, killing a prisoner for personal reasons is the worse thing a crime investigator can do. Yuri assures them that she did not join the force for revenge and knows that they only have the right to arrest them, saying it was just impulse from bad memories. But, it is clear to the others that the burden is still to much on her and Tatsuya tries to think of a way to help.

The next morning, Mad Blast attacks once again and Yuri is the first out the door. She quickly morphs, calls timeflyer and goes after the monster. The others, fearing she is going to kill him, quickly morph and give chase on foot. 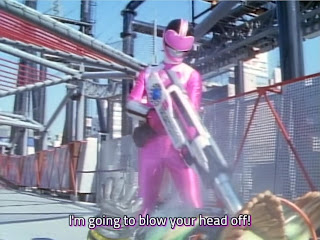 On the battlefield, things seem to be going as feared. Upon arrival, Yuri quickly gets Blast pinned down with the intent to kill. The other 4 arrive to try and talk her out of it but the words don't seem to go anywhere. Blast is confused and scared and asks why which leads to rapid back and forth about what happened. In an act of desperation to save his life, Blast shows her the video message of Dolnero ordering him to kill the investigator and his family claiming he wasn't his fault. This confession, turned out to be Yuri's plan from the start as all she wanted to know the truth but was surprised to actually find proof.

Well, with all the drama gone, all that is left is for Timepink to wrap up the battle and take back her fathers bracelet, which she easily does. Just like last time though, he makes himself grow just before being defeated.

Surprisingly, this time they seem to be loosing in the giant battle. Blast keeps them away with his Gatling gun so they can't get close or fire back. Luckily, or conveniently, Tac has a solution, a third 3D formation, TimeJet Gamma, basically a bigger ship designed to counter short-ranged attacks.

No knew explanation is given, I suppose they always had this formation as Domon makes a comment about how they should have been told sooner. It doesn't do much, just makes a tornado that causes some damage then they switch to Alpha (mode red) and finish the job. Tatsuya even let's Yuri deliver the final blow. Touching, yet also odd considering she is the leader. Well, regardless that is another criminal re-captured and another victory.

The episode ends still on the battlefield. Since Yuri was able to sort out her feelings alone the others worry she doesn't need them. However, that is put to rest as she asks them for help cleaning up the building from earlier and thanks them all for worrying about her. Simple, yet sentimental.

This episode was pretty good with great writing. The drama felt real, the acting was great (minus the kid), and the pacing didn't drag at all. There's only two things that bother me about it. First off, the fight scenes, while I was happy they had more morphed fights they are still too one-sided. I can only recall two instances where Mad Blaster got any hits in and one of them was only to show off a new mech combination, felt more like a toy add than usual. It really takes away from the fun when battles are so easy. My other is the main villains, where are they? Gien was there to unfreeze for one scene and just basically said, "go do whatever you want I don't care." Lila made a brief cameo when the first attack happened but immediately retrieved when the Timerangers showed up and that is it. No reaction to winning or any kind of evil plot; almost like they don't care about these characters. However, as a whole, this is probably my second favorite episode so far and I am hoping later ones continue to build on this. 4/5
Posted by Cendoo at 3:00 PM