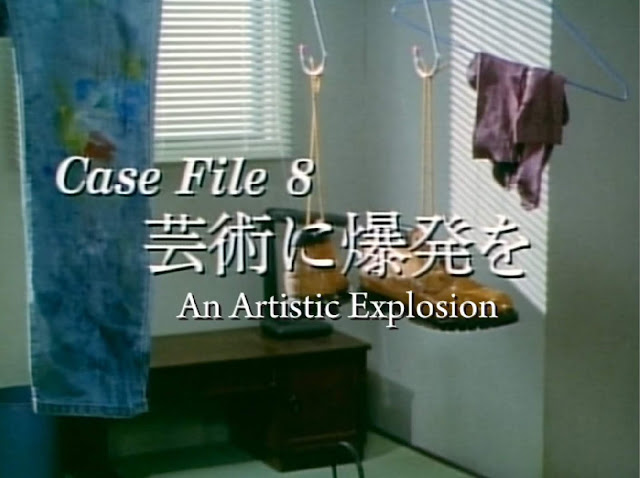 Time for, the 8th episode. Last episodes preview showed this episode will center around Yuri, Lila, and an artist. Perhaps a love triangle will take place? Or maybe someone looking for more art inspiration. Either way, I will just be glad if one of the main villains finally gets some screen time. Kindly click "read more" button to find out how this episode went.

This episode begins innocently enough with Yuri excitingly calling the others over with their new job. What is it? A missing dog named John. Why is she so excited for this? Simply because she finally gets work that falls under detective work. However, the flyers they are given have a less-than helpful drawling of said dog. 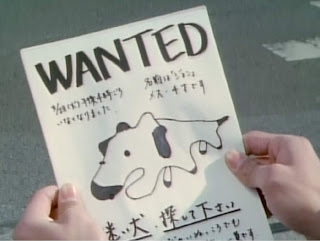 Personally, I am kind of hoping they actually do find a dog that looks like this. Sadly no, this is just way to get the artist theme going quickly. They rant about that for a bit but it is quickly cut short when they see something fly by. This strange object lands revealing itself to be this episodes monster of the week; Hijacker Nabokov. 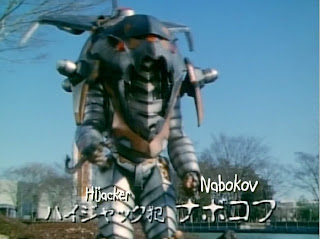 I am impressed on how quickly this episode is jumping into the action. Usually, at least in this season, the plot gets more exposition for awhile before this is revealed. It is a nice change of pace. What exactly is he doing? Oddly he is there to steal the paintings of an artist named Toba Kenji and abduct him in the process. He almost succeeds, but the TimeRangers show up and fight him off. It isn't a long fight but it is enough for now. 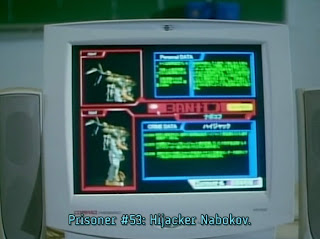 Toba gets rescued from the lake; which he got knocked into during his attempted capture, when Tac calls them with information on Nabokov. Although, the only thing said about him is that he is a Hijacker before the focus gets shifted back to the painter.They try to wake him up and figure out why he was attacked but he is weak from hunger, so they take him back to their apartment for some food. Although before that he manages to give Yuri a big grin.

As they arrive, Tatsuya throws a jacket over Tac to hide him and they give this painter some ramen. While stuffing down Ramen, Toba the painter explains he hasen't eaten in three days from not being able to sell any of his paintings in a long time. Meanwhile, Yuri is frantically checking the police databases to see if any similar cases have ever happened to try and find out why Toba was targeted. All the while, Toba keeps staring at her with a big, almost creepy grin. Starting to sound like my artist inspiration prediction is coming true. 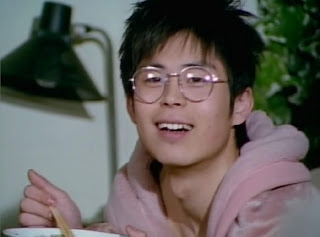 Once the future TimeRangers hear his name they immediately get shocked, know why he was targeted and Sion asks for his autograph. They don't say it but I can tell from that reaction that he is a famous artist in the future. Cutting back to the villains prison base, Lila is tending to Nabokov and poking fun of him for failing the capture. He claims it was due to not being about to start his engines properly (whatever that means) and swears he will succeed the next time. We also learn the Nabokov was once an infamous airship hijacker which is a crazy coincidence. Ever hear about how Power Rangers Time Force had to be censored because of the 9-11 attacks?

Moving on, Gien reveals that Toba Kenji's paintings are worth Trillions of yen in the 30th century. But, that is a problem since they aren't worth anything in the 20th century and they had no plans to return to the future. However, making money actually isn't the plan for once, something even Dolnero and Gien were shocked to hear. Turns out, Lila wants him to paint her portrait as a masterpiece so her beauty will go down in history. Now that is a unique plot twist.

The TimeRangers decide to pay Toba's home a visit to see his paintings. All except for Yuri who patrols the area for the Londerz Family. When they get inside, they find the place a mess but the missing dog from earlier was found there. Apparently, he just liked visiting the place which was a cute way to wrap up that little story/job they almost abandoned. Toba offers Tatsuya a painting as thanks for the food, but he can't take it without changing history which leads into the story about how his work isn't selling. Toba had moved to Tokyo to pursue painting but to no success and with his parents getting old he may be forced to leave soon. This is kind of a sad reflection about how so many famous painters had no success with their work until after they died.

As both fans of his work, as well as wanting to maintain his place in history as the "artist of the century" the TimeRanger's try to encourage him to keep painting. They ask him what he wants to draw to which he replies, "Yuri-san" (I know, shocking twist). It is not uncommon for artists to be inspired by women or people they develop crushes on but did they really need to make him come off so desperate and creepy? 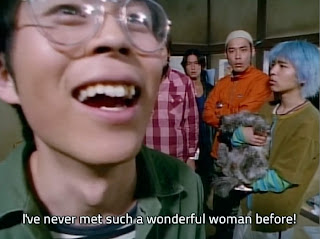 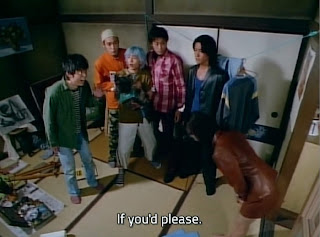 Naturally, the 4 of them think there is no way Yuri would agree to be his model but at that very moment she walks in and agrees. Everyone is shocked and they openly call it a surprising turn of events. Although, personally, I am not buying it. Lila wants to be his model and has shown she has the ability to take the form of other people so I am predicting another plot twist right now. But, at the same time it is an opportunity to be painted by an artist who will go down in history as a genius. However, that would also change history, so now the curiosity is building.


Yuri begins getting sketched while the others leave them alone and go on the lookout for the Londerz family. Turns out I was wrong; this is Yuri who agreed only in the hopes of attracting the Londerz to attack. Toba can tell she isn't really into this and can't bring himself to finish his drawling. She feels a bit guilty but then things go south as Nabokov returns and kidnaps Toba. Although, he is not having a bad time it seems. Lila brings him to a nice artist room, calls him a future genius painter, brings him food and says he can use any of it in exchange for drawling her portrait. Honestly, other than the kidnapping, this isn't all that evil.

Back to the TimeRangers, Yuri is feeling completely responsible for Toba's capture and is very frustrated her trap didn't work. Now, we get another one of Tatsuya's speeches. He is not happy with her and, to summarize, says that even for an investigation is is never alright to stomp on someone's heart and ignore their feelings so coldly. She doesn't respond, but gives a look that shows his words got to her.

Cutting back to Toba and Lila, it seems he agreed to draw her. However, he is unable to finish saying that no matter how good a lifestyle he can have he can only draw things he can put his whole heart into. A bit interesting considering he had paintings of buildings and the lake earlier but, nothing wrong with loving the simple things. Lila, is mad, very mad. She gives Nabokov the orders to finish him off since if he can't draw her than he means nothing. However, the TimeRangers arrive just in time to save him thanks to the dog being able to follow his scent. It is kind of funny how that dog keeps coming back into the plot. Yuri apologizes to Toba and now the ranger battle can begin.

I just noticed how little the Zenits have been used in this season. Normally the fodder foot soldiers are used all the time to show off some fights but this is their first appearance in a fight for quite a while. This is the proper fight scene that has been missing from this season. Even Lila joins joins in the scrap. All the while, Toba gets some huge inspiration from witnessing this and begins drawing once again.

Even though the fight is balanced a lot better, the ending in the same. The monster takes a heavy hit from the bazooka, than rips off his seal turning giant. Unfortunately, while the ground fight was much better, the giant battle was still a quick take out. They call Tac (who was still under the jacket funny enough) to form TimeRobo, start in Beta (mode blue) land a couple hits then switch to Alpha (mode red) for the finisher. All Nabokov does is miss his shots, run forward, than get taken out and re frozen with his last word being "Lila".

The episode ends at the train station where they are seeing Toba off as he is returning to his hometown on the country side. While promising to keep the TimeRanger stuff a secret, he gives Yuri the drawing of her he did. He is about to confess his feelings for her but before that his train is announced so Yuri rushes him onto it and gives some words of encouragement while waving him off. Outside the station, the other 4 are waiting her and tease her about the situation while trying to see the drawing. She refuses to show them though as it is now her treasure. How sweet. 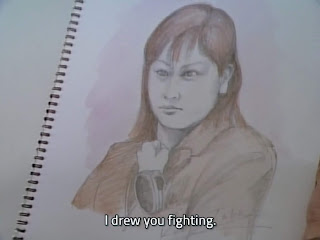 Finally, this is the well balanced episode that I've been waiting for with this season. The writing has never been bad, but the balance of that and fight scenes has always been way off. However, this time around, things were done just right. They had a mini battle in the beginning, and a proper final struggle in the end with the foot soldiers and some give and take action. The story was well paced too and I am happy that some of my predictions were wrong. It shows this season can be worth watching to find out what will happen. Really, the only problem I have with it is once again, the giant battle at the end. It was just too one sided and ended as soon as it began. At least this time, that is the only complaint I have with it. Even the characters are starting to show some chemistry. 4/5
Posted by Cendoo at 5:06 AM