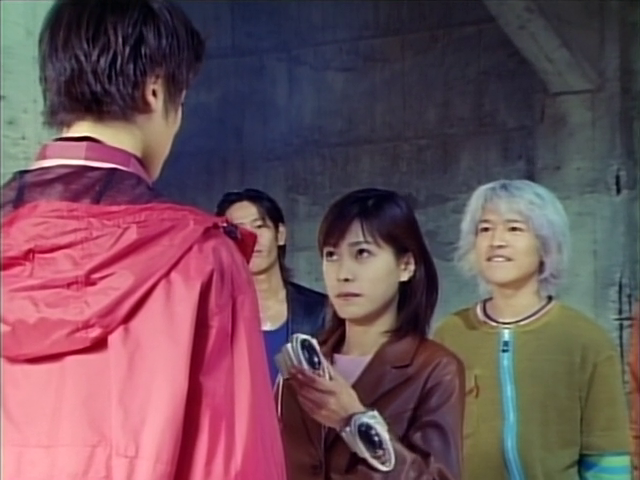 Diving into the second episode which can be translated as The Unseen Future or The Future Beyond Sight, I will say, I was hesitating because that first episode really didn't hook me too well but apparently it was suppose to be part 1 of a two parter so, let's give it the benefit of the doubt and dive in.


First thing I see is a reminder that Japan doesn't censor, Don Dolnero is smoking a cigar while the villain gang is recapping on the events of the first episode. This ends shortly as we cut back to the Timerangers who have finally decided to tell Asami (Timered) who they are. He is understandably confused but nobody seems to care. Yuri takes his Chrono Changer back while "thanking" him for being of some use then they all start walking off not caring whether or not he believes them. This is similar to what happened with Wes in Time Force but unlike that where the decision was split because of his immature attitude, this time nobody cares about Asami and are all treating him coldly. He isn't too angry though, just lost in thought about the 30th century, seems like he did believe them. Seriously though, I get what they were going for, trying to portray the future timerangers as being serious about the job but after all they've put Asami through, this cold treatment really comes off as unjust. 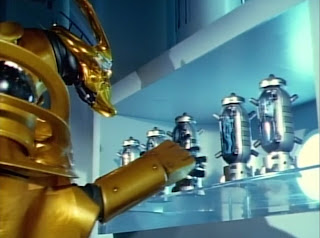 Going back to the prison, Gien comes up with the idea to unfreeze the prisoners and use them to help in their goals. Now we are introduced to the Monster of the Week formula with the first one being Jecker, a mass bomber. Once they're unfrozen, Don Dolnero says they will become part of his "family" which they name after the prison, the Londars Family. This is a Yakuza (Japanese Mafia) term for what is basically a gang. A group of people who are loyal to their family leader above all. I actually really like this concept, parodying a real life organized crime group, I guess that means the Yakuza will still be alive in the year 3000.

Cutting to the Timerangers I'm seeing a small continuity error. That last scene ended implying that the 4 from the  future had ditched Asami but now he is seen with them, relaxing as they set up and they are now being friendly. I guess it was never directly stated that they left the area but this is still a big change in tone. However, that is not really a bad thing, at least now they seem to be on better terms. Asami asks them about the future being set in stone as he wants to change it but the Timerangers job is to ensure it is never altered. They don't fight though, just some optimistic words from Asami then he decides to take off leaving the others to think about their situation and what he said. 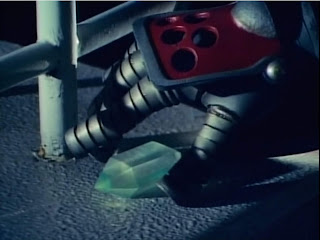 Later that night we see Jecker flying around on a jetpack as he plants a bomb that looks like a crystal. Meanwhile, Asami returns home where we get to learn a little of his backstory through an argument with his father. It's the age old tale where Dad wants you to take over the family business but you want to decide your own future. Seems he lost a bet with his father when he lost a karate tournament and had to go to his choice of college. The next morning a building blows up causing many casualties. Boy that is a violent turn, Many more bombs were planted with the demand of 100 million for each building. The police try to pursue Jecker and fail. Things are defiantly taking a more interesting turn.

In the wake of this, Asami decides to take action into his own hands, he convinces his father to let him try to resolve the issue and save him the money (another bet) and goes back to the timerangers. Once there, he overhears them talking about some bad news, it was decided that they cannot go home unless they capture all of Dolnero's gang and they are not taking it very well. However, Asami gives them a little speech about how the future may be set but the moments of now and tomorrow are there's to decide. This really seems to strike a core with them as they give him back the chrono changer and take off to pursue Jecker. This right hear may have just made the episode. That was executed almost perfectly.

Things move pretty quickly from here. Asami brings Jecker the briefcase but instead of money it is full of his bombs. They used their Intel on him to figure that one out off screen. Now, finally we get to see their unmorphed costumes and GOOD LORD THESE LOOK STUPID! I have no idea what they were going for with this design. 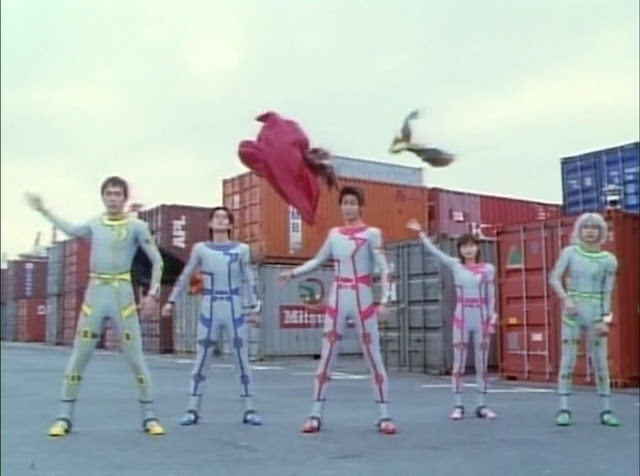 Despite that and the dated CG henshin sequence, the fight scene isn't bad, but really short. TimeRed gets into a scrap but accidently breaks off the seal placed on all frozen inmates causing him to grow. We are actually given an explanation for this. It is a "rebound" or recoil from the freeze compression that the seal was used to suppress. As a giant, Jecker begins blasting up the city as Tac tries desperately to request assistance from HQ. Eventually, he gets a response, the five Time Jets are launched, and we are finally ready for our first giant robot fight. 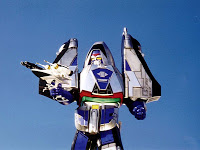 3D Formation TimeRobo is the name of this one with two forms; a blue one called Beta and a Red one called Alpha. Beta has a gun and Alpha has a sword and shield. Pretty simple designs overall, it is interesting to see two different Mechs formed from the same 5 "zords" especially this early in the season. I also really like how the information can basically be downloaded into their brains from their helmets visors, although it is very plot convenient. The fight pretty much exists to show off all of the signature moves of Timerobo, there is even a matrix parody in the middle of it. Tiss the era I suppose. Well, they defeat and re freeze Jecker earning their first victory. The money is returned to Asami's father with a not simply saying "I win" on it and it ends with Asami giving them a place to live with only Sion showing any gratitude. Before cutting to credits, Tac reminds the audience that it is unknown who approved Timerobo for launch.

Overall, this episode was much better than the first. This actually isn't the first time in my life I've attempted to watch timeranger but that sour first episode dissuaded me. However, this episode had the opposite effect as it actually showed off how likable a character Tatsuya Asami really is. Granted, the other four timerangers didn't get much from this episode other than their typecast responses, but this was clearly meant to focus on Asami. The fight scenes were really short and mainly served as introductions, but the overall writing was very well done. There were a lot of dated effects and references, but I won't fault it for being a product of its time. Overall, episode 2 had a slow start but a great middle and ending, making me look forward to episode 3. 4/5
Posted by Cendoo at 3:00 AM