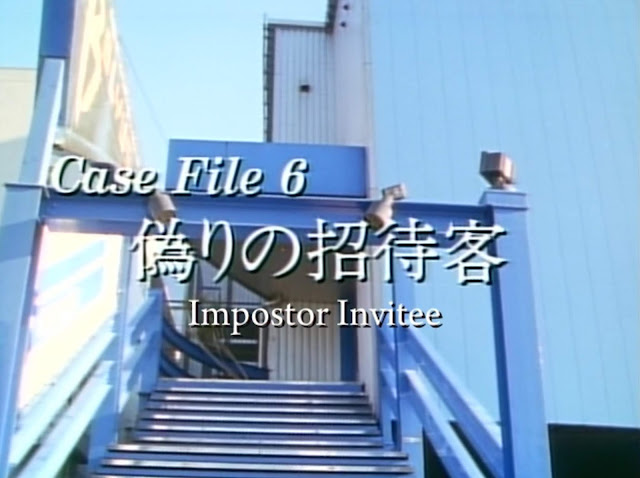 Time for episode 6. The fabricated invitee, what on Earth could that mean? Last episodes preview showed that this episode is mainly about Tatsuya and his father. I wonder how this will hold up compared to Wes and Mr. Collins. On a side note, I would also like to remind that the pink haired women among the villains has a name that could be translated as Lila or Lira, I'll be using Lila. 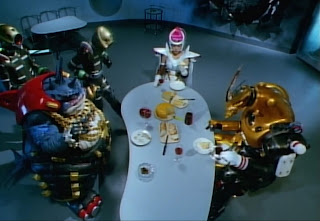 The episode begins simply enough with the main villains sitting down at the diner table. They begin talking about their concerns over not being able to get any money if the Timeranger's keep winning. This doesn't really go anywhere though because the subject is instantly shifted to the new prisoner Lila has thawed out. This new prisoner is a known jewel thief named Rouge. 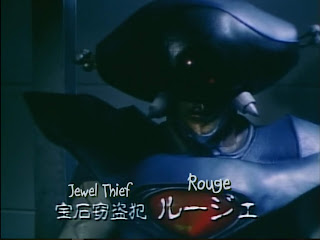 No, not the bat sadly but this interesting looking cyclops women is this episodes villain of the week. She has the ability to walk through people, take on their physical appearance, then leave them frozen in place. So, a villain who disguises themselves as humans and does bad things with their face using their positions of power and framing said innocent person. Never heard that story before right? Well, that is exactly what she does here; steals the form of a store manager lady and walks back into her store.

Cutting back to the Timerangers, Domon is complaining about their food always being the same due to low funds. He bugs Tatsuya to use his families riches to do something about it but Tatsuya boldly states he has cut all ties with his family. I give the guy some credit, it is not easy to walk away from fortune. Meanwhile, on the news they learn about the "word-famous diamond" called Moon King was stolen showing security footage of the impersonated manager from earlier. Interestingly, the news channel actually knows the women was being impersonated which is different from the predicted route. Personally, I am glad this didn't turn into a framed and needs to be proven innocent story; not that predicable thankfully.

Tac is immediately able to figure out that Rouge must be the culprit and brings up her file. Tatsuya makes a comment about even petty thieves get frozen to which Yuri explains is part of a 3 strike system. That is pretty extreme. It was explained in the last episode that being frozen like that leaves you unable to move but still have a half working mind which sounds like unbelievable torture. Come to think of it, shouldn't some of these criminals be hesitant to go back to crime with the fear of being frozen again? Then again, do escaped criminals ever show remorse? If anything, this should cause them to develop huge claustrophobia.

Getting back on topic, turns out Rouge can only impersonate women and has a bird-shaped birthmark on her neck which always shows. This is all the proof they need and begin to plan how to deal with her. 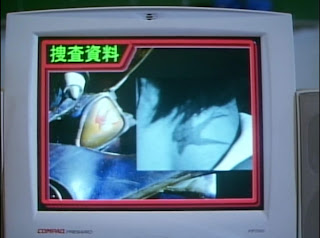 Rouge gives the necklace to Lila out of gratitude for unfreezing her. She then hints at her next goal which (as predicted by the Timeranger after a quick cut back to them) is the Moon Queen, the twin diamond of the stolen necklace worth just as much. This gem was purchases by the wife of the president of New Japan Shipping who plans to unveil it at a ship party that same afternoon. Man the convenient writing is just all of the place for this episode. Yuri has the plan to use Tatsuya's father's influence to become attendees of this party but he still wants nothing to do with him. Despite that, the others insist saying to leave personal feelings out of work and there is no better way basically leaving him with no choice. 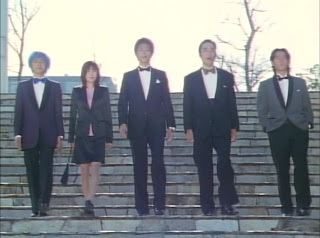 It is time for action, everyone is dressed up for the occasion and their plan works. By mentioning Tatsuya's family name Asami, the guards let them into the party and say they will let the president (his Dad) know. Tatsuya already knows an uncomfortable reunion with his father is awaking and looks very nervous. Things don't get easier on him, as soon as they walk in he is instantly recognized and everyone crowds around him with excitement over him attending. A friendly bi-standard informs the 4 confused Timerangers of just how much of a big deal his father and his Asami Group is in the world of both politics and business.

Well, with Tatsuya left to guard the diamond, the other 4 begin walking around the party looking for a women with a bird-shaped birthmark on her neck. This episode just took a cliche secret agent turn, music and all. Well, we get to see them walking around looking like creeps for a few scenes until Rouge ends up attacking a women in the restroom as she somehow managed to sneak into a stall still in her monster form. Regardless, she manages to sneak past the timerangers for various convenient reasons when Tatsuya's father shows up.

While regrouping with the other Timerangers, Sion takes notice of the one women he failed to inspect who is in fact Rouge. Yuri remembers seeing her but she didn't have a scarf on unlike now and decides they should check it out. Unfortunately, they get spotted by Tatsuya's parents. His mom is excited to see him, his dad has some questions and does not look so happy. The other 4 leave him to there and go after Rouge.

Rouge is about to make her attack but the Timerangers interrupt just in time. Sion spills something on her, giving them an excuse to just under the scarf revealing the birthmark and then they drag her away. Why nobody said or did anything as they watched a women get dragged off kicking and screaming is bit odd. Either way, Rouge makes a run for it, somehow ending up in a harbor, where she is cornered and now the battle can begin. 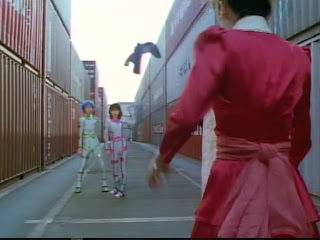 I know they were on a boat party but how the chase got from there to here still didn't make a lot of sense. My only guess is that the Timerangers let her get this far away in order to keep the battle away from people. It is a small detail but the little things can ruin the bigger picture.

Just as that begins it cuts back to Tatsuya who is getting a lecture from his dad. This isn't just some angry father mad about his son being immature though it gets pretty serious. Basically, he states that no matter what he does people will always see him as an Asami, not just Tatsuya and that he cannot just walk away from his pre-determined path in life. Asami-san gives him one last chance to return to the family, offering to turn a blind-eye. Tatsuya, who has been too shaken up with emotion to speak much until now, chases after him and says the he knows the name follows him everywhere but it determined to change his path. He then rushes out of the party and announces to the guests who again tried to crowd him that he is no longer an Asami, apologizes and gives them a business card for Tomorrow Research. With that drama wrapped up, he rushes off to join the others. His father watches him run and reveals he used to have the same mindset before realizing he could never escape the Asami name.

That was a powerful scene. Easily enough to make the episode. I can see this story line was kept for for Time Force with Wes wanting to control his own future but it is a little different here. Mr. Collins always felt like he cared about Wes even when he was trying to control him, like he just thought his way was best for him. Here, it was almost like Asami-san  was telling him he has no choice and that he should just go with it because there is no escape. It wasn't that he doesn't care about about Tatsuya, but that he knows from experience that leaving the Asami name is near impossible. A little bit of a harder situation to stand up against.

Now, finally the ranger battle. Surprisingly Rouge is making them struggle. I guess in the year 3000 jewel thieves have more fight in them than assassins. She fights while talking like a spoiled brat, the rangers start to get hits on her then Domon accidentally blasts her seal off causing her to turn giant. That is really a lame way to escalate a battle, but it was a little funny. Rouge hates being giant and throws a tantrum, which I'll admit is a first. Well it is Timerobo time. 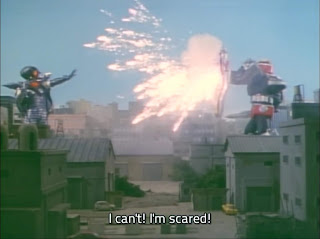 I noticed they are still showing the entire extended sequence of the mechs arriving and combining when normally by now it is cut down to save time for the fight. Well, I know why this is, there is no fight. As it begins, Rouge is still upset about being turned giant and is talked into surrendering. I wish I was joking. They apologize and assure her that by going back to freeze compression and finishing her sentence they will return to normal. The only attack thrown is one out of fear from the pain so Tatsuya has to do the finisher gently. Why did they even bother? Does Toei have a giant battle requirement for each episode?

The episode ends with some last minute emotions. Tatsuya's parent's see his business card and he has a few words with his team. Nothing really interesting other than a bit about his rental suit.

Not even sure what to say about that. I didn't like, most of it. The main villains only show up twice at the beginning and show little interest in what is going on. Story wise, it was mostly stock. However, the one thing I liked, which was really good, was Tatsuya's story. His exchange with his father was very engaging with his determination to change his fate and his father kind of understanding but thinking it is a futile effort. Powerful words were said, I could not do them justice. Sadly though, everything else was not interesting.They never even attempted to get the King Moon necklace back from the beginning, there were way to many convenient moments, and the fights left a lot to be desired. The ranger battle started to get decent but then it is cut short and the giant battle's instant surrender was easily one of the most pointless scenes I've ever seen in either Super Sentai or Power Rangers. Kind of feels like the writers only cared about Tatsuya and his tale with everything else was existing just to fill the time slot.