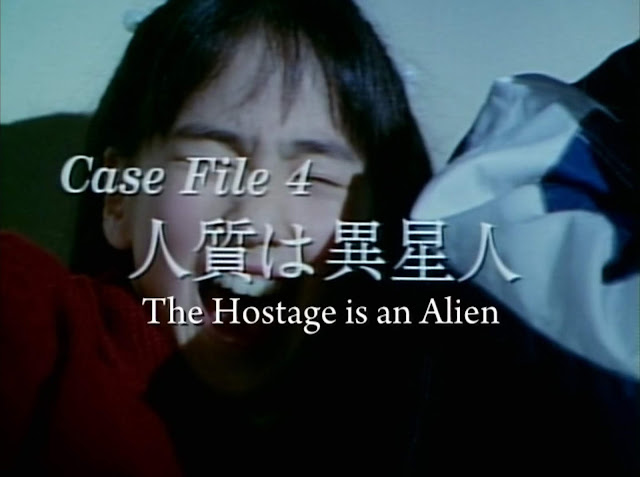 It's time for episode 4. Based on the preview this episode is going to be about Sion. (On a side note I know it is pronounced Shion but I my research results always show it spelled Sion.) Anyway, it is typical to give each ranger an episode early in a season so let's see how green was treated this time around. 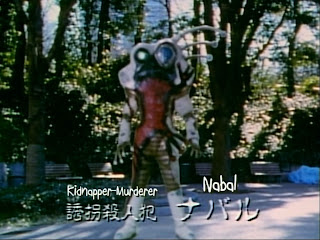 Directly to business this time it seems, almost instantly we see this weeks monsters, Nabal the Kidnapper-murderer de-frozen from a 200 year sentence. He has the ability to change into a human form where he kidnaps children and holds them for ransom, looks like we got a stranger danger episode in the making. After that introduction, it cuts back to the main villains hideout where they re-state their goals which is simply to live a life of luxury after stealing enough money. Come to think of it, every episode so far has involved money, I guess that is going to be the reoccurring theme of this season.

Going back to the Timerangers, Sion starting asking everyone if he can help them, don't really see why he suddenly feels like a burden after his gadgets and hacking have been big parts of previous episode plots. After getting turned away by everyone at home, he decides to go find Domon who is handing out ads for his self defense lessons (only to women) and ends up embarrassing him. I can see this is them trying to make Sion seem more alien as he takes everything Domon says at very literal value. Well, Sion's eagerness to help backfires on him as he ends up getting kidnapped himself by Nabal.

Back at base, the Timerangers get a call for Sion's ransom only just after figuring out the kidnapper is part of the Londar Family.Luckily he didn't know he was a Timranger so after leaving them alone, Sion was able to call the others for help only to get yelled at by Domon who said it was his fault and that his clumsiness only brings them trouble, harsh. At least now we get to learn a bit of his backstory as the Timerangers talk about him while tracking his Chrono changer.

Sion is a species known as Hubbardian, famous for his intelligence. Basically, a super genius with no social skills, is that a parody of bookworms? While hearing this, Tatsuya is shocked to learn that aliens are real between him and the monsters they've been fighting. Bit of a late response to that news I gotta say. Anyway, his people came from the planet Huddard that was destroyed by war in 2984 with him escaping in an escape pod and is the only known survivor. Totally not Goku or Superman. Sion also grew up in a laboratory as a test subject surrounded only by adults before eventually escaping, also sounds familiar.

Everything starts coming together, after hearing that the Timerangers were Sion's first friends they all rush out to save him. Back at the captive area, Sion managed to help the other captured children escape but doesn't morph in fear of giving away Tomorrow Research's location. Well, he gets a beating but the others show up just in time to save him, even Domon has some make up words, "if you die it will be even more trouble." I guess that's as close to an apology as he will give, but it is enough. Finally time for the fight. 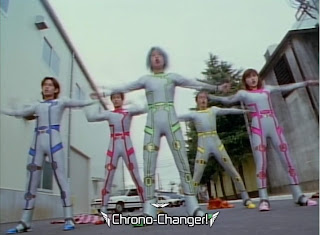 Green get's to stand center this time. To bad he looks the worst during the CG morphing sequence due to his dyed hair not looking right. Well, despite this episode mainly being about green, Timeyellow takes center stage in this right. He decides to fight him alone, giving Sion the first lesson in his martial arts classes, and fights him mainly with punches showing off his great physical strength.

Timegreen does get a few sword slices in though and gets to deliver the finisher. Although it looked like a finishing blow it was not the end of this conflict yet.

Nabal blows up, then stands up, and they attempt to freeze him with the bazooka but he rips off his patch before that happens for the obligatory giant robot fight. Boy, was this fight basic, almost felt like a check list. Start in Alpha, shoot him a bit, get hit, switch to Beta, cut a few times, then the finisher earning them another re-captured criminal.

The episode ends with Domon treating Sion's wounds while Tatsuya comments saying that he doesn't look alien except for the hair he thought was dyed. It is dyed, he thinks it's cool and has been dying it since he was 3, and that is supposed to be alien like behavior I guess.

This episode was very stock. The alien plot line is not original and the fight scenes were too short and one sided again. But, I will say that one thing it did better than episode 3 was pacing. Everything was moving quicker and not dragged out, made it much easier to follow along. However, this was another episode with a singular purpose, to give one ranger some backstory, which is fine but it was re used backstory very similar to Superman and other figures. So, next time will be pink's character episode then maybe yellows and then finally we can get to more interesting content. Hopefully. 3/5
Posted by Cendoo at 9:02 PM