I tend to be something of a snob when it comes to the anime I watch. I enjoy watching them, but many animes require such a massive time commitment (see One Piece) that is often impossible to motivate myself to commit to it.

In order to get around this, I actually rely on the opinions and reviews of individuals like Glass Reflection, Mother's Basement, and Anime America to give me a jumping-off point. And it was from these two channels that I was introduced to what has easily become not only among my favorite anime of all time but among the most emotionally and technically complex anime, I have ever had the joy to experience.

Based on the light novel by Kana Akatsuki and developed by Kyoto Animation, Violet Evergarden is, without any doubt in my mind, a masterpiece of the highest order.

In this Victorian-inspired steampunk world, most people can read, but not write. In this world, letters tend to be written by ghostwriters, known as Auto Memory Dolls, who use their talents for writing to express not only the words of their clients but the emotions behind them.

We are then introduced to Violet Evergarden, a former child soldier who, following the end of a long war, is recruited by an Auto Memory Company ran by her commanding officer's best friend. Though Violet is incredibly proficient at typing and the physical writing of letters, her life of near-constant warfare and following orders has given her an almost mechanical approach to life, with the emotions behind words often lost to her.

As such, Violet Evergarden takes it upon herself as an Auto Memory Doll to explore the emotion behind people's words, all in the hopes of truly understanding her commanding officer's final words to her, "I love you."

Violet Evergarden is a stunningly beautiful piece of animation; visually, audibly, and thematically, very few can compare. This wonderful story of a veteran's struggle to reintegrate into a society that doesn't understand them and come to terms with her own transgressions and failings is an emotional roller coaster that will make you equally cheer and weep for Violet's successes and shortfalls.

This anime may very well be the most beautifully animated anime that I ever watched. Nothing in my mind compares to sheer artistry that is on display. Whether in a still image or in motion, Kyoto Animation created a jaw-droppingly stunning piece of art with this one. Which is also incredible seeing as how most anime with amazing animation moments tend to be in action sequences (look at My Hero Academia), and Violet Evergarden, though possessing the occasional action sequence, is through 99% of the story, soft-spoken and dialog-driven.
Even the moments of violence and war are stunning in their brutal frankness. Violet Evergarden does not sugar-coat the nature and cost of war, and almost from the very first moment of the anime, you immediately identify with the struggles of every character in this world, especially with Violet herself, even if her particular situation is one that, thankfully, I have never had to experience personally.

The visual elements of Violet Evergarden are a triumph to behold and are an integral part of expressing the emotional depth of the overall piece.

As much as I love the animation of Violet Evergarden, I might love the soundtrack even more. I am serious when I say that this soundtrack may very well be one of my favorites to listen to, period. You can find Violet Evergarden: Automemories online on YouTube and listen to the entire OST, and I recommend that you do.

I honestly can't pick a favorite piece of music from the soundtrack, as all of it is so fundamentally tied to every other song and the animation in such a way that it creates a more unified and cohesive whole. I was listening to this soundtrack on its own as I wrote this and it stands as its own masterful work, thanks to the skills and talents of its composers: Evan Call, Shota Horie, Daisuke Kikuta, and Satomi Kawasaki. These four did a beautiful job and, if you don't mind me, I am going to keep listening for a bit before I continue my review.

In a story which is so reliant on the emotions of its players to function, the strength of each individual character must necessarily be strong in order to properly express what the story intends. If the characters are weak in a story like this, the story will intrinsically suffer (not all stories have such interconnectivity between character and story).

Thankfully, Violet Evergarden's characters are absolutely incredible. Violet herself is a deeply sympathetic individual, especially as we learn more about the world around her and how she relates to it. Despite her emotional reservations and lack of experience, you grow to understand how she views the world and truly mourn when she suffers for her knowledge.

But the side characters are equally amazing. All of Violet's co-workers have their own internal struggles and tragedies and we uncover them slowly as the series progresses and Violet herself comes to term with them. They are very down-to-earth and feel like real people with realistic flaws and dreams and you grow to feel for them almost as much as you do Violet, and that is absolutely wonderful for the story overall.

The basic rundown of an episode is that Violet is hired to ghostwrite for a specific character, she has some difficulty with the assignment directly tied to the personal issues of the client and how they relate to Violet's own experiences. Violet then assists them in coming to terms with their emotional baggage, oftentimes by completing her assignment, and this resolution helps advance Violet's own understanding a little bit more, which then ties back into her primary narrative. 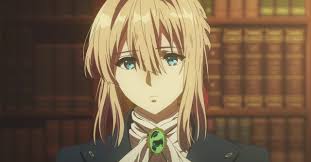 Violet Evergarden has a very easily consumable story. Most of the episodes follow a relatively uniform structure, with Violet's overarching narrative weaving its way throughout and tying all the standalone episodes together.

This structure makes the series very easy to digest, as mentioned earlier, and this really good as it can be very emotionally draining at some points (especially by Episode 7 & 8). I had to stop for a few days just to emotionally cope. This fact speaks highly in my opinion of a story, when it can invest me so much that I have to separate myself from it.

That being said, there is one minor thing. It is not an issue at all, just something to be made aware. Violet Evergarden is one of those anime's where the Three Episode Rule applies. The first two episodes set up the premise and the third develops the overall structure and tone. I recommend watching all three in a single sitting to prep you for the show as a whole.

I adore media that can get me to cry, as my own personal experiences have stunted that capacity for the most part. Crying does not come easily to me and it takes an incredible piece of work to enable me to do so. Violet Evergarden absolutely succeeds in getting me to cry both often and hard.

The struggles and tribulations of the characters are a beautiful exploration of the power of words and their capacity to both harm and heal. Every character in this story is broken in some way by the war, Violet most of all. But it is through her skill in writing and the relationships she develops as a result that enables her to overcome her emotional shortcomings and become a more whole and stable human being.

You can find Violet Evergarden on Netflix, it is an English dub but the English dub is incredible in its own right. Go watch it and I hope that it gives you the emotional catharsis that it gave me.