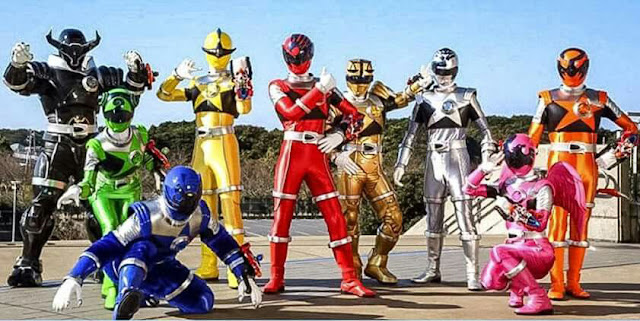 Time for the 41st Super Sentai. This time around, we have a space theme with 9 rangers to start with. Uchu Sentai Kyuranger or Space Squadron Kyu Ranger. With the stars as the limit, go ahead and click "read more" so we can see what this massive team has to offer.

The episode begins with kids playing at a park which is immediately interrupted by a huge CG invasion. 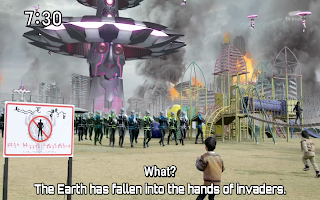 I totally wouldn't have noticed until that of the invasion point too.

Turns out, (as the narrator explains) the 88 constellations have all fallen under the rule of the main villains, Space Shogunate Jark Matter. So, the villains have already taken over and are being overthrown instead of stopped? That is actually a nice change of pace.

Wasting no time at all, 3 rangers show up in their mechs to save the day.

Green, yellow, and black, Hame, Shada, and Champ. They show up and show off the changers and henshin sequence. No wasting time! Except for this super excessive morphing sequence.

Shinobi Star- Chamaeleon Green - She laughs a lot and makes fun of people by saying their "too funny.

Food Meistar - Kajiki Yellow (get it?) He talks in cooking metaphores and puns.

The silliness aside, these are actually some pretty cool costumes. The space theme is very apparent and space is cool.

The first fight begins and it quickly shows off that their wrist changers double as blasters. What is with this tradition of the morphers being weapons? It is now that we get introduced to the supporting character. The Alpha if you will.

This lovely pink thing reminds them that their focus is on saving the civilians. Even though they weren't doing anything wrong that would warrant a call like this, it was just an excuse to give Raptor a line.

The episode then cuts away to Lucky, the soon to be red ranger, as he is motorbiking through space and listening to fortune teller radio.

A meteor shower occurs which causes Lucky to crash land on the same planet where the 3 rangers were fighting on right in the middle of the hoard of foot soldiers or Indavers. Get it? Invaders...

The red rangers name and catchphrase is "Lucky" and I can tell his re-occurring trait will be dumb lucky. This should be amusing.

Despite wrecking his bike, Lucky's allows the other rangers to rescue the civilians. Lucky watches the rangers and decides he is going to join them because he is impressed by their strength. Even doing a pose that accidentally hits a couple bad guys. Cut to intro! 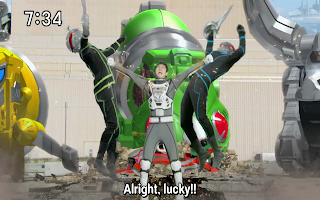 This guy is either going to annoy you or entertain you greatly. Me? I'm the latter.

One theme song later, Lucky finds himself on the Kyuranger's ship where Raptor fixed his vessel. Lucky states he is on a journey to see the edges of the galaxy and it seems he has only been lucky not to have been attacked by Jark Matter. Lucky lucky lucky. After some exposition, Raptor tells Lucky that their group, named Rebellion, is the only one fighting against Jark Matter to stop their conquest. That's a brilliant name...not.

This episode has taken a cheesy turn.

Basically, only 3 Kyurangers exist now and they need 9 but one must have a Kyutama to be a ranger. Lucky declares he is going to find one and be the 4th Kyuranger because when he wants to do something he always does, then he steals one of their Seiza Blasters and bolts off. I can see he isn't the humble type about his good luck.

Meanwhile, the villains main boss, The Emperor the Shogun, is revealed via hologram. 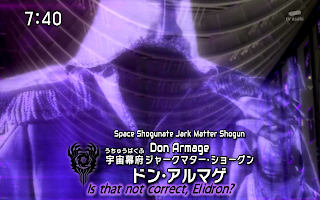 Don Armage, he is not happy about the Kyurangers interfering. Wait a minute, space rebels and his guy wanting to rule the universe? May the force be with the Kyurangers. 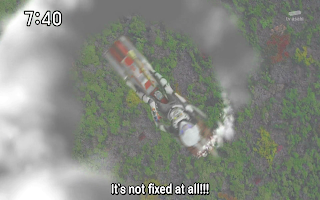 Once on the planet, Lucky actually finds the blue Kyutama, but it is already in the possession of a werewolf. This werewolf, whose name is Garou, attacks Lucky until the 3 Kyurangers arrive to save him. 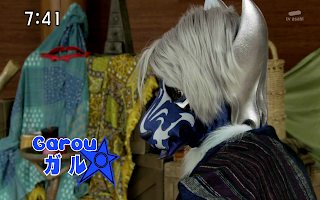 Garou's Kyutama doesn't react so he cannot morph. He then states that no one which can defeat Jark Matters which prompts Lucky to call him weak and states that's why his Kyutama didn't choose him and the two get in another fight. While this is going on, a new threat from Jark Matters arrives to conquer eliminate the Kyurangers.


Elidron, a chief retainer. Before he does anything though, Garou is given some backstory. His entire species was wiped out trying to fight against Jark Matters which is why he thinks fighting them is fruitless.


Lucky shows no sympathy and says that this tragic event is just more reason for Garou to fight. He then turns around and wins his fight with Garou and says that since he is stronger than him and they will allies then Garou can fight without having any reserves. Lucky almost seemed like a jerk, but saved it at the end there. Naturally, with perfect timing, Jark Matter shows up for their attack.


The 3 current Kyurangers henshin (in a much shorter way this time) and engage in battle with a still powerless Lucky joining along. Jark Matter see Lucky and decide to make an example of him by throwing him into space. Brutal.


However, before dying, Lucky's determination to become a Kyuranger burns him back to life and another lucky miracle happens. 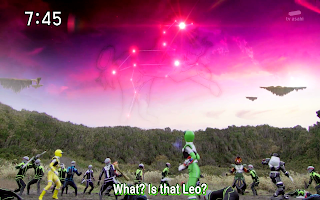 Come to think of it, Sentai Rangers always seem to have lucky miracles so this might be a way of the writers poking fun of that. Or, they are just really trying to sell the character trait of everything turning lucky for Lucky.

Through a series of CG meteors, the red Kyutama finds Lucky and he morphs while riding an asteroid back down to the planet which in turn causes a meteor shower to wipe out a chunk of the enemies. That is one heck of a hero entrance.

Another battle takes place showing off all the Kyu weapons. Which Lucky JUST KNEW how to summon and use. Red gets a sword, Yellow has a slaher, Black gets an axe, and Green gets a rapier. Those are 3 swords! They easily defeat the Indavers and show off a couple finishing moves. However, the Kyurangers ship gets under attack, so, Hame and Shada summon their zords to go help out with Lucky disovering his to join them. It is still nice to see some individual zords fighting. Lucky's mech, or voyager, is bigger than the others. 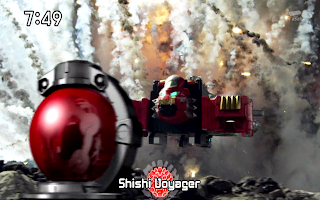 Okay, we get it. He has good luck.

While this epic space battle is going on, Champ is left alone fighting off the Indavers, and all of these events happening at once have re-awakened Garou's desire to fight. So, the blue KyuTama awakens and Garou takes one of the Seiza Blasters which allows him to become Ookami Blue. Why did they bring extra Seiza Blasters with them?


Five down four to go. That's one fuzzy costume

Garou and Champ finish off the Indavers while Lucky initiates a combination sequence with Hame and Shada. The two more experience Kyurangers said they didn't know about combinations. How did Lucky know? 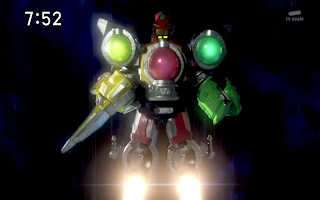 A legless combination. Were you ever that kid that didn't have all 5 toys and improvised like me? Finally, a season that gets us.

This legless combination doesn't last long. The Kyurangers get knocked out of the sky and almost crash land on a heavy winter planet but are saved by the black and blue zords to finally form the completed Kyuren-Oh. 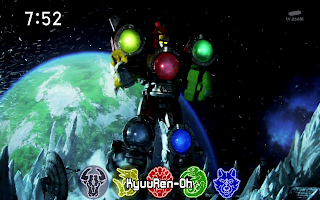 I question if having lets is really more efficient then having jets. Each one of those spheres is a cockpit, they don't share. It is nice to see rangers have more obvious roles when piloting but that has really got to make the limb pilots motion sick.

With only a few minutes left for the run time, the giant battle is pretty short and mainly exists to show off KyuRen-Oh's move set. Monster goes boom, and the episode ends with Lucky and Garou being welcomed into Rebellion aboard the Kyuranger's ship which is revealed to be named ORION. Finally, the other 4 Kyurangers are used as teaser to keep watching this season. THE END!

This episode had some note worthy problems, but was still pretty good. The Star Wars parallels are very apparent, Lucky's good luck is a pretty obvious excuse for plot convenience and the Green, Black, and Yellow Kyurangers came off as very one dimensional charters due to the focus being on Garou and Lucky. Despite that, it was still very impressive how much content they managed to squeeze into the first episode. There was plenty of action, the multiple planets/outer space theme is a welcome change, and these diverse characters show a lot of promise for development. Overall, it has peaked my interest, and that is the ultimate goal of a beginning. 4/5
Posted by Cendoo at 8:12 PM