Previously in the Kaiser Sensei Piko Parade Saga, I reviewed Hostage: Rescue Mission.  You can read what I had to say about that in my review. (Link found in article.)  Now we shift into the realm of bloody sci-fi action with another review of a retro game released by Piko Interactive.  This is Alien Rampage.  (Click on "Read More" to read the full review.) 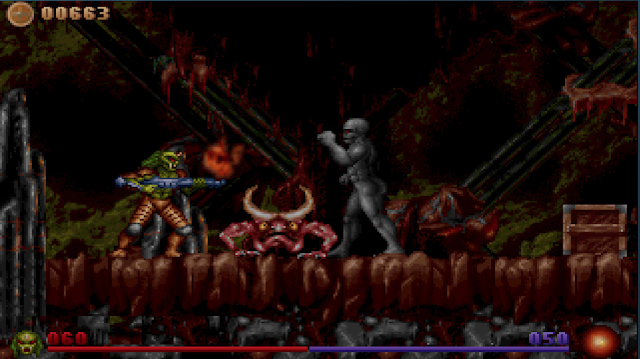 The story is pretty thin and very, very, veeeerrrryyyyy, very, dumb.  How dumb could it be?  You are playing as a green dude.  He crashes his ship on to a planet and swears revenge on the evil aliens that shot him down.  Did I mention that he swore revenge on the entire alien race and not just the aliens that shot him down?  Yup, he is that f*****g angry.

That's an interesting start to a story, but sadly that's all that there is to it.  I didn't like it!  There should've been more beef to the story even if it's just a tiny incy wincy little bit.  Then again, no one is playing this for the story, so it doesn't hurt the game at all. 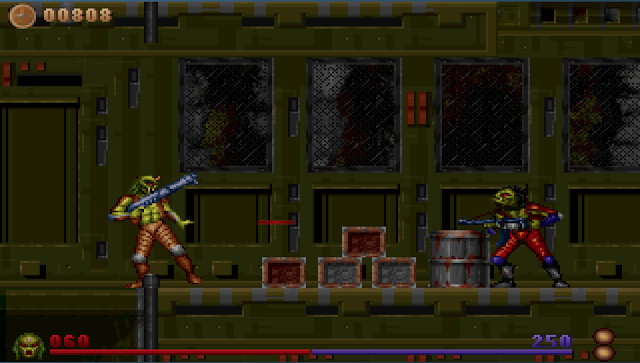 Alien Rampage takes the classic 2D run 'n gun platformer style found in the old Apogee and ID games, but pumped up to the extreme.  The goal is to explore large and dangerous levels and find the exit.  It doesn't sound that tough, but it gets pretty difficult.  Each level has challenges blocking your way.  Some levels will require you searching for keys, some will have you hitting a selection of switches in a certain order, while some require you to deal with deadly water traps.

The challenge is a fun one.  It is very satisfying completing a stage, especially with how chaotic the weapons are.  Do watch your ammo though, it can go very quickly.  You can find ammo or if you have enough money you can buy them from shops that are in each stage.  The way that our hero plays is a bit more interesting than a standard run n gunner platformer star. When I say a "bit" more, all I'm saying is that he can grab on to ledges.  This skill comes in handy... Uhh, no pun intended.  The controls are good in general; they are smooth and responsive.

This game does take a very weird turn when you reach episode two.  The game changes setting to a haunted castle full of bats, spirits and more evil aliens.  The puzzles also change to suit the spooky theme and there's even a new power up, where you get to change into a vampire bat.  The third episode has a sci-fi theme.  This makes more sense with the tone of the game. 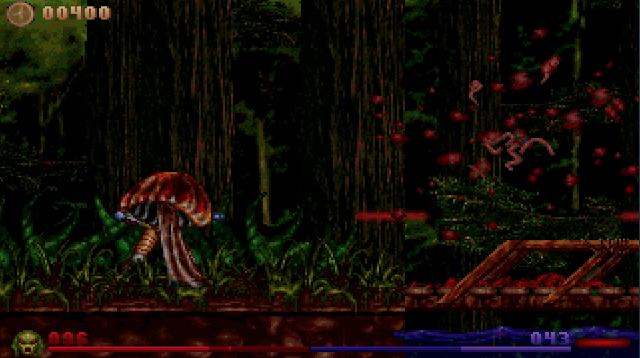 The graphics reek of 1996. With dark and gloomy coloring, hideous looking creatures, and a lot of pixelated gore.  You know what?  It's not half-bad.  It has a certain alternative hard rock charm to it.  It gives the game a very bad-ass attitude and atmosphere.  The main character does remind me of Archer from Small Soldiers, even though this was before that... Holy Pewterschmidt! Maybe this is where they got the inspiration to create the Gorgonite race! 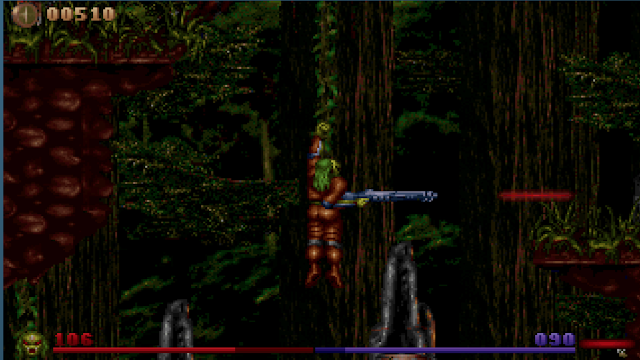 Sound has not aged well quality wise.  It is very muddy and cuts out due to it being so loud that it clips.  The music and sounds themselves are okay though and they help add on to the weird and violent atmosphere that is Alien Rampage. 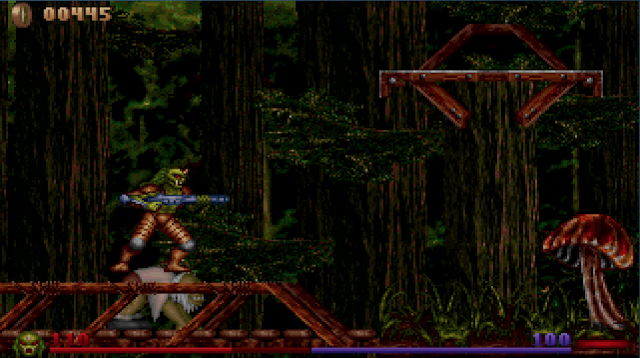 Overall, Alien Rampage is a little aged, but it is still a very decent retro game to experience.  If you love the old Commander Keen and Duke Nukem games, you'll get a kick out of this one.  Alien Rampage gets a solid 7 out of 10. 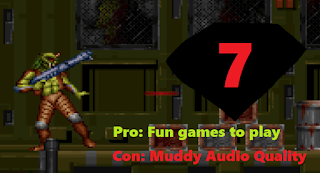