From the secret files of the Emerald Ranger Police comes a review of an old school police game from 1989.  This is Hostage: Rescue Mission.  (Click on "Read More" to read the full review.) 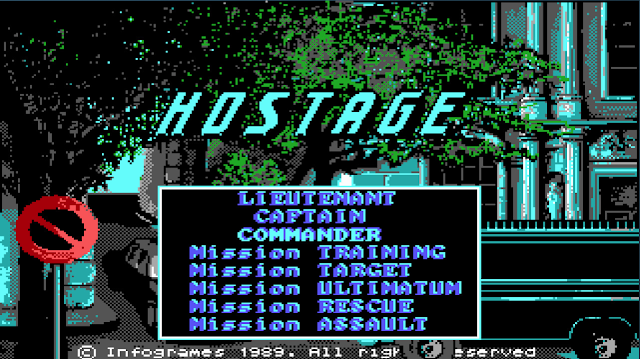 Danger! Danger! The embassy building has been taken over by evil gun wielding terrorist that are keeping hostages at bay.  It is up to the assault force to secure the building, neutralize the baddies, and rescue the hostages.  It's a classic action story ripped right from books, movies, and television shows, so why wouldn't that work here?  It creates an exciting and intense atmosphere that will put you on the edge of your seat. 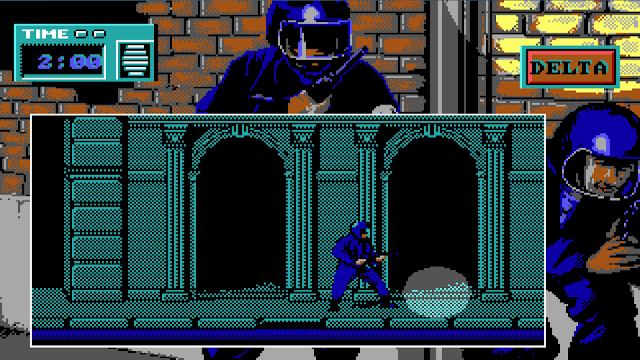 Gameplay is split up into sections, each requiring different skills.  First section is about hiding and dodging.  The goal is to get three snipers to certain locations, so they can watch over the embassy.  This section is a platformer where you run across the street.  You'll need to avoid spotlights, they are the terrorist keeping a look out and one moment in the spotlight will get you shot.  You can avoid them by running, crawling, rolling past them and you can also hide in certain buildings.  This section is okay but the controls could be a bit tighter, they have a slight delay in reaction.  It's a good thing that these officers can take quite a beating before falling on duty.

The controls for the climbing officers are a bit confusing at first.  You need to use the arrow keys and spacebar.  This sounds simple enough but it doesn't work how you'd expect it to.  The down key is to make the officer climb down (fair enough), but in order to climb up you'll need to press the right arrow key.  The up arrow key is used for the ropes breaks.  Spacebar will make the officer swing and this is when you need to press the left key.  It is used to get you into the window.  The timing for this is a little tricky at first, but it will feel natural after a short amount of time.

Last section is the assault team storming the building.  This is where the fun happens.  You get to shoot the baddies and rescue the hostages.  This section plays more like an old school dungeon crawler like Wizardry or Shining in the Darkness.  The perspective is in third person view (unlike Wizardry and Shining in the Darkness), you press the up key to move forward while using the left and right keys to turn.  Pressing the down key will turn the officer around.  This section is quite hard, even more so due to how aged the shooting is.

How do you shoot?  Well, you hold down the spacebar which is fine, however it becomes a little more frustrating after that.  There's no auto-aim in this game, so once the spacebar is held down, you use the arrow keys to aim your gun.  The shooting is sluggish, especially since the terrorist are very quick in shooting back.  They also have fantastic aim, so you need to master your aiming quickly because it's all about being quick or being dead.

Quite an interesting and ambitious concept, especially for a game that came out in the late 80s.  Is the gameplay still any good today as it was back then? Sadly, can't speak for the "back then" part as I never played it back in the day.  Heck, I wasn't even born when this game first came out.  I can however speak as someone who is playing this game with fresh eyes that haven't been blinded by nostalgia.  So, how do I feel about the gameplay?  Well, it's very rough around the edges but I did have some enjoyment with it.  It is a shame that there's nothing much more to this game other than what has been said.  Okay, there are different modes but they are just variations of the game with the baddies and hostages acting slightly different.

It does take some time to get used to the controls and how the game works.  I wasn't turned off by the learning curb though, it only made me more curious and determined to beat the game.  Sadly, once you have figured out the tactic to beating it, the game becomes super easy to the point of boredom.

There are two versions of this game included.  One is the black and white version which is an unplayable mess unless you have the password to get passed the copy protection.  Unless you still have the original instruction manual or know where to find it online, you're spoot out of luck.  It's odd to have a password problem to begin with.  This version doesn't even come with a digital copy of the manual.  Not the first time I've come across a problem like this with a Piko Interactive release.  This also happened with Mystical and it is handled much worst there.  (Check out my review just to see how bad it got.)  The other version is in color and you do not need to do any research to play it as it is cracked and runs without a password. 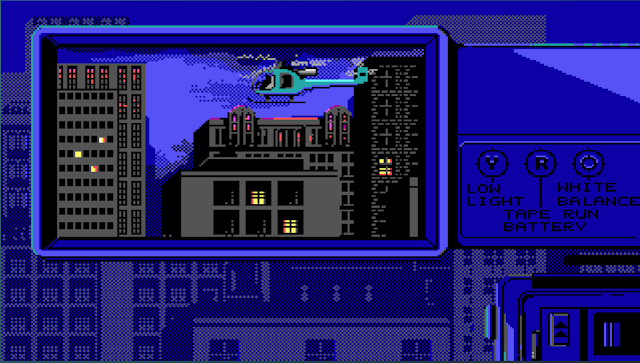 The graphics are pretty well detailed for a late 80s PC game.  I like the details found in the buildings and streets, but the chunky designed characters are laughable.  The graphics do flicker in some spots and it hurts the eyes.  The animation is okay. 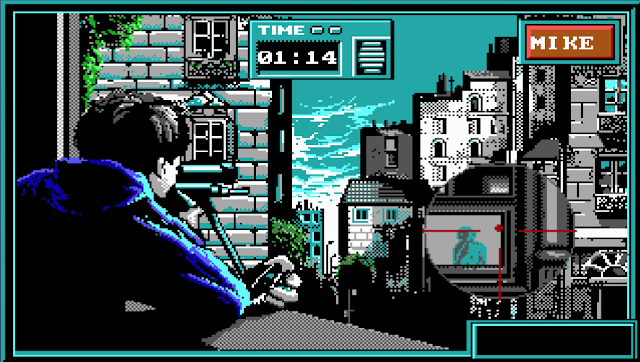 The sound in this game has aged poorly with it being nothing but bad ringing in your ears.  I do like retro soundtracks that are mainly bleeps and bloops, but this annoyed the ever loving stuffing out of me.  I just had to mute the game and put something better on.  If you want to keep your ears, you'll do the same thing. 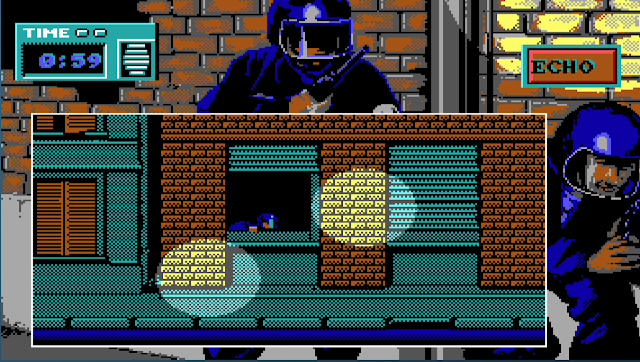 Overall, this is a very hard retro game to recommend due to how aged it is.  The hardcore retro gamer and gaming historians are the only gamers I see getting enjoyment from this relic.  (With extra emphasis on the word, "relic".)  I did find myself having fun with it, but I'm also a gamer that falls into that hardcore retro gamer and gaming historian niche.  Hostage: Rescue Mission gets a 6 out of 10. 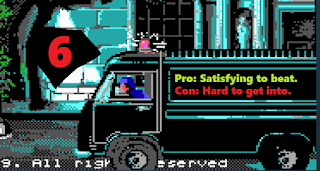 Mystical (as part of Kaisercade)
Alien Rampage
Dorke and Ymp