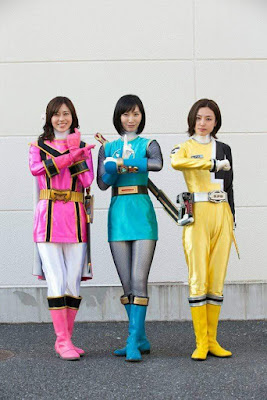 Well, this is an odd case. What we have here is a special for Mothers Day that was hyped up to be a spin off series staring 3 past female Sentai actresses reprising their role and trying to juggling being a hero and a mother. Unfortunately, only one episode was made and it was just used to promote a Kyuranger movie, Uchu Sentai Kyuranger vs. Space Squad. Well, let's click "read more" and see what this one off had to offer.

The "episode" starts off with the villain, Space Nin Demost, developing a new ninjutsu or ninpou while a narrator give him backstory. Demost is one of 12 "apostles of The Genmakuu Society". Whatever that is. His new ninpou will summon insects that devour everything and he plans on using Earth to test them. 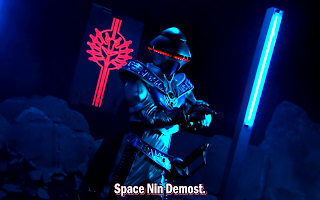 It is at this point that the narrator introduces the 3 mama Sentai heroes while some stock footage from their respective seasons play. Nanami - HurricaneBlue, (maiden name) Marika Reimon (maiden name) - DekaYellow,, also nicknamed Jasmine, and Houka Ozu - MagiPink (maiden name). A ninja, a cop, and a mage. Were they only picked because they have 3 different colors? 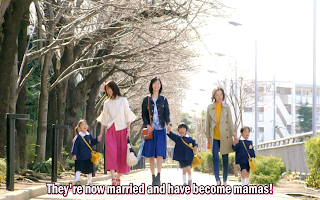 Good to see dressing color coded never dies. Also, looks like all their kids are the same age.

The narrator says they will save the story of how they met their husbands for another time. LIAR! Next, the three Mamas drop their kids off at school and give themselves an introduction.

All three bodly claim that they protect the Earth and their families while being sparkling mamas who never look tired, only for the kid's teacher, Hiroto-Sensei, to show up and say they all look tired. What a jerk.

They're supposed to be married women but they all kind of fawn over the male teacher and I don't know how to feel about that.

The girls grab tea together and talk about the difficulties of being both a mother and hero. They mention things like changing a diaper in a Zord, letting the baby play with their weapons, and needing to breastfeed during battle. 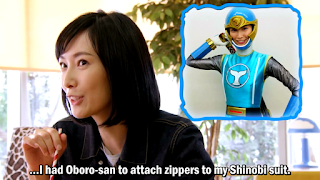 I'm liking how seriously they are taking these roles.

All 3 girls having a mutual desire to hear Hiroto say they are "always sparkling", but they don't have time to treat themselves to things like yoga or a beauty parlor, so Nanami gets the idea for "time saving techniques. Save time on chores and use that time to work on themselves. What?


What is going on?

While all that thrilling activity is going on, Demost begins to launch his insect invasion.

Back to the cafe' with the 3 rangers, they go over ways to save time in both their daily lives and ranger battles. These methods including getting the husband to do some chores, to skipping role call in battle or making Dekamaster fight, among other things. I'm glad someone finally said the roll call was a waste of time. Just in time, as a Dekaranger emergency call is made. 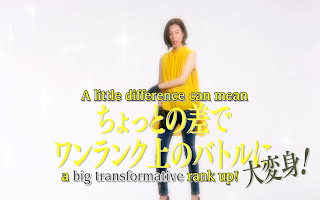 Sadly, this plan fails, Jasmine returns later than normal because Umeko got mad at Jasmine tried to skip her turn and they had to start the roll call over. Also, Dekamaster was on vacation. The whole Dekaranger fight happened off screen.

Nanami  gets another idea, doing chores while fighting. Weren't they already trying that? 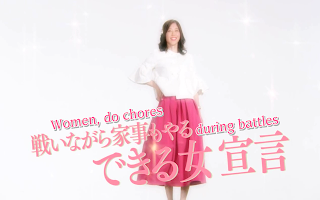 This is a terrible idea!

The mama rangers talk about chores they do at the same time and decide to try and apply the same thing to battle. Just then, Houka gets an emergency call for another off screen battle.

Trying to do chores while battles was hopeless. Houka tried to sew while the other rangers were doing roll call but pricked herself, tried to iron a shirt with their Megazord but got monster guts all over it, and tried to cook a fish with the roll call explosion, but burnt it because of the napalm. Those explosions behind them are napalm explosions!? 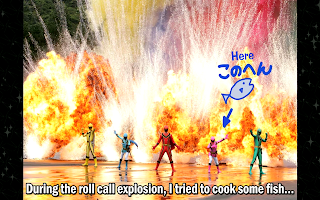 So obviously a stock image it is not even widescreen. I get the joke about a low budget, but even I could have edited in a fish on a stick.

At this point, Nanami has broken down in tears at all their ideas failing. But, with only 30 minutes till school is out, they decide to do their face makeup to at least be partly sparkling. They spent an entire school day in that cafe' and are trying to give each other time management advice?

Finally, Demost's insect invasion has begun. The 3 mama rangers see the oncoming attack and are about to try time saving once again. However, Jasmine insist that they don't use any time saving techniques and fight this battle with no cheap tricks. Was that a fourth wall joke? Jasmine states that time saving like the way they've tried is not possible and that their jobs as heroes is not to be sparkling mamas, but to protect the Earth and their families. With a new vote of confidence, the three of them rush off, henshin, and prepare to face the off-screen enemies.

Then, the announcer says they are cutting the fight to save time. Thus, they skip to post battle Demost. Whoever wrote that joke needs to be slapped. Demost can no longer sense his mechanical insects. 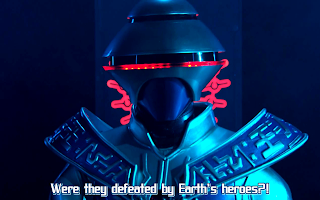 Demost doesn't care about this defeat though because he has another scheme. Finally, the narrator says to learn what this scheme is you need to watch the next upcoming movie (at the time) which is Uchu Sentai Kyuranger vs. Space Squad. And, that's another slap.

The "episode" ends with the 3 mamas picking up their kids late and being extra tired from the "battle". However, all three kids tell them they are sparkling because they work so hard as heroes. 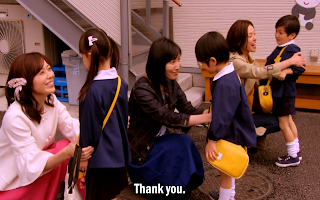 Finally, the narrator says that all working moms shouldn't worry about being tired because working hard as a mom makes them sparkle. The End!

I don't think I have ever been quite this unsure of myself after watching anything Super Sentai related. Obviously, this was meant as a budget joke project with an honest message at the end. Too its credit, there was some pretty cleaver writing, mainly when they poked fun of their own tropes. Granted, there were some glaring issues, mainly the low budget (even with the episode poking fun of it) and the bazaar desire to hear the teacher call the moms "sparkling". However, it is really sad because this actually was a good idea for a spin-off series. Trying to balance mother hood with being a super hero is admittedly not an original concept, but it still would have been interesting to see Toei's take on it. A year has gone by and a second Mothers Day has come and gone and there is no sign of a second episode so we may never hear how they met their husbands. Truly a waste.

The strangest thing is, I'm not entirely sure who this was targeted at. I know it was meant to promote the Kyuranger movie, but the writing would have been more appealing to Moms, not the kids who would want to see Kyuranger. Overall, this is a strange piece of Super Sentai history that cannot really be recommend for more than morbid curiosity; but at the same time, it was a special kind of enjoyably bad that one has to see to believe. 3/5
Posted by Cendoo at 12:00 AM