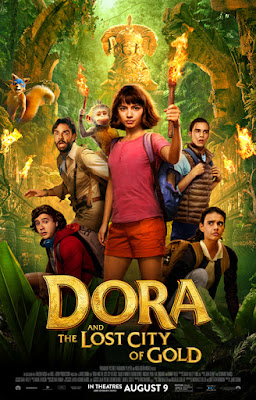 So I watched two special double length episodes of Dora the Explorer before going to see the movie Dora and the Lost City of Gold, and I was going to see this movie regardless of the reception since I found it absolutely absurd that Nickelodeon wanted to replicate the videos that CollageHumor made with Ariel Winter that made fun of the idea of a more mature live action Dora the Explorer movie being made.  I was going to see it anyway and I know I would like it ironically just because of those CollageHumor videos and also AOK’s Dora the Grown Up videos, but what I was NOT expecting was the movie to get GOOD REVIEWS and even more so, it’s CERTIFIED FRESH on Rotten Tomatoes!  So I went into this movie even more unexpectedly due to it. (Click "Read More" for the full review.)

In the beginning of the film, it starts off paying it’s respect to the original show, but then it jumps us right into reality and a more realistic incarnation of Dora.  Boots still exists and he’s more like a real monkey as he doesn’t really talk, however, he is highly intelligent, so there is that.  This movie does start with some of the jokes I saw in both the CollageHumor and AOK videos which for Nickelodeon to actually do themselves was kind of cute, but they didn’t take it to massive adult extremes either.  We then jump to 10 years later and Dora is now a teen and still exploring with Boots, but then her parents who are going on an expedition a lost Inca city of gold decide it’s best Dora moves into the city and tries to live a normal life with other kids her age, so she moves in with her cousin Diego who unlike Dora herself who still mostly remains the same cheerful and kind hearted girl she’s been since she’s been little, Diego has become more grounded in reality due to now growing up in it.

Admittedly, the first half or third of this movie is more of less what I would see as making fun of Dora’s little kid nature like AOK and CollageHumor did and I laughed at it there on a more ironic note, but once we got to the jungle parts of this movie, then things got a lot better in terms of being a legit movie and not just making fun of Dora The Explorer as little kid fare.  Here, we saw Dora as a more competent explorer and really got to see how an older and even more realistic Dora can work to a fair degree.  Dora is still kind hearted, she’s still resourceful and intelligent, but it’s treated much more like a legit family adventure movie in the same vain as something like DuckTales or Indiana Jones.  I would just even consider this a generic adventure movie due to that as it follows a lot of the tropes and cliches, but what makes it work and interesting for me is that this is Dora the Explorer and this is not really something we would see for Dora at all.  I mean, she’s in legit situations where she can be killed, and more then that, Dora ACKNOWLEDGES she can die.

One thing I will spoil that wasn’t in the trailers, Dora actually sings a song in this movie about pooping.  I am dead serious, and it was pretty funny to me.  So now that we have poop humor in here, we can officially acknowledge this movie as a Nickelodeon film.

One thing I really like about this movie for being official in contrast to the CollageHumor videos or the AOK videos, Dora here is still true to her character in the show where as in the other fan made ones, she did detract from it.  Thanks to that, it helped the movie maintain a lot of heart, especially as it did focus on Dora as a protagonist and do a good job making her the hero.  Dora inspired, she brought out the good in others, but while she did maintain some child like innocence, she was mature enough in the jungle to show how from her character was in the show, she develops well. 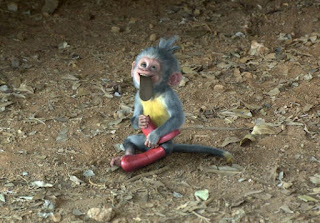 Elements from the show that were keep was definitely exploring and reaching a destination to complete a task, Boots is in this movie, and if anyone is wondering why Boots doesn’t wear his boots, an explanation is given early on in the film, but I won’t spoil what.  We do also have Swiper, and we have one special moment that you should really enjoy when a certain part happens.  I also recommend staying to the end of the credits for one minor special bonus.  There are a few other things, but I don’t want to spoil much.  The movie also does maintain it’s bilingual nature of using both English and Spanish and teaching Spanish to it’s viewers, but it’s done in a more mature and sophisticated way then it was done on the original preschool animated series.

Now as I said, this has the cliches of a lot of these adventure movies and I saw a lot of things coming due to it, and there were a few moments where I feel things may have been a bit too convenient or rushed, but at the same time, considering this is based on a preschooler’s show and also considering this movie was made on a low budget, I can overlook some of these to a fair degree.  This also includes how much screen time Boots and Swiper also get since I get the cost of animating CGI characters into a live action setting on a low budget.  Regardless, Boots does get a lot of good moments and he was always a favorite for me (a monkey in boots, it’s so adorbs).  However, where in the show Boots is more cute, here, he’s more awesome and I love it.  But yeah, it sucks he didn’t get as much screen time in a way as well.  Sometimes where he was supposed to be with Dora, Diego, and the rest of their friends, I didn’t see him on screen and it did kind of bug me due to that.  Again, budget, but even so, if he’s supposed to be there, I feel I should still see him there.

Where the movie succeeds however, it is well structured for the most part unlike Shyamalan’s Avatar live action adaptation and the Michael Bay produced live action Ninja Turtles movies (Yes, this Dora movie is massively superior to THOSE live action Nickelodeon adaptations), and while cliche, it does have decent character development and Dora as I said was done quite well with that herself.  It also helps that the movie had some genuine good humor that did help make me laugh, and while some of it was based the absurdity of Dora being in something like this, there were some well thought out great jokes to go with it as well, which even includes the poop song bit… yes, I said that.  In terms of structure, something that came up earlier in the movie by either a character or something else would have significance later which is often how to structure something well: Set it up, then deliver it towards something worthwhile later.  Movie does also have some legit drama which I appreciate as well as some flaws for Dora and Diego as well as other characters to overcome or have to cope with which I do appreciate.

Overall, it was a genuinely fun movie to watch which seems to pretty much be aimed at adults who grew up on the show and for them to share with their kids who may be newer fans of the series, and it has material to appeal to both sides.  It has bumps here and there and it’s not anything amazing, but if you’re going simply as a fan of Dora and just want a fan time without looking to be blown away, you should find a good amount of enjoyment here as I did.  Even more then that, it’s surprisingly Nickelodeon’s best live action movie adaptation of one of their animated properties. 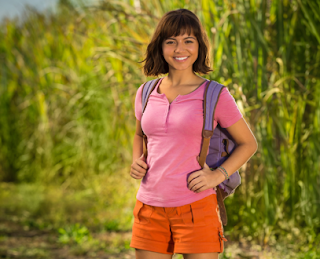