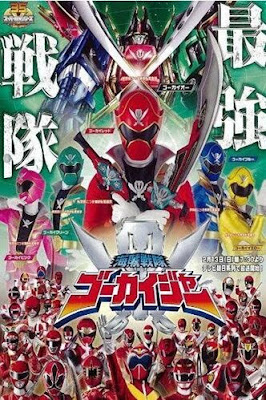 Red Diamond here with a different take on a season. The famous pirate season, one I actually have fond memories of watching when it was new and decided to re-visit it in hopes of feeling some of that goodness again. Was that just warm fuzzy nostalgia and this season is actually terrible? Click "read more" and we shall find out.

The episode begins in the craziest way, the space empire Zangyack has gone on a full fledged Earth invasion and an army consisting of the past 34 Super Sentai teams (minus a few extra rangers) appears to confront them.

That is one heck of a way to grab the audiences attention.

This massive battle, known as the Legendary Great War, is not long, but shows off a good number of the team's fighting styles and even throws in one or two bits of fan service like when the two ninja themed teams use a joint attack. Ultimately, the rangers take out the Zangyack on the ground, but in order to deal with the fleet of ships, Akarenger says they need to combine all Super Sentai powers which results in one giant explosion wiping out the fleet. Too bad they didn't have giant robots for that.

That was one heck of a surprise to see for the first time. Almost makes you worry that the season peaked in the first 2 minutes.

Post battle, the final attack caused all 34 teams to lose their powers because the blast scattered them all over the galaxy. 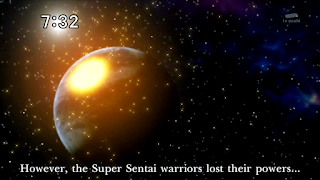 A short time skip happens, and we get to see aboard the Gokaiger's ship, the GokaiGalleon. In-between the war and their arrival, all of the previous Sentai powers were collected by them in the form of Ranger Keys. Their robot parrot, Navi, has detected that the "Galaxy's greatest treasure" is on Earth. 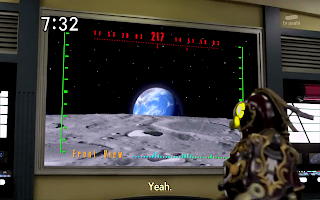 Yup, this is what brought the space pirates to Earth. Not to protect it, but to look for treasure.

The five Gokaigers all introduce each other in a way that is meant to sound like casual that. That classic writing cliche'.

Seems like the perfect time for the Ranger Roll Call 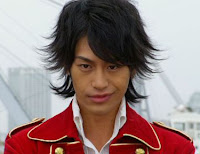 Captain Marvelous - Gokai Red. The reckless, carefree, and overconfident leader. Likes it when situations are dangerous or tricky because it makes them more "interesting". While always putting on a straight face and having a lot of pride, he cares a lot about his crew and always encourages them to play to their strengths. Prefers to fight with one gun and one sword.

Joe Gibken - Gokai Blue. Mr. Serious. Always the one to remind the others to stay focused on their main objective whatever it may be. Has a past in swordsmanship and has a lot of discipline as a result. Was once part of the enemies army. Prefers to fight with duel swords. 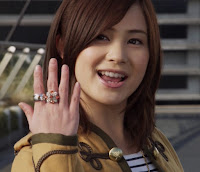 Luka Millfy - Gokai Yellow. The tomboyish girl who loves money and jewelry and will go to rather silly ways to obtain them. Excels at RECON due to constantly training her eyes by shooting and counting stars at night, has a talent for hustling, and often acts like a big sister to Ahim. She prefers to fight with duel swords like Joe. 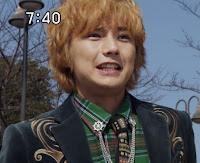 Don "Doc" Dogoier - Gokai Green. Nicknamed "Doc" or "Doctor" by the other crew. A ship's cook and the one who does all the cleaning and maintenance. Often depicted as being very nervous and timid. He has the lowest bounty out of all the Gokaigers to the point where even Zangyack don't see him as any threat. Despite his shortcoming, the crew always has faith in him even though they tease him a lot. Likes to fight with duel guns. 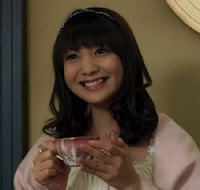 Ahim de Famille - Gokai Pink. Formally the princess of Planet Famille before her planet and family were destroyed by Zangyack. The girly girl of the group who is always smiling, saying polite things, and enjoys a quite cup of tea. Despite that, she is still a competent fighter and has an aggressive side. She almost never loses her cool, even when being kidnapped or making threats of violence, her calmness is always present. Likes to fight with duel guns like Doc.
6th ranger joins in episode 17.

These may seem like token personalities, but it is appropriate for the anniversary.

While on the way to Earth, the Gokaigers encounter a Zangyack fleet which whom they've been on the run from. Capt. Marvelous decides to fight through them because that is what pirates do. Cut to intro!

One theme song later, the Gokaigers wipe out the Zangyack fleet in an air battle. They use their ships cannons, crash right through enemy ships, and ultimately change into their Megazord GokaiOh and finish off Zangyack with some really dated CG. 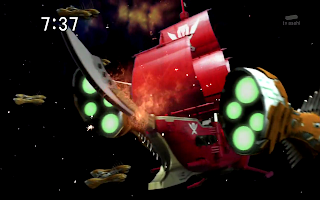 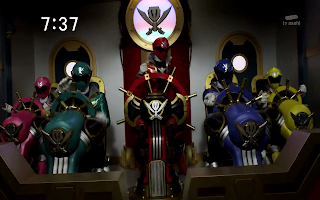 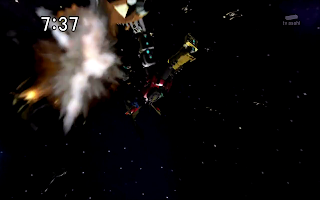 Dated effects aside, this has been a very strong episode so far. With this quick battle, their mechs and ranger suits have been quickly established without any exposition.

The Gokaigers finally arrive on Earth and attempt to get information about the great treasure from the Earthlings. Unfortunately for them, nobody knows anything. 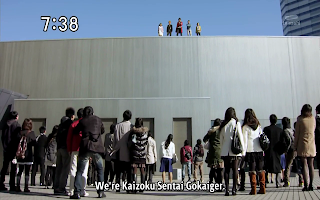 The people were only slightly surprised to see a giant pirate ship drop down and 5 aliens rope down from it. I guess after 35 years this stuff is pretty typical.

Unsure of what to do next, Capt. Marvelous decides it is time for a lunch break and makes Luka sell one of her rings to pay for it. I had to mention that. They're pirates but don't commit petty crimes like stealing food and there is actually mention of money.

Cutting away, the main villains are introduced. Zangyack has been firmly established at this point, but now we get to see the prince of Zangyack that is in charge of the fleet set to conquer Earth as Zangyacks second invasion. The Prince, Warz Gill, is accompanied by his Cyborg bodyguard Barizorg and the armies Technical officer, Insarn. You'd think at this point space empires would know that Earth is a trouble spot with a lot of resistance.

A spoiled brat leader, an emotionless cyborg, and a mad scientist lady. Totally not token.

Meanwhile, the Gokaigers are about to enjoy some curry for the first time, but that is interrupted by the Zangyack attack.

The captain does not like his meal time messed with.

Now, we get to see the monster of the week, Action Commander Shikabanen. I almost forgot about those.

The enemies theme being an empire probably made them easy to design. Just look alien and ready for battle.

The Gokaigers begin to return to their Galleon to think of what to do next, but Ahim stops when she notices some children being terrorized and one by one all of the pirates relate to when their own home planets were conquered. All 5 of them don't say many words, but their expressions tell you that they all have a rooted personal hatred for Zangyack beyond simply the call of justice like past teams.

Capt. Marvelous fires his GokaiGun at Shikabanen saving a civilian. Shikabanen calls them out for just being wanted pirates and gives them a chance to walk away while warning them of what happens to those who defy the Zangyack Empire. But, the pirates don't have already made up their mind, they GokaiChange or morph and go on the attack.

Time to break down the henshin! 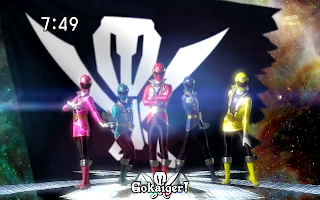 Just use the key and symbols fly at you to change. Nice and simple.

Capt. Marvelous says his catchphrase, "let's make this showy", and the battle begins. The fight is a lot of fun to watch. Every Gokaiger starts with 1 sword and 1 gun and they all show off good use of both while jumping/swinging around the environment. Eventually, they start swapping weapons around to fit everyone's preference. 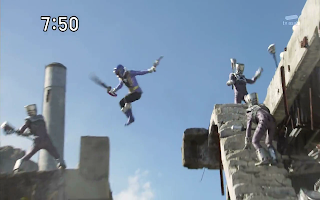 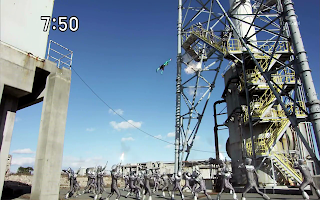 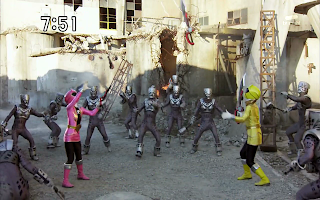 This is what the newer season have been missing. Actual enjoyable battles that look like difficult feat with enemies that fight back. Granted, the small fry don't put up much of a challenge, but at least they are swinging at the rangers.

A lot of the Zangyack are destroyed, but there numbers seem endless, so, the Gokaigers decide to show off their special ability. 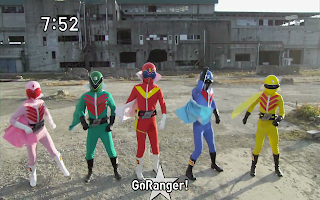 All 34 teams before them have lost their powers which now exist in the form of ranger keys. So, the Gokaigers now have the ability to GokaiChange into any past team and use their weapons and abilities. The old henshin sequences are even re-created. This was a huge shock and an ultimate form of fan service when it debuted.

The Gokaigers use the Gorenger's Hurricane ability, which is to kick a football around that turns into a garbage truck to suck up the enemies. Not stock footage. They re-created everything with the help of CG. 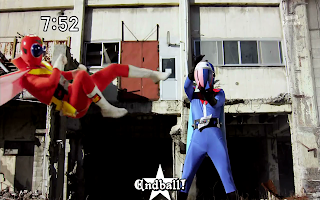 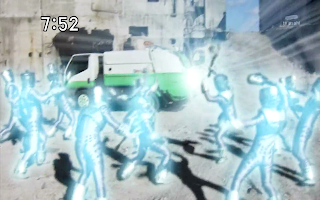 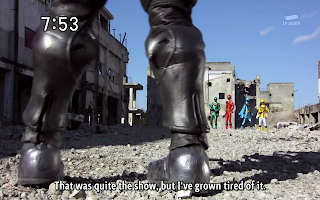 They can also gender-swap costumes as shown by the blue and yellow Magiranger here.

Shikabanen manages to knock the rangers back to their Gokaiger forms, but is completely overwhelmed by them. He is then finished off by the Gokaigers Final Wave which is done by putting their keys into one of their weapons. 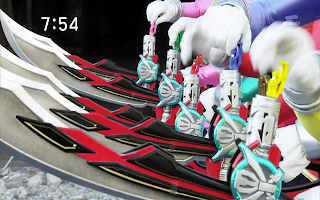 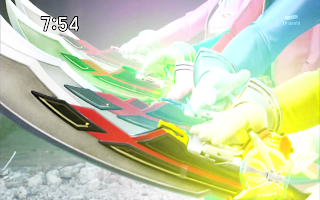 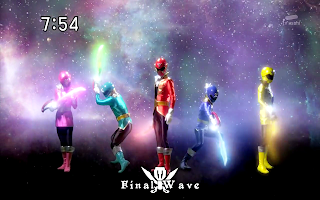 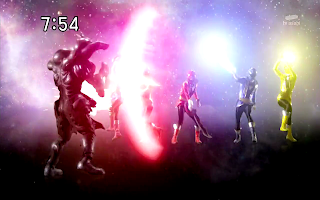 Monster goes boom, but no giant battle, this time.

The episode ends with the Gokaigers talking about how they have made themselves enemies of the empire and what to do next. At this point, the kids and teachers that the rangers saved attempt to thank them, but they say they are just pirates looking for treasure and only fought because of the curry rice so no thanks are needed. You can tell they were secretly happy though. The end!

This episode was fantastic. The action was a lot of fun, the writing left a lot of mysteries for later episodes and was easy to follow, and the characters all appeared likable. It is an interesting concept to take anti-heroes and put them in the Earths defender position. (This was many years before the Lupinrangers.) From beginning to end, this episode was enjoyable and just feels good to watch so I highly recommend it.

If there was one nitpick, it would be the Gokaigers alien status. It is established that they are all from different planets, but they all look, speak, and act Japanese. Even saying "itadakimasu" before eating. But, if that is my only complaint than you have nothing to worry about if you ever decide to watch this season. 5/5
Posted by Cendoo at 12:00 AM