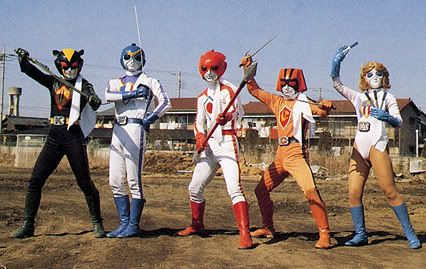 Time to look at the 3rd Super Sentai that was at one point considered the first. At first glance, these are the ugliest costumes I've seen in any of these shows, but grow on you. It is dance themed team with each ranger representing a different country. With that in mind, let's take a look at this 1979 episode.

The episode begins with a lady carrying an umbrella with a poisoned tip that she uses on officers and other random people while walking down streets, subways, and large crowed areas. The villain in disguise, a serial killer, or maybe these targets were specific for a reason?

Cutting away, we see some guy trying to rent a car, but he still owes them money from the last time he rented and is given a receipt. Time to meet the Rangers.


After receiving the call to arms, he takes a rented car and moves out. How did they know he'd be there to receive this message? They also didn't say his name.

This un-named man then goes on a car ride to give the call to arms to 3 others guys presumed to be the other rangers. I do not miss the days where the girl joining was a stand out thing.

Once all 4 of these gentlemen are gathered, they head to a secret base hidden inside a storm drain. Oh no! There are more TMNT parallels? Finally, once the 4 arrive, they say their names. Masao Den, Kensaku Shiraishi, Kyousuke Shida, and Shirou Akebono. Once at base, they are informed of the 3 assassinations that happened at the beginning of the episode (which were 3 National Defense Agents) and that the cause of death was potassium cyanide poisoning. Dang! These older seasons get serious and use a real poison. They know that the killer is a woman with a red umbrella (somehow) and are told to go after her. Thus the chase begins.

The 4 Battle Fever rangers follow this woman and ultimately ambush her in the middle of a baseball field. Why did she walk into there? There is a small chase, but the assassin finds herself surrounded. 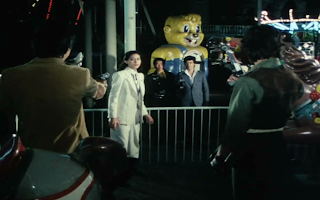 A baseball field and amusement park? Where are they? I wanna go!

Oops! Turns out this wasn't the assassin but a woman wearing the exact same outfit who also turns out to be the 5th Battle Fever member Diane Martin. I somehow knew that was gonna happen.

Don't you hate it when that happens? You go to fight someone to death, good vs evil, only to realize you both wore the same outfit and the night is just ruined.

Now, it is time to introduce the main villains, which are named Egos. They better let go. 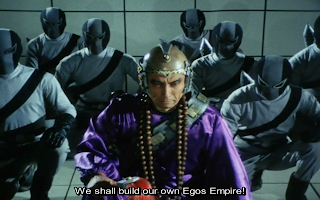 Ego hates mankind and wants to build their own empire over our worlds demise. Simple enough. They've already caused uprisings in America, Europe and the whole world. So, villains that aren't only focused on Japan? I can dig it.

Okay, while the Battle Fever's General was explaining Ego, they showed some disturbing images of homes on fire, tanks, and some other post war looking stuff. I don't know if these were made for this show or stock but it was unsettling.

The exposition continues, it turns out, Diane was dressed as the killer as a decoy strategy, but when Battle Fever interfered, her and Mr. Foster decided to meet at the baseball field to regroup. Oh, guess that wasn't a plot whole. Diane is now joining Battle Fever and is revealed to speak Japanese and Mr. Foster says he is going back to America. They have a happy goodbye hug while both of them have terrible lib sync dubbing.

Mr. Foster is supposed to have non matching lip flap because he is actually speaking english and they had a translator at base for him. Diane is only slightly off, but it is still noticeable and she is supposed to actually know Japanese because FBI agents are required too.

Sadly, this is where drama happens. Mr. Foster is revealed to be Diana's father after he is killed by the same assassin at the airport. Diana is devastated.

This is supposed to be an emotional scene, but is it kinda ruined by an abrupt jump cut. 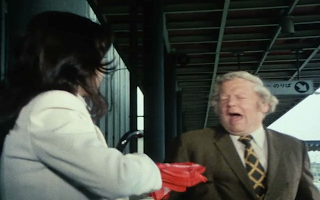 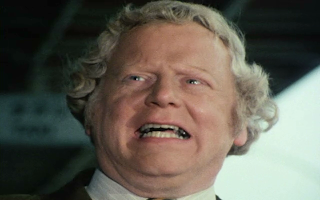 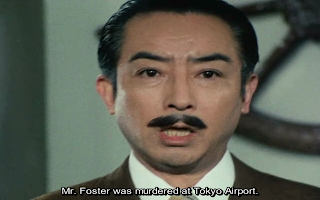 There was nothing in-between that second and third picture. No collapse, witness, just a stab, grunt, and bam! "Mr. Foster was murdered." Also, there is no implication of any passage of time. How did the General know this happened so fast and why is he so emotionless about it? That, was REALLY distracting.

Diane runs down a dark tunnel that leads her to the beach side where she stares out into the ocean while having flashbacks of that goodbye hug from a few minutes ago and vows revenge for her father.

This was 1979 so, I'm not sure cliche' all this was at this point but dang, between that and the jump cut it was almost like a parody of a tragic scene.

The General calls for the 5 rangers and they get a glimpse of their giant robot.

In addition, there battle suits are ready for use. Suits that will make them more efficient. Somehow. 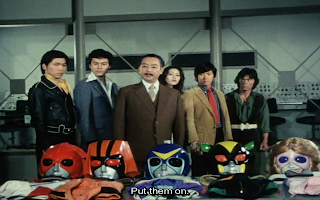 Wait! They're actually like, suits? Costumes? Not a transformed state? I feel so bad for J.A.K.Q. now. They had to be surgically turned into cyborgs to achieve the same level of power. 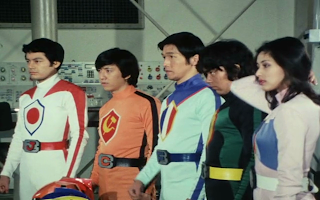 These helmetless scenes are very helpful for immersion. Something most Sentai seasons lacked over Power Rangers. I am always happy to see them.

Since the episode is doing it, it is a good enough time as any for the Ranger Role Call! 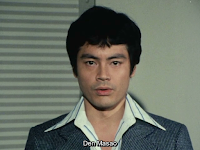 Masao Den - Battle Japan. The leader. A skilled martial artist with a military, or National Defense Force, background. His dance is the Kung Fu Dance. 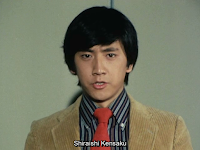 Kensaku Shiraishi - Battle Cossack. Second in command. An orphaned child who used to hunt birds with a slingshot. Due to his tragic background, he has the constant desire to protect those weaker than him. His dance is the Cossack Dance. 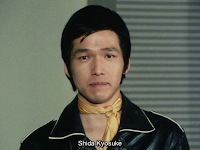 Kyousuke Shida - Battle France. He is the flamboyant type and a flirt with ladies who studied beauty in France and loves to eat escargot. His dance is the Flamenco. 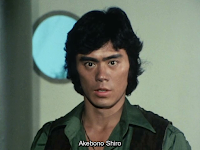 Shirou Akebono - Battle Kenya. Born and raised in the jungles of Africa and can now speak to animals. He can eat just about anything and cooks some nasty smelling meals. His dance is the Tropical Dance. 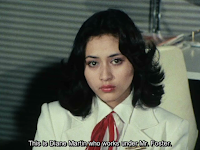 Diane Martin - Miss America. An FBI Agent from America working for a Mr. Foster who joined the team to avenge her fathers death. (The exact same story as the last pink Sentai Ranger.) Sadly, doesn't get a "Battle" in her name. Fun Fact! Her actress has the same first and last name.

No more explaining things, the umbrella assassin comes out again to face against Battle Fever. The umbrella lady reveals herself as a monster while a bunch of other umbrellas show up and become the foot soldiers.


Monster of the week. Stands still a lot.

The start of the fight scene is pretty lame. There is an over use of jump cuts which makes things hard to follow. It basically consists of, enemy runs forward, rangers does dance pose, it cuts between ranger and dance floor, then cuts back to the enemy taking a hit. 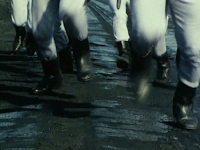 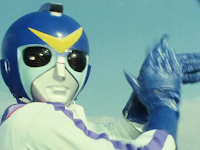 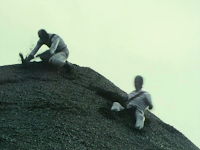 That is a bit of an exaggeration, there are some actually attacks that make contact. However, this dance thing is something you have to really embrace to get into this season.

Eventually, the rangers pull out there weapons and things get better. Red has a spear, Blue gets a rapier, Pink has throwing knifes, Orange wields two sais, and Black has a whip.

Unfortunately, without the jump cuts, the remainder of the fight scene feels floaty and almost slow motion. Don't say it was due to limited technology of the late 70s. It doesn't take editing to choreograph a fight.

Bat Monster fidgets around like a scared animal while the rangers take turns hitting him. Finally, they use their finishing move by jumping into the sky to form a BF which summons poles for each of them that turn into a combined blaster that fires missiles at the monster making it go boom into fire works. That was a lot of process.

The day is saved, the main villain vows to get even with Battle Fever and the episode ends with the 5 rangers riding horses into the horizon. The end!

This was an alright episode, but it aged horribly. The acting was good, writing was okay, costumes were goofy, and the action was terrible. While I really wouldn't call this out right bad, especially given the fact that it is 40 years old, it is hard to really recommend it to anyone besides Super Sentai historians. I know there is an audience or old and corny, but overall, I only give it a basic passing grade and move on due to how forgettable the ride was. 3/5 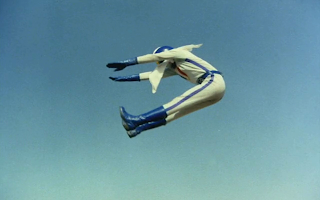 I will leave you with this.
Posted by Cendoo at 3:00 AM