Originally a Super Famicon exclusive game known as Koutetsu no Senshi from 1995, Piko Interactive developed an english version of this game for Windows in 2016 and an official SNES port in 2017 known as Iron Commando. But, that's history, click "read more"

The story of this game is very simple and told through an opening cutscene. There is a radioactive meteor heading for Earth that expert scientist say must be destroyed. However, there is a gang called G.H.O.U.S.T. that also wants the meteor. Now, it is up to the Iron Commando to put a stop to this gang and get to the meteor in time.

An okay setup, but not great. It is never said what this G.H.O.U.S.T. gang wants the meteor for or who they even are. The fact that it has radiation and is heading for Earth would make it a danger to them as well.

The only other writing in this game are some subtitles occasionally shown during game play. 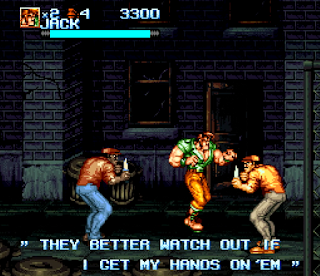 Writing as a whole is passable, but nothing special.

Iron Commando's game play is a simple beat-em-up in the same style as Final Fight or Streets of Rage with 2 playable characters. 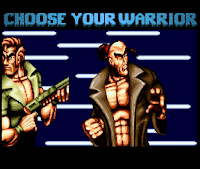 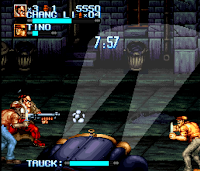 Controls are very simple; there is one button to attack, one to jump, one to pick up items, and you can grab enemies by walking into them. There are also a limited amount of grenades the player has that can be used to attack all enemies near your character.

The combat is smooth with some good animation, unfortunately, without a second player, the challenge factor reaches frustrating and cheap levels. Enemies will swarm you, attacking on both sides and there is little the player can do to avoid these attacks other than constantly hit and move.

Even on easy difficulty settings, without a second player it will take a lot of trial and error in order to beat this game. Continues can be earned, but this will only help for so long. This is truly the arcade style of gaming, fun yet strenuous in order to gobble those quarters and hide the fact that the game isn't very long by making it difficult to complete.

The sound effects in this game sounds almost exactly like the same hits and grunts you hear in dozens of other beat-em-ups from the 90s including Final Fight, Streets of Rage, or The Death and Return of Superman. Stock, yet effective.

Music is catchy and fitting for action gameplay. Overall, the audio is good quality.

Visually, this game looks good if not standard for SNES quality. Animation is lacking. People barely move when they aren't attacking you can tell the minimum number of sprites were used. Despite that, there is still enough animation to get the point across and backgrounds look nice so, there is no major harm.

Iron Commando is a basic, off brand, SNES beat-em-up that has an appeal to retro-gamers. Tracking down an actual SNES cart of the game runs around $20-$50 and even on the lower end, I cannot recommend it for that price. However, the much cheaper steam version, that on more than one occasion had become part of a sale bundle, is a fare enough price and worth checking out. This game is exactly what it looks like, an old school, 2.5D, side-scrolling beat-em-up with no major differences from the many other titles of the genre. Take it for what it is because there is almost nothing interesting to say about it.