Sometimes a game gets cancelled.  Whether it's for the right or wrong reasons, it sends our minds going crazy with thoughts of what could've been.  You also have your zombie games that get dug up, finished, and released to the public.  This is one of those games.  This is Dorke and Ymp, a game that was supposed to have come out for the SNES back in the day.  Should it have stayed in its grave? Find out in this exciting review of Dorke and Ymp for the PC.  (Click on "Read More" to read the full review.) 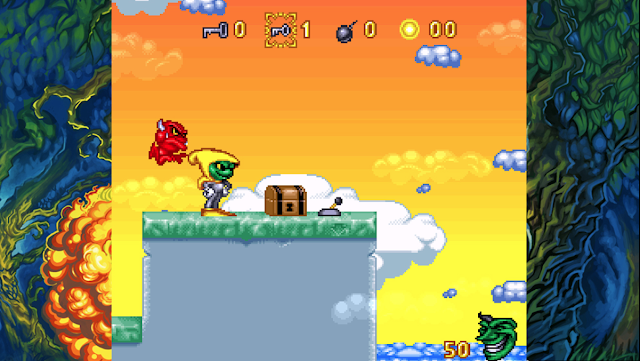 This game stars Dorke, a little green goblin who is the runt of his family.  His family often pick on him and play mean spirited pranks.  Dorke is sick of all of this and demands respect.  Dorke asks his older brother about how he can learn magic.  His elder brother says that he will teach him after Dorke completes his mission.  Dorke now has to go deep into a forest to complete this task.

Dorke's brother lends Dorke his pet imp named Ymp.  Sadly, this quest is a mean spirited prank by his brother.  Dorke's brother just wants to get rid of him and sends him to a place where Dorke will fail and die. (What a f**king A**hole!)  Can Dorke and Ymp survive this quest? 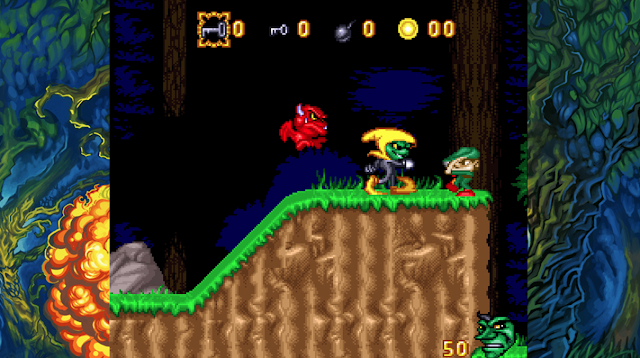 This game is a platformer that has you traversing though levels in search for a big key to unlock the exit.  The levels are huge and puzzle-like and you'll need to go all over the place just to find the items you need.  Yeah, it's not simple and that makes this game very interesting.  Except this game shoots itself in the foot by having a lot of levels with terrible stage and puzzle design.  Most of the levels require luck instead of skill.  They will become so cheap that you will need to resort to exploiting the game in order to get pass and it sucks the fun out of the game.

There's an annoying bug when you grab a ledge that's very close to a bottomless pit.  It'll count as a death even though the player is clearly hanging on to a ledge.  You can even control Dorke while this bug is happening.  This bug is especially annoying because it activates during some vital ledges, making those parts impossible to beat.

Dorke starts off with an incredible fifty lives!  This is a lot and you'll need every single one of them in order to survive.  This is also not a small game that can be beaten in an hour.  There are around forty levels spread across several different worlds.  This is insane considering it was a game meant for the Super Nintendo.  The game itself wasn't designed to have a save feature, but it does use passwords.  Thank goodness that the custom emulator that this game used has a save state feature.  The custom emulator also has a few graphics options and there's nice artwork that pops up on the sides of the game while running in fullscreen mode.

The controls are smooth and responsive unless you are trying to use Ymp.  Ymp's moves can be smooth sometimes, but they can also be very delayed.  This problem is due to Ymp's AI as he is a dumba**!  Or to put it in professional terms: Ymp's AI isn't very good.  Sometimes it takes him ages to pick you up and he won't even try to grab you while you are in mid-air.  His attack is okay, but sometimes Ymp will fire in the wrong direction.  Yeah, Ymp's AI could've been much more tighter. 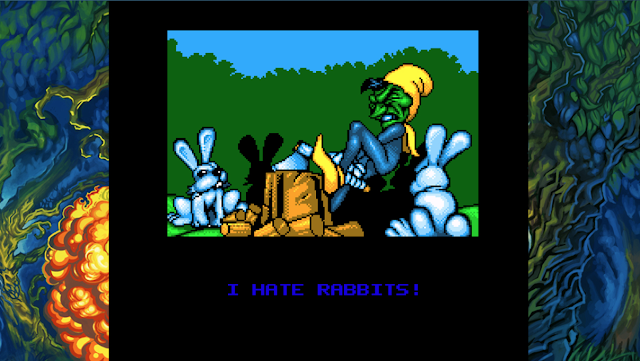 The 16-bit graphics are very crisp and clean, with nice coloring and fun character design.  However, that health bar that's made up of Dorke's face is very creepy.  It looks like a weird amalgam of The Mask and Trollface.  Animation is very smooth and consistent. 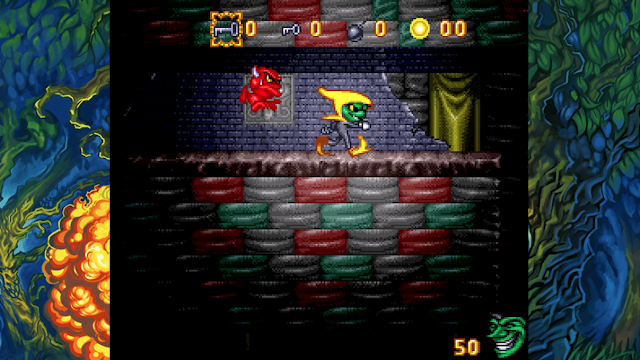 Soundtrack is my favorite thing about this game.  The music has a nice keyboard and bass sound that will make you feel relaxed.  I could just leave the music running for an hour or so and have more fun listening to the game rather than playing.  The music does become repetitive, but it doesn't get annoying.  The sound effects are very basic, you mainly hear grunting and projectile throwing. 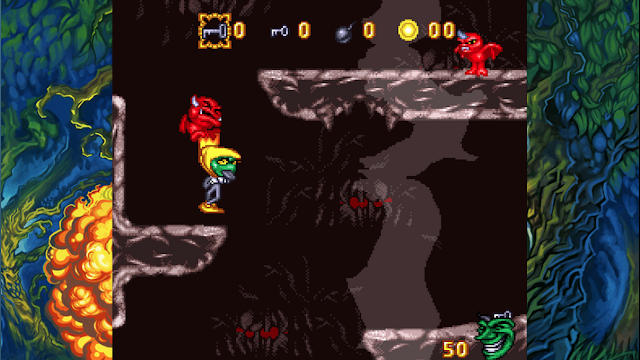 Overall, Dorke and Ymp is a game that could've been good if it weren't for its bad level and puzzle design.  Despite that, I'm glad to see that an originally unreleased and unfinished SNES game finally got released.  That fact alone makes this a slightly memorable game.  If this had come out back in the day, it would've blended in with the other bad SNES games and have gotten lost in time.  Dorke and Ymp gets a 4 out of 10. 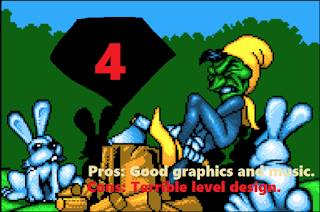 Posted by Retrokaiser at 7:00 AM