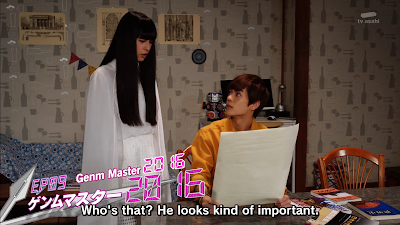 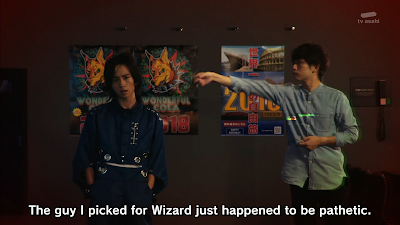 This episode opens up with all three Time Jackers (Uhr, Ora, and Schwartz) arguing at a bar, going on about how to defeat Kamen Rider Zi-O.  Uhr has an ace up his sleeve, he had just given someone the power of Kamen Rider OOO and this new Kamen Rider OOO is someone that kamen rider fans should know very well.  Who is it? Why it's none other than Dan Kuroto.  Yup, a kamen rider villain from the past is back and now has the power of a kamen rider.  Well this is one hell of a way to open up a brand new story arc and so far it already makes up for the weak ass Kamen Rider Wizard cross-over episodes (AKA Episodes Seven and Eight).

Sougo is reading up about Oda Nobunaga (yes, that guy from the Koei video games is not just a video game character, he is Japanese history!)... Anyway! Sougo is reading up about Oda Nobunaga and Tsukuyomi comes in and learns about him too.  Sougo's Uncle gets the gang excited and they all rush in to the loungeroom to watch the TV.  What they see on TV is quite interesting as it's Dan giving a big speech, going on about how he is now the king.  Dan also announces that his company (which is in a giant castle) has been declared it's own country and will be ran by his own rules... Kinda like that episode of Family Guy.  The press that are there absolutely hates this and Dan retaliates by turning one of the press into his minion (not the banana loving kind). 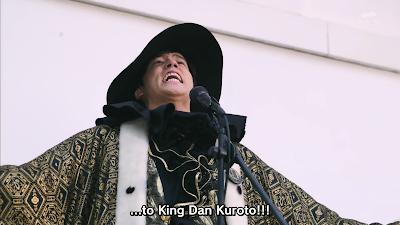 Sougo gets really excited by what he had seen and runs off to Dan's mansion to see all of the chaos in person.  Geiz and Tsukuyomi follow because they have already figured out that this crazy power is all the work of the Time Jackers.  Our heroes sneak in to Dan's yard and spot some of his monster minions attacking his very own security guards... You know what this means? Yup! IT'S HENSHIN TIME, BABY! Sougo and Geiz transform into Kamen Rider Zi-O Fourze Mode and Kamen Rider Geiz Wizard Mode.  Our heroes have to really work hard to defeat the two minions, they can take quite the beating but out heroes finally defeat them and then the minions turn back into humans.

Dan walks out of his castle and introduces himself to our heroes and then transforms into Evil OOO.  Evil OOO is about to attack but he gets distracted by a robot bird that swoops in on him.  Evil OOO chases the robot bird and Sougo goes after Evil OOO.  Tsukuyomi notices that Evil OOO has 2016 written on his back, so they know what point in time they must go to.  Lucky for our heroes, robot bird dropped a kamen watch and Geiz picks it up.  The kamen watch belonged to Kamen Rider Ex-Aid and this leaves our heroes curious about what Ex-Aid has to do with all of this. Geiz and Tsukuyomi waste no more time and they go to the year of 2016.

We are at the year 2016 and what better way to introduce this next scene is to show something incredibly dark.  We see Evil OOO/Dan murder his father by picking him up and snapping his neck.  Why'd he do this?  It was so that he could take over the family business.  Geiz and Tsukuyomi show up and Geiz morphs into Kamen Rider Geiz again and gets into a fight with Evil OOO.  Evil OOO comes prepared and summons a load of minions to attack Geiz.  Back in the present we have Dan practicing a speech while he is getting fitted for new clothes by a woman named Izumi Hina.  Izumi doesn't like what he is doing, so Dan slaps her (more dark stuff).  Dan goes to slap Izumi some more but in comes Sougo.  Sougo stops the slap and gets excited that he is meeting up with a king. 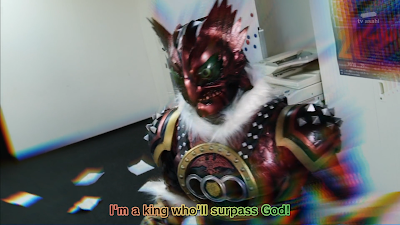 Geiz is still getting beaten up in 2016 by Evil OOO's minions but a comeback is at hand.  Geiz knocks the minions back and powers up into Kamen Rider Geiz Genm Mode (that's Genm pronounced as "game").  The fight turns into something you'd find in the '60's Batman TV show! Geiz is beating everyone up and we get big cartoony boxes that says "hit" on them when he hits a bad guy.  Tsukuyomi also notices that Evil OOO has a different year on his back, 2010! Yup, their suspicions were correct, there's a lot more to this case than meets the eye.  Geiz finishes off Evil OOO with a finisher, so Tsukuyomi calls up Sougo with her time traveling phone to see if anything is different in the present/future.  Dan is still Evil OOO in the year 2018 and Sougo gets hired as Dan's servant!  Not just that, Dan also gets his minions to confine Izumi, so she can become Dan's queen.

Geiz and Tsukuyomi flee the battle but on Sougo's end he gets a visit from Woz.  Woz tells Sougo that he'll need to find the real OOO and get his powers in order to defeat Evil OOO.  All three of our heroes meet back up with each other and this is where something ultra stupid happens.  Geiz sees that Sougo is wearing a work uniform supplied by Dan, so Geiz morphs into Kamen Rider Geiz and tries to beat up Sougo.  Sougo morphs into Kamen Rider Zi-O and the two have a very decent fight but Zi-O is the one that comes out on top.  Dan is very happy with Sougo's victory, so he promotes him to captain... Now I see what is going on!  Sougo is one cunning kamen rider if it is what I think that he is doing.  It is also revealed that Dan has the real Kamen Rider OOO/Hino Eiji locked up in his castle.  Sadly, we'll need to wait until the next episode to get the answers that we need. 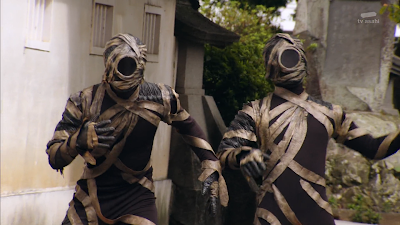 Story in this one is quite interesting and entertaining and I really enjoyed how they chose to cross-over with a past villain instead of a hero.  Giving an old bad guy the power of the kamen is also quite a scary and thrilling thing to see, it adds on so much more weight to the story than giving this power to random people.  This choice also keeps the show feeling fresh and opens the door up for more awesome things.

Other than the villain thing, story was fine and I loved the idea of Sougo being ultra excited to see a king for himself... Even if it is an evil king.  One scene I did find to be pretty dumb was how instantly Geiz tried to kill Sougo when he saw that Sougo was working for Dan.  It felt rushed and really dulled down the feeling that it was aiming for. 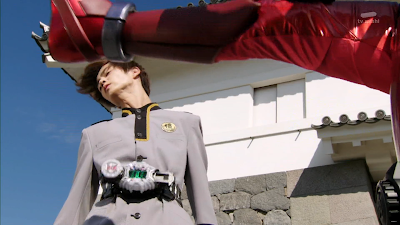 Action in this episode is fun to watch, we get some decent fights and I loved seeing our heroes fighting some goons for once.  I also wasn't expecting to see dark moments in this episode but we got some.  There's a murder scene where a guy gets his neck snapped (read the summary if you want to be spoiled as to who it was that got killed) and a woman gets smacked around.  Yeah, you won't (or rarely) find this stuff in our English adaptations of these shows.  What was fun to look at were the costumes, so much character was put into them and even the goons had charm.

Overall, very decent episode that brought something new to the table.  I am very excited to see how this story arc will conclude.  I'm giving this episode a 7.5 out of 10.
Posted by Retrokaiser at 11:21 PM