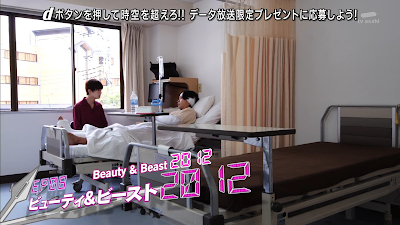 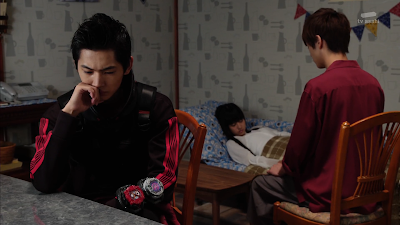 This episode opens up with Sougo and Geiz watching over the comatose Tsukuyomi.  Geiz is mad at Sougo because (according to him) Tsukuyomi wouldn't have been in a coma if Sougo hadn't interfered in his fight with Evil Wizard.  Geiz decides to search for the mysterious man with the kamen watches (he was from the previous episode) but little does he know, he is being followed by the mysterious person that he is searching for.  Sougo is off visiting Hayste's friend at the hospital where Sougo is told about how Hayase was turned into Evil Wizard... No new information here, just a flashback.  Sougo also runs into Woz and we get another scene where we get no new information because all we get is Woz telling Sougo that he knows Geiz... Okay, this is new to Sougo, not us.  It's nice to see that this very thinly stretched out story arc is getting spread even more thin with this episode.

Hayase is still on the run and is hiding in an ally-way, only for Time Jacker Ora to find him.  Hayase is scared and wonders what to do next but Ora tells him that he needs to seek revenge.  Geiz finds the mysterious man and the mysterious man has no clue why he has the kamen watches.  What makes this worse is that he refuses to give the kamen watches to Geiz until he has figured out why he has them in the first place.  Hayase stalks the girl of his dreams, turns into Evil Wizard and tries to kill her but Kamen Rider Zi-O pops up and saves her.  Evil Wizard isn't happy, so he liquefies himself and runs (heh heh heh) away.  Kamen Rider Zi-O de-morphs and tries to comfort the girl and aims to protect her...  Yeah, nothing much going on here. 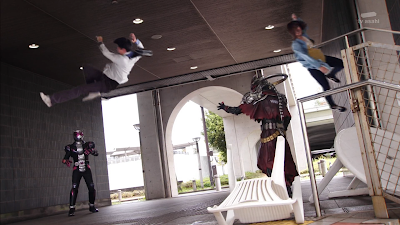 Sougo and Geiz return to home base and try to figure out who the mysterious man is.  Sougo ends up calling Woz for help because they have no clues.  Woz tells them that the people that have no memory of how they got the watches are the people who were supposed to be the Kamen Riders. The reason why they have no memory is because history has been changed.  Sougo starts to gets the right idea and so they make plans.  Geiz walks back and visits the mysterious man and tells him that he should have his memory back very soon.  Evil Wizard is still on the quest for revenge and he attacks his friend and the girl he loves, at the hospital... But it ends up being a trap for Evil Wizard because Sougo was hiding in a hospital bed and ambushes Evil Wizard.

IT'S HENSHIN TIME, BABY!  Sougo morphs into Kamen Rider Zi-O and starts beating up Evil Wizard all throughout the hospital.  Evil Wizard fights dirty and starts throwing people at Zi-O by using his gravity attack and then runs off.  Zi-O powers up into Kamen Rider Zi-O Build Mode and catches up with and defeats Evil Wizard.  The mysterious man regains his memories, then he transforms into Kamen Rider Lion AKA Nitous Kousuke.  Instead of Nitou being friendly towards Geiz, he gets into a fight with him.  Geiz morphs into Kamen Rider Geiz and the fight gets very exciting but ends after a few punches.  Kamen Rider Lion gives up and says that he only fought Geiz as a test to see if he was a Kamen Rider.  We get a real Bill and Ted moment next as Nitou tells Geiz that he remembers him from the past because he was given his rider watches by Geiz himself (WHOA).  Nitou gives Geiz his kamen rider watch and Geiz blasts off to 2012 in his robot rocket time machine monkey hyper force go!... I'll have to review that old cartoon in this w*nkerific spoiler filled format one of these days... Or maybe not. 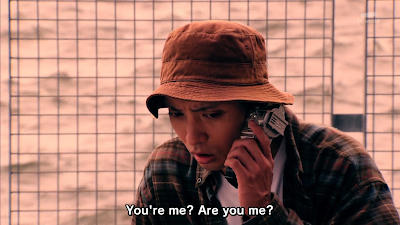 Zi-O is still fighting Evil Wizard in another logic breaking battle and then Woz pops in and tells Zi-O that he must go to the year 2012.  Zi-O refuses to listen to Woz and then powers up into Kamen Rider Zi-O Fourze Mode and continues to fight Evil Wizard.  We cut to 2012 where Hayase is making a deal with Time Jacker Uhr...  Yup, same scene as the one found in the previous episode, so I'll skip to the next part.  Evil Wizard is testing out his powers but in comes Kamen Rider Geiz to save the day... and time!  Geiz has an extra surprise, he powers up into Kamen Rider Geiz Wizard Mode and starts beating up on poor ol' Evil Wizard.  Zi-O is still battling Evil Wizard in the present and Evil Wizard is getting very desperate and tries to set Zi-O on fire... It doesn't work and Zi-O comes in from the flames and gives the most powerful attack that any hero can give... A stern lecturing.

Zi-O tells Evil Wizard that he should express his feelings to his crush, instead of being all violent and evil about it.  This starts to work but not for long, Evil Wizard gets more angry and fires water at Zi-O.  Zi-O and Geiz use their finishing moves on both Evil Wizards and defeat him/them.  Everything is good again!  Tsukuyomi has awoken from her magic coma!  Nitou is also back to normal! As for Hayase, he gets to make a phone call... To himself!  Yup, Woz has a phone that can call people across time.  Hayase tells Hayase (hee hee) to tell the girl of his dreams what his true feelings are, so he doesn't end up like him in the future (again! hee hee!).  Past Hayase mans up and talks to the girl and...  We don't see what the girls response it... But that doesn't matter now!  Every thing is hunky dory and back to normal and that concludes this story arc. 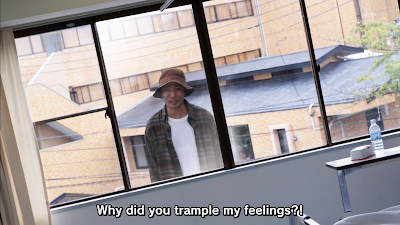 Another episode where nothing much is going on and put that together with the previous part, you've got an hour of television that's got a plot that's stretched out way too thin.  This episode also has way too many filler scenes that meant nothing and if you cut them all out, you could have this entire arc done in one episode.  Most of the characters that were made for this story arc were incredibly bland and I simply did not care for them.  Not to say that all of the characters were bad as the main characters are still interesting to watch and I really enjoyed seeing Kamen Rider Lion.

I did enjoy the action in this episode, we got to see some cool moves and a really fun but really short fight scene between Geiz and Lion.  I also really enjoyed all of the costume designs for the kamen riders and it was great that we saw quite a array of designs in this episode.  It was also a very nice touch seeing how our heroes can switch between the different versions of their powered up stages while in battle.  It did answer my question about what if they used another rider watch while powered up in a different rider form that's not their standard one…  Although I had imagined that the forms would just stack on top of each other to make some freaky new kamen rider designs but I was wrong.

Overall, not a very interesting episode at all and it's even less interesting as a complete story arc.  I'm giving this episode a 4.5 out of 10 (the action scenes saved it from being a lower score) and I give the story arc as a whole a 4 out of 10.
Posted by Retrokaiser at 11:50 PM