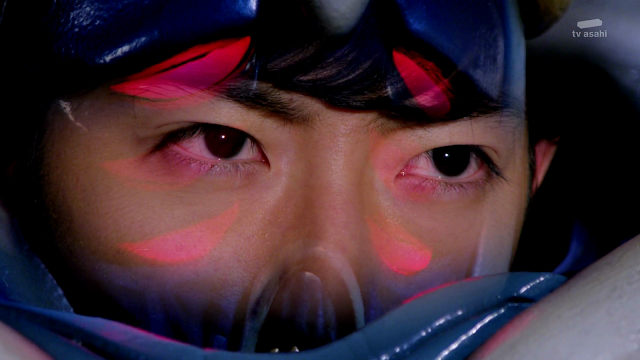 The episode begins with the Patrangers going over the aftermath of the crane findings and what appears to be the shattered remains of the Gangler's safe who used to have the collection item. Jim analyses the safe and we learn more about it. About time that thing was explained. 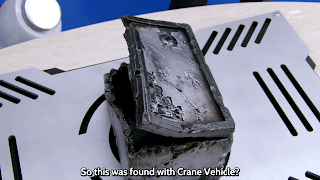 These safes are extremely durable from the outside but very fragile on the side. They may be the cores of Ganglers given that they are used for the revival/grow giant process.

This is broken up when they get a call about a new Gangler attack around the same area the Lupinrangers are walking home from shopping. The coincidences strike back. 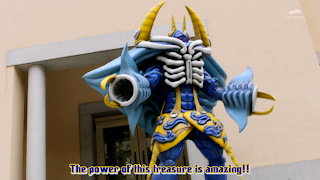 This lovely blue stingray/skeleton looking Gangler is this episodes monster of the week. The Lupinrangers arrive first without their phantom thieves costumes on and henshin just in time to cut to the theme. Taking a risk by morphing without their disguises. I hope they do something with that. 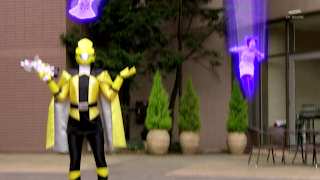 The Gangler wastes no time showing off his power. Immediately, Umika is body switched with a dove. Finally! Someone who uses this power practically. They just have Umika's voice narrating over a dove but the Lupinyellow actress had to behave like a bird. Yes, it was funny. Tooma calls the Gangler a liar, so he switches them back to prove that he really does have this power. Lame! They rush in and try to take his collection item while he is feeling shame over being tricked. You call that a trick? He resists and tries to body switch Tooma with a dove but accidentally hits a reflector bouncing the beam back at himself. Seriously? This monster sucks.

This Gangler (whose name they still haven't said) is freaking out and gets knocked out of morph by an angered Tooma just in time for the Patrangers to arrive who barely missed that. He acts completely hysterical but doesn't undo the body switch because the Patrangers are landing a lot of hits on Gangler-Tooma and he fears the pain, so just runs off. This is a complete 360 for Tooma's actor. Normally calm and collective now has to bounce all over the place. It's an impressive performance, but that doesn't make the writing any better. The Lupinrangers retreat leaving the Patrangers to think they've teamed up with the Gangler.

Things get even more silly from here. Tooma-Gangler, still freaking out about the human body, accidentally bumps into a couple school girls who insist on taking selfies with him for being so cute. He has never been hansom before and has new found joy. Meanwhile, Gangler-Tooma is being sneaked away trying not to draw attention. Nothing suspicious about a huge walking tarp. They retreat back to their restaurant when the Patrangers pay a visit in order to check on Tooma. Of course. He is still hiding under the tarp. For a moment, it looks like Tsukasa has spotted him, but she was just swatting a some dust she thought was a mosquito, then sits on the tarp. This almost gets them caught, but they say is just trash and start kicking it around and bouncing on it. Seriously. The slapstick is real. At least they are having fun with this. Narrowly avoiding getting caught, Tooma attempts the reverse spell but it is unsuccessful. Knowing this means the Gangler has to do it, Kairi goes after him. Why hasn't Kogure given them any information on this target? 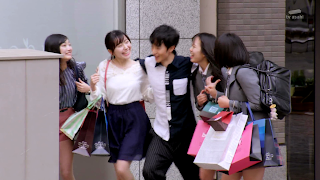 Kairi finds Tooma-Gangler messing around with more girls and confronts him to switch bodies back. He refuses, enjoying his new popularity, which makes Kairi furious but he hesitates to strike his comrades body. Taking advantage of his, he strikes Kairi, henshins into Lupinblue and rushes off to rob banks. Ironically, for Phantom Thieves they haven't actually committed any major robberies like that.

Back at the Bistro, Umika takes the lupin collection out of the Gangler body. Don't they need those for the powers to work?

Kairi returns with his head hung low to speak with Tooma about the situation. He is obvously very worried about Tooma and how Aye (his lost fiance) would respond if he was stuck in the Ganglers body. Gotta admit, I was not expecting real drama like this. Tooma tells him not to hesitate, reminding them of their oath. "No matter who falls, those remaining will grant our wish." 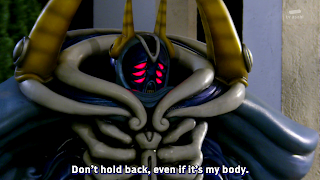 With the decision made, they confront the Gangler. All three Lupinrangers arrive, but Kairi challenges him to a one on one, winner gets the collection item. For the record, he threw it at Umika and the sound it made confirms the prop is made out of a rubber ball. They both henshin and it is time for red vs blue.

The fight plays out like a street brawl with a lot of wrestling to the ground. Kairi gets him pinned down, but still can't bring himself to take the shot and gets pushed back. However, that quickly changes after a few choice words from the other two. Kairi ultimately wins with a pretty cool move where he twirls his gun and fires at the same time knocking the Gangler out of henshin. Cool, even if it didn't make sense. He points the gun at his heart and fires just as he switches bodies back. 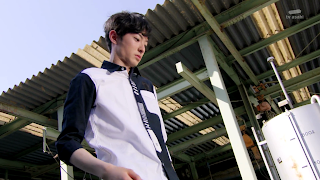 Is he really dead? Nope, Tooma gets up and fires at the Gangler. First thought is they snuck some kind of guard in his pocket. Also wrong. Kairi did actually shoot him but avoided a fatal blow by using his hand as a cushion. Wait..

They go for a finishing blow and do not mess around. Goodstriker appears and Lupinred multiples to 3, Lupinblue equips the shield & boomerang combo, and Lupinyellow uses the helicoper finishing shot. The resulting final blow is a huge overkill.

Naturally, Goche appears and finally reveals the Ganglers name to be Manta, and makes him grow. A little too late to give a name. The Patrangers spot the giant from a distance and Lupinkaiser is formed off screen. That is a new one. Had to sneak them in somehow I guess.

The giant battle actually starts out decent. Manta gets some hits in and Lupinkaiser actually has some traditional costume attacks scenes rather than relying on CG. It doesn't last long though. They combine with both the Helicopter and Scissors VS machines to form Lupinkaiser Cyclone Knight and go for the finish. Bidding another eternal Adieu. 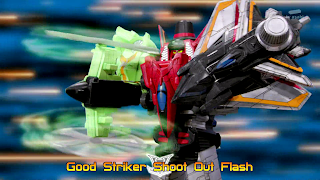 The episode ends back at the Bistro were the Patrangers confront Tooma on what they saw the Gangler doing in his body. They think he pretended to be sick in order to let loose with girls and try to give him some life advice. The tone has shifted full circle ending on a funny note. It is kind of funny watching the two teams trade places as the main cast and supporting cast.

I am genuinely shocked of how good this episode turned out to be. There have been tones of shows including at least 2 other sentai seasons and even MMPR that have done episodes about switching bodies and they are almost always terrible. This one surprisingly never felt awkward like any of them. It started out catching your attention being real funny then strikes you with some drama. "Go ahead and kill", "shot through my hand as a cushion" that is some dark writing that catches you off guard. If I had to nitpick anything it would be how the power worked. There was no explanation as to why Manta could use the collection power from Tooma's body and why it still worked when they extracted the item. But, that is my only flaw. Overall, I will recommend it. It was funny, dark, then funny again and never dragged. 4/5
Posted by Cendoo at 12:00 PM