This episode begins on kind of a bizarre mood. First, a man who looks a lot like Sakuya appears in a suit and saves a girl from a purse snatcher. 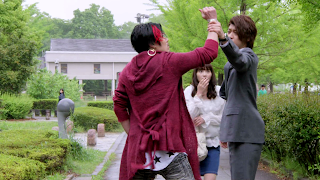 Then, it abruptly cuts to the Patrangers HQ where they are all there (including Sakuya) and are investigating some cars randomly becoming cut up. 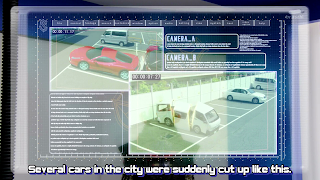 Which is quickly interrupted by their Deputy Commissioner Yanagami who rushes in and is furious about how much more popular the Lupinrangers are.

That was three changes in mood in less than 2 minutes into the episode. I suppose that is a little impressive. Also, no it isn't a translation issue, him calling Hilltop Hilton is a mistake pointed out in the episode.

Yanagami is screaming at them for not yet arresting the Phantom Thieves and putting their Global Police's honor at risk. Sakuya quietly points out that they're not fighting for honor which only ejaculates the fighting. Hilltop steps in here and offers to buy him lunch to calm the nerves; Yanagami agrees and tells everyone to come to show them how to be proper cops. Keiichiro and Tsukasa whisper advice to Sakuya basically telling him just to suck it up and endure. I feel for you man. The higher ups are always right even when they're clueless. Also, got to say I appreciate the self awareness this series has.

One opening theme later, we cut to the Lupinrangers Bistro where Hilltop decided to take everyone for dinner. Of course he'd pick there. Watching them from a distance is our purse snatcher from earlier who mistakes Sakuya for the guy who stopped him and reveals himself as this episodes monster of the week. I knew they weren't the same person! He is there for revenge. Returning the favor of humiliation. Kind of a slow ball plot for a Gangler.

Dinner is going about as well as a meeting with a clueless boss can go. Yanagami is sitting there, complimenting himself and criticizing Sakuya while the Lupinrangers watch with from a far. After very little time and just enough insults, Sakuya snaps.

Except not really. After dumping food on Yanagami, Sakuya starts panicking and screaming that he can't control himself and then attacks everyone around him leading to him getting fired. Obviously they are implying that this is the Gangler's power. But, part of me wants to believe that first act was at least partly his own doing.

Once again, not really, Sakuya narrowly avoids getting fired and is instead put under house arrest. None of the others believe his claims of being controlled and Hilltop confiscates his VS Changer. Things are getting heavy fast.

Goodstriker appears at the Bistro and tells the Lupinrangers that a Gangler was there that they didn't notice. Tooma puts two and two together and they decide to pay Sakuya a visit for questioning. He tells them that he felt someone grab his hand leading both parties to come to the conclusion that there is a Gangler can turn invisible. Personally, I was hoping for a puppeteer power but that works too. This also explains the cut up cars.

Sakuya tries to call and warn Hilltop but Yanagami cuts him off. Isn't it irresponsible of police to ignore potential leads like that? The situation worsens when the invisible Gangler attack and destroys Keiichiro and Tsukasa's car as they still don't know what they're up against. So, Sakuya makes the decision, ignoring his house arrest and that he will get fired and rushes out. Along the way, Hilltop cuts him off but after hearing his resolve, he decides to return his VS Changer and let him go. You can tell he never had any intention of stopping him. 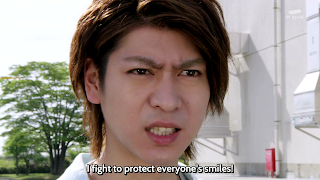 Like most episodes, the pacing kick in to high gear from here. Sakuya arrives just in time to save the others and points out that this Gangler emits green light from his safe whenever he uses his power even invisible. How could no one notice that till now? 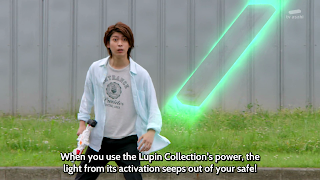 It is all routine from here. The Patrangers henshin up and the battle begins. The fight plays out more traditionally than most, some minor give and take and there is no cool moving camera. Only thing off is the lack of foot soldiers. Anyone seen the Portermen? They've been missing for awhile. In the middle of the scrap, the Phantom Thieves show up un-morphed. They paint the Gangler so he can't turn invisible, easily steal his collection item, and leave Goodstriker to aid the Patrangers. Talk about existing only for consistency.

The Patrangers use Goodstriker to fuse and easily win the fight. Finished with a cool move where they throw the Gangler in the air and blast him just before he hits the ground. Now, the obligatory giant battle. Somehow, the Gangler gains his collection powers back after growing (again) but the fight doesn't last long. A new combination with the crane and motorcycle is formed for a quick and easy victory. Earning them another Mission Complete. 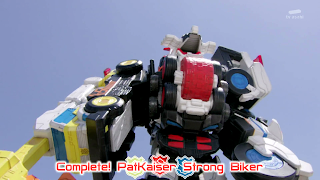 The episode ends back at the Patrangers HQ. Having broken his house arrest, everyone bitterly awakes Sakuya's dismissal when Yanagami enters the room. But, to everyone's surprise, he says "well done" denying any doubts he had for Sakuya. No, not because he saved the day, but because the Patrangers got to be front page on the newspaper and even their French HQ has sent compliments. It ends with a group "WHAT THE HECK?" following his departure.

This episode was silly, but a great character builder for Sakuya. Not perfect though; there are some noticeable plot holes. Mainly, how nobody noticed the invisible Gangler. There is more than one sense and he would have made a lot of noise behaving like that. Plus, I cannot believe that a square shaped green light in mid-air would have gone unnoticed. Also, who was that guy in the suit who looks like Sakuya in the beginning? Still, it is nice to see the police get an episode again, it is just too bad they don't get the same deep story lines as the thieves. Yanagami is way over the top and clearly doesn't care about protecting the peace. That, was forced. Regardless, this episode was fun a served a purpose to character development. 4/5

Next time, new rangers at last!
Posted by Cendoo at 9:00 AM