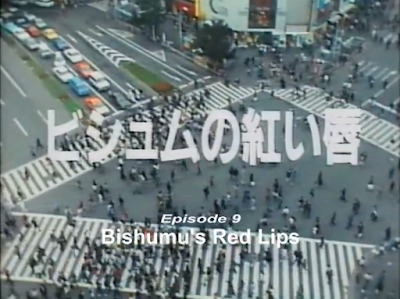 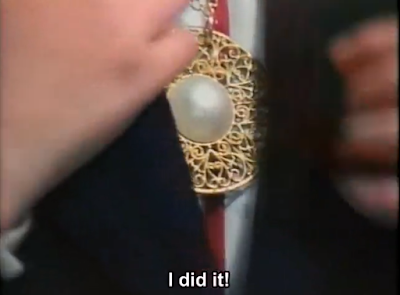 This episode opens up with two high school girls walking into a jewelry shop, where they have found something that they like, a beautiful pearl pendant necklace. One of the girls distracts the store clerk, while the other steals the beautiful necklace.  The two girls are in a bathroom and going on about how pretty the necklace is.  What the two girls don't know about the necklace is that it is 100% pure evil.  The big pearl that is on the necklace is actually an egg, an egg that contains a huge killer wasp (and not the band, W.A.S.P.).  The Killer Wasp hatches and stings one of the girls and the stung girl goes crazy! All she can sees is a giant wasp monster and after a moment of her running around the bathroom like a high rave dancer, she passes out on the bathroom floor (gross).

The scene of the wasp hatching is very funny.  When it comes out of its egg, it flies to the corner of the room and we get a close up of it.  This close up is funny because they make the wasp look overly evil, with its bug-eyed look and the rubbing of its appendages, makes it look like it is doing a classic Mr. Burns pose and going, "Excellent"!  It also feels like something right out of the SpongeBob SquarePants episode, Wormy. 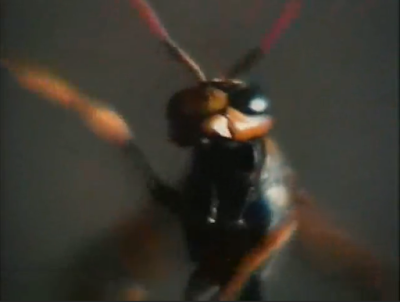 Next we cut to a woman opening up a present from her boyfriend and the present turns out to be one of those crazy wasp egg necklaces.  As you can guess, it hatches and the woman gets attacked starts seeing monsters.  Kotaro just happens to be close to the scene and sees the woman dropping the necklace and getting carried off to the hospital.  Kotaro goes around asking people about what happened and he then picks up the necklace and goes off searching for clues.  All of this also happens during the first minute of the show... Yeah, this is going to be a long review.

Next scene has us at Golgum HQ to where (you've guessed it) we find out that they are behind all of the killer wasp attacks.  Golgum's evil plan for the week is quite a straightforward one and what they are trying to do is to get people stung by the wasps, where they'll be injected with a deadly venom.  We are then thrown to a seemingly random (and also a very 1980's) scene with people skateboarding and break-dancing in the street... Yeah, I don't know why either.  Something interesting does end up happening during this scene, a group of break-dancers dressed in overly colorful costumes are attacked by a guy from a rival gang.  Why?  It was because the colorful break-dancers are B-boying on their turf !  Yeah, it's quite a weird scene to cut to, but I'm sure that we'll have answers for that later on in the episode... Maybe? Hopefully?  THEY F*****G BETTER! 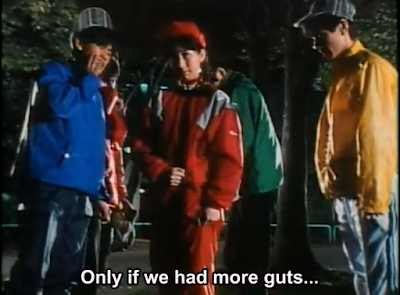 We get another scene of the two gangs at a park and it's bad news for the colorful gang, they are beaten up and left in drowning in their own shame (the feeling, not the penis).  The leader of the colorful gang is sad, ashamed and mad that she doesn't have enough power to defeat the other gang.  Be careful what you wish for because the Golgum has heard her wish and so they give her some magical bling and a sting from a giant wasp to give her more power... She also becomes the Golgum's slave.  Yeah, I wasn't expecting to have my questions about the gangs answered this soon into the episode and I am satisfied (not in the sexual way) and I like where this is going (also not in the sexual way).

Kotaro is out on the town and is hanging out with his family and friends, all while investigating this necklace business as well.  Kotaro finds a great lead for the answers that he needs.  Kotaru notices that the necklace has gotten ultra popular and sees that nearly every girl in town is wearing one.  What does Kotaro do? Nothing barbaric that's for sure.  All he does is asks some girls who have purchased these necklaces (yup, actual detective work).  Kotaro gets a better lead and he gets all the answers that he needs, including where that they are being sold at, so he rushes off to the shop. 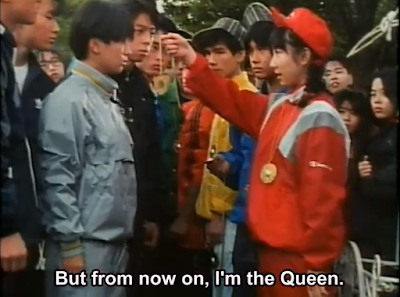 Guess what? (what?) The evil wasp necklace shop is being ran by the colorful break-dancing gang and they are selling them like gangbusters (no pun intended).  Bad news, the other gang have caught word that the colorful gang is selling on their turf, so they go confront them which leads to the gangs getting into a brawl.  Kotaro makes it in time and breaks up the fight and warns everyone to not wear the necklaces as they are made by the Golgum.  Most people who are there just think that Kotaro is speaking crazy nonsense but the leader of the colorful gang gets nervous and runs off.  Kotaro starts chasing after her and if you look closely at this scene you can see a man in a weird papermache mask of Bobby Hill from King of the Hill.

Kotaro manages to catch the girl and starts asking her questions but is then attacked by Giant Wasp Man.  You know what that means? It means that it's time for round 1 of lucha rider hyper fight extreme.  Giant Wasp Man pummels Kotaro and throws him out off a high floor and while this is happening, the girl runs away.  IT'S HENSHIN TIME, BABY!  Kotaro transforms into Kamen Rider during mid-fall but don't worry though, he manages to do a sick flip while in the air and lands on his feet.  The tables have turned, Kamen Rider is now beating up Giant Wasp Man to the point where the monster has no choice but to run away. 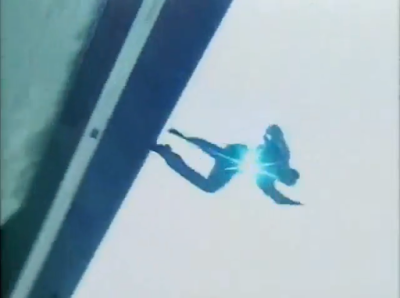 The Golgum are not happy that Kotaro had gotten in their way, so they start to infect all of the remaining colorful break-dancers.  Kotaro is very frustrated and worried about not being able to figure out how to stop Giant Wasp Man.  But before you know it, Kotaro sees Giant Wasp Man on top of a building and then wastes no time (as he normally does in every episode) and chases him down.  Kotaro ends up running into a trap and he is grabbed by the colorful gang members and one of the Golgums head honchos comes out and spills the beans to what their goal is for this week (typical supervillians).  Chances of saving the city is looking grim because it turns out that all of the eggs necklaces will hatch in thirty-minutes, creating a genocide for the city.  The Golgum then show a dark and creepy image of dead bodies all over the city... DAMN!

The leader of the colorful gang was listening to the whole thing and runs out and admits her role of selling the necklaces.  The other members of the colorful gang let Kotaro go and then they run to the side of the building and yell to the people to not wear the necklaces.  Giant Wasp Man starts attacking and the leader of the colorful gang escapes to the streets and smashes her necklace.  Where does she go from here? Why, none other than to the rival gang to where she tries to forcefully destroy their necklaces instead of asking them for help... Yup!  Her efforts are in vein, Giant Wasp Man starts attacking them... Yup! It's Henshin Time! Kotato gets to the gangs and then transforms into Kamen Rider.  We then cut to a very awesome looking chase scene with Kamen Rider on his bike and Giant Wasp Man flying in the sky while he is holding both gang leaders in his hands.  When I mean flying, I actually do mean it as they went full out on putting the actors mid-air and making them actually fly... Okay, they probably used a wire but it did add to the scene and also looked very dangerous to film.  If one actor drops then she'll be splattered on to the ground and ran over by a motorbike...  Thank goodness that didn't happen.  Kamen Rider makes a huge jump and rescues the gang leader girls from Giant Wasp Man and then smashes their necklaces.  Giant Wasp Man doesn't like this and starts charging after Kamen Rider. 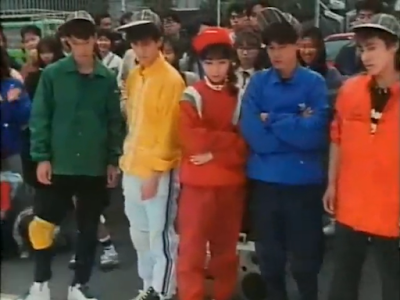 Now that the long talkie spoily bit is up... What did I think of this episode?  It wasn't bad but it was far from being perfect.  Yeah, the writing for the gangs scenes were silly and didn't make much sense but the rest of the episode did a good job at holding the show together.  I did like Golgum's plan for this episode as it gave this episode some intense and exciting scenes.  The gang scenes did feel like that they were thrown in there for the sake of filling the episode, they didn't really go anywhere with them.  This episode would've been fine without them... Although, I wouldn't say that they were terrible characters and I did like them to some degree.  I did enjoy that the Golgum had more involvement in this episode than what they typically do.  I like it when the Golgum are on the offensive side, their power is scary.

I loved the monster in this episode.  The Giant Wasp Man is a very creepy but cool looking character with an awesome costume design.  Actually, Giant Wasp Man reminds me of a live action version of Waspinator from Beast Wars, even though that Kamen Rider Black came way before.  I also loved how they used it as he was flying around, stinging, and all the typical scary wasp stuff, it was very well used.  The fight scenes were also pretty decent and made sense and it did feel like a man fighting a humanoid wasp (I know that sounds silly, but it's true d***it).  Effects were very well done in general and there were also a lot of them.  From computer effects such as lightning and butt lasers to practical effects such as wasps hatching and characters flying.  The thing I liked about all of the effects and costumes were that they didn't come off as cheesy and fake, they felt very natural...  Okay, minus the costumes for the gangs, they did come off as ultra cheesy and ultra forced to where I couldn't stop laughing at them.

Overall, not a terrible episode but the gang related stuff will make you cringe...  Despite that, I do recommend giving this one at least one watch for the wasp stuff alone.  I'm giving this episode a 7 out of 10.  Now it's time for me to buzz-off!
Posted by Retrokaiser at 11:51 PM