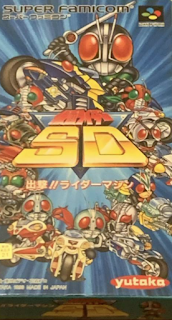 When it comes to getting Kamen Rider game released in English back in the day, we got the short end of the stick.  Out of the many Kamen Rider games released in Japan, we only saw so few.  We got a pretty decent arcade game (which you can read my review of that right here) and a very lousy Sega Mega CD game.  Oddly enough, the Sega Mega CD game got rated T in America.  Sure, most of the Kamen Rider games are lousy and I've reviewed a few of those stinkers here.  Some of them are surprisingly decent and should've been released outside of Japan.  This is one of those Kamen Rider games.  This is your captain speaking!  Today's gaming cruise ship voyage takes us to Kamen Rider SD: Shutugeki!! Rider Machine! A game released for the Nintendo Super Famicom.  (Click on "Read More" to read the full review.) 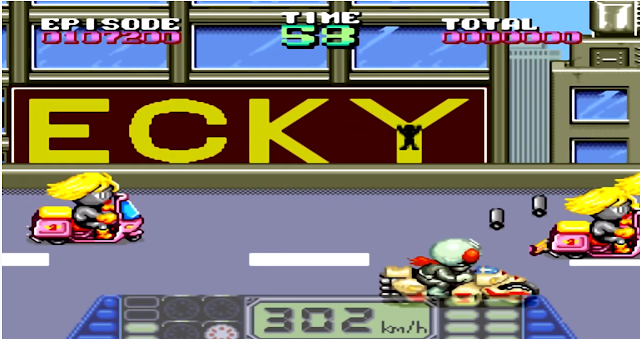 The story's completely in Japanese, so I had no idea what was being said.  However, that didn't fully stop me from getting what was going on.  If you've watched any superhero show in your life, you'll know what is happening regardless of the language barrier.

There's an evil force that must be stopped and the SD Kamen Riders are the only ones that have the power to stop them.  There's quite a bit of cut-scenes to be found here.  Each level will open and close with one about the leader of the group talking to you.

Again, don't know what was being said.  However, the actions and emotions of the characters is enough to give you every thing that you need to know.  Actions speak louder than words in this case. 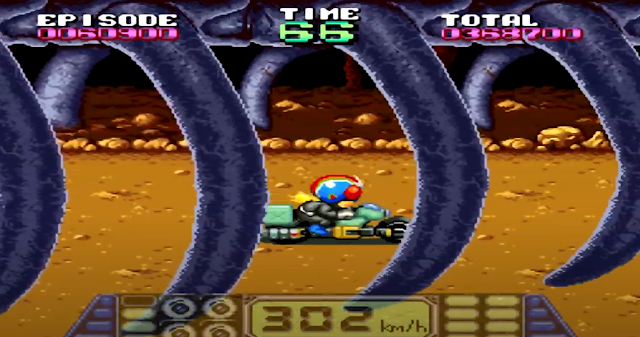 Take one half of Capcom's Final Fight and let it go on a drunken one night stand with EA's Road Rash.  What you get is a beat 'em up on wheels.  Belt-scrolling, high impact action, all while not getting off of your bike.

It's an interesting combination to turn into a game, but it makes sense for Kamen Rider.  When he is not walking around and punching things, he is on his bike.  Each level takes place on a long piece of road where Kamen Rider must kick out the baddies that pursue him.   The baddies will be mostly evil masked riders on bikes, but you'll also be fighting tanks, planes, and automobiles.

There will be two pit stops on each stage, where you can select a power-up to equip.  Power-ups were really useful, ranging from doing double damage, firing explosives, and making you invincible for a certain amount of time.  Each Kamen Rider also has their own unique special attack.  You do not get to pick your rider, but rather each stage uses a different one.  Some play better than others due to some characters having huge bikes that expand your own hit box and decreases your attack range.

I'm not going to lie.  I didn't like the battle system in this when I first played it.  I thought it was dull, repetitive, and not very fun.  Wasn't until that I got to level two where the system starts to show what it's made of.  Not only does it end up being a fun battle system, but there's an actual challenge to be had here.  It became less repetitive and I had to be careful on how I moved and approached the baddies.  They'll do some serious damage if you let your guard down.

Some levels have unique stage hazards to look out for.  However, these hazards didn't show up that much and I was disappointed by that.  At the end of a stage a big boss will pop out and these guys mean serious business.  Took me several attempts to knock one out.  Using the right combination of power-ups certainly helps to defeat a boss.  Don't rely on skill for beating a boss.  Their attacks are fast and hard, so avoiding them is not easy.

Once you have died, you'll have to start the level that you died on all over.  It gets pretty tough, but I wouldn't say that it is unfair.  Kamen Rider gets a very generous health bar and has some really powerful moves.  What is brutal though is that this is a long game of ten very long levels.  Took me an hour to reach stage four, but what makes this brutal is that there's no saves or passwords.  You'll have to beat this on one extra long session.  Thank goodness you get unlimited continues.

The levels could've been one to two sections shorter.  Considering that some sections tend to repeat themselves a few time.  I can not see many people playing this on one sitting without using some device that allows save states.

The controls are very smooth and responsive, granted there is not much to them.  You move around with the D-pad, attack with the B, while X and Y are used for the specials.  Also, you have hold either up or down to attack in certain directions which isn't as bad as it sounds.  Using the L and R shoulder buttons will accelerate and decelerate your bike.  This move is more useful than you'd think.  You'll need to adjust speeds to get close to the bad guys. 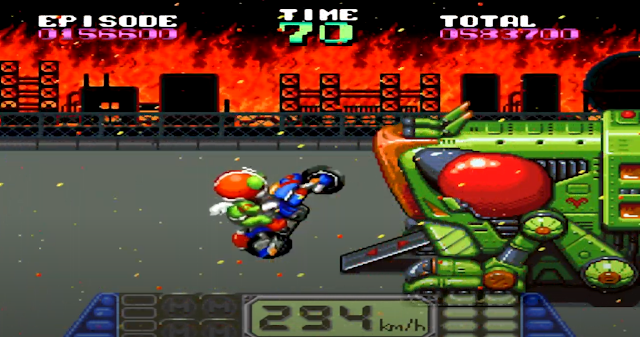 The graphics and presentation is excellent.  Fun and colorful looking stages, big awesome sprites, and good animation is consistent throughout this game.  I loved it.  You will get some sprite flickering when there is a lot on the screen.  It is a rare thing to happen though.

I loved how each stage had a certain theme.  Granted, they are pretty standard themes like forest, caves, deserts, etc.  I have not seen them used in this way and it is fun just driving through them on my motorbike. 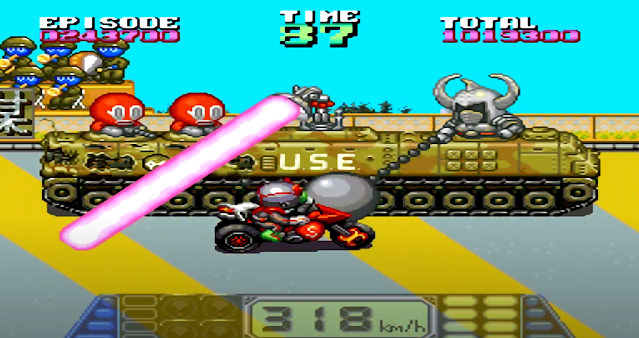 The soundtrack is full of 16-bit superhero power pop goodness that just makes you feel so good on the inside.  You'll get pumped, excited, and ready to kick some butt.  They aren't the most memorable of tunes though.  You'll soon forget about them right after you have turned the game off. 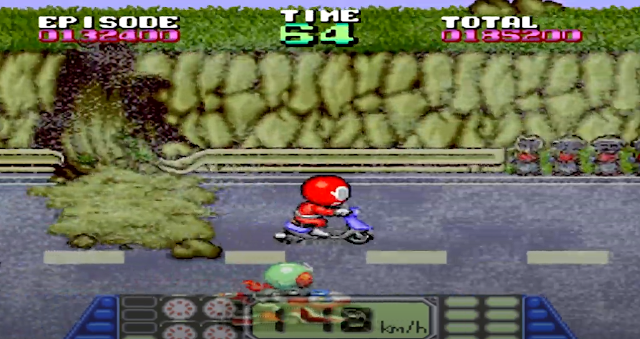 Overall, Kamen Rider SD started off as a drag, but it ended up being a really decent little Super Famicom game.  If you are looking for something different or are a fan of the old costumed superheroes, you'll have a good time with this one.  Heck!  It's even better if you have a friend to play multiplayer with.  However, it is far from perfect, but still very decent.  7/10

Posted by Retrokaiser at 9:59 PM