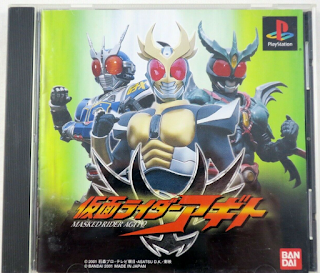 It has been awhile, but it is time for another dive into the realm of Kamen Rider video games.  So far we have had to cover nothing but cheap cash-ins here at the Emerald Rangers Ranch.  Will Kamen Rider Agito (AKA Masked Rider Agito) be the Kamen Rider game that will rise up and be a good game?  I severely doubt it, but we shall see in another exciting Kamen Rider video game review.  (Click on "Read More" to read the full review.) 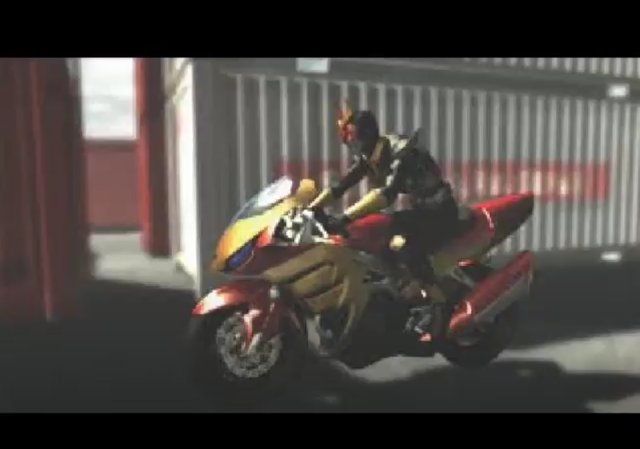 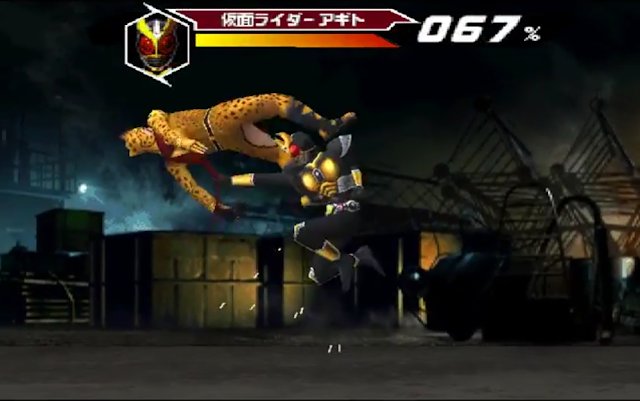 This game has you playing as the titular, Kamen Rider Agito.  Good ol' Kamen must defeat evil baddies in the art of one on one combat.  While most of the battle system has you fighting baddies in a way that 99.99999% of the other fighters do, this one has one weird twist.  Instead of beating your opponent until they are out of health, you must beat them up until you fill up a power meter.  Once you fill it up, you'll be able to use a special finishing attack.  Okay, let me re-phrase that a little.  You MUST finish the baddies with your finishing attack.  Once you do that, the baddies will explode and you will move on to the next stage until the game is finished.  The power meter will go down if the baddie gets a hit in on you.

There's no much for when it comes to the attacks.  Square will activate stiff standard attacks, circle will activate stiff power attacks, triangle (when the meter isn't full) works differently (and just as stiff) depending on the character (will get to that soon), and cross will activate a very stiff dash.  You see where I'm going with this?  The controls are slow and stiff to where you'll make a lot of mistakes and leave yourself open for a whole beating.  It's okay though, the A.I. isn't very smart and will make the same mistakes as you do.  Heck!  They make even worse ones, making this game easy to get through.

Oh, one more thing about the controls.  The special attacks can only be done under certain circumstances.  Once you've reached that circumstance, you can hit triangle at any time to finish the match.  Surprisingly, the special finishers are the only attacks that aren't stiff.  Quite the opposite.

At first glance the content of this game seems rather thin.  With a campaign mode, VS mode, and a gallery mode.  This can feel quite underwhelming and a waste of your time and money.  However, once the campaign mode has been unlocked, another campaign mode will be unlocked, and another one will be unlocked after that.  Yup, three campaign modes.  One for Agito, one for Evil Kamen Rider (don't know his proper name as I haven't watched that season yet, nor can I read their name since it's in Japanese), and one for a Space Sheriff Gavin looking Kamen Rider named G3.

All three main characters play differently and Kamen Gavin's move set even changes throughout the game.  I did have fun playing through all three campaigns.  Each main character does give this game a new experience.  However, despite the stiff and tacked on gameplay, it's still easy and can be beaten in around an hour.   This game also doesn't require any knowledge of the Japanese language to enjoy, despite there being little to no English text in this game.

You can play as all of the heroes and baddies in verses mode for if you have a second player.  Verses mode has a more traditional fighting game rule-set, where the player that loses all of their health loses at the game and life.  Most of the characters weren't very interesting to play as anyway.  Just stick to the main three characters. 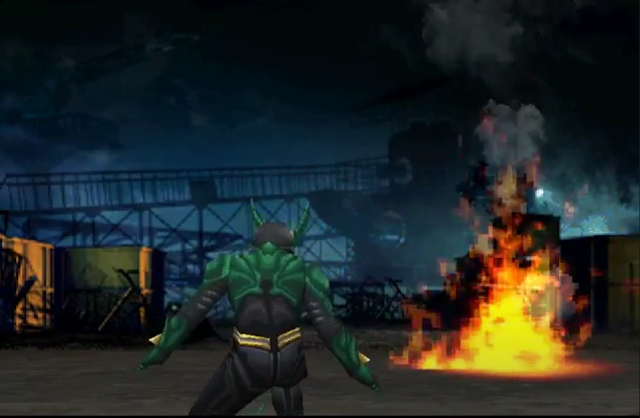 The graphics are a bit of a mixed bag.  The backgrounds are cheap and cheesy looking with it's lame and lifeless static 2D style.  Funny enough, the character models are amazing for a Playstation One title.  They are super crisp, clean, and pretty well detailed and could pass off as early Playstation Two models.  I also really dug the FMV opening.  It's full of action and excitement that just got me all rowed up and excited. 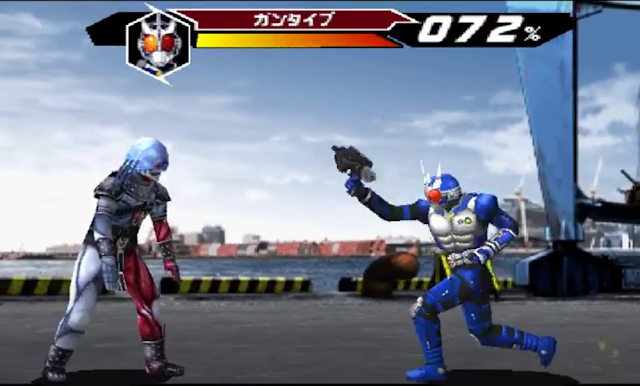 Soundtrack is very good as it uses songs from the television series.  It's not instrumental stuff either, it's the full deal with the rocking guitars and epic vocals.  It sounds really clean as well, although I can't say the same for the sound effects.  Okay, they aren't that bad, they sound pretty good, but you will notice that classic bit crunching.  It actually adds more retro charm to the game. 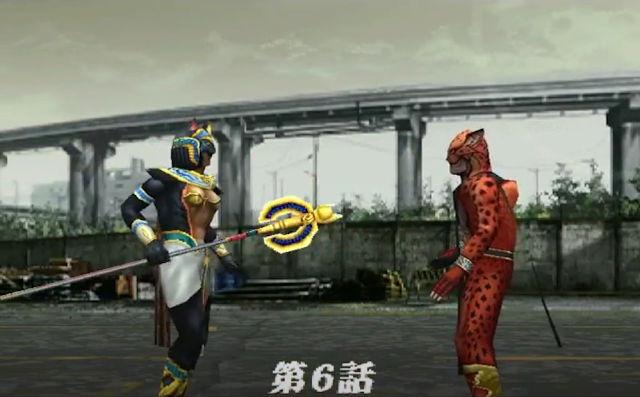 Overall, Kamen Rider Agito has awesome presentation (minus the backgrounds) and super hi-rez characters, however the gameplay is stiff and gives the game a rushed feel.  It's a cheap cash grab and is only for the mega Kamen Rider otaku or for those that get their rocks off to mediocre fighting games.  (You know who you are!..  Well, I don't know who you are personally, but you sure do.)  Kamen Rider Agito gets a 5.5 out of 10. 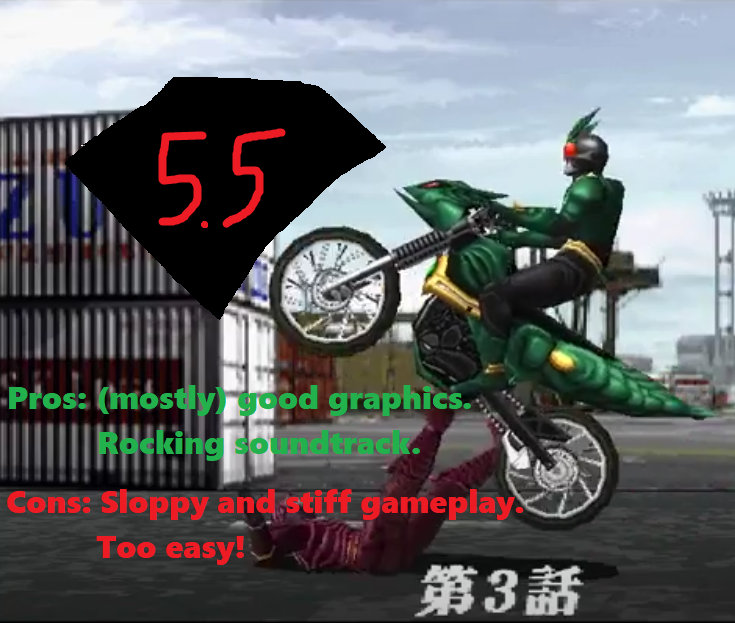 Posted by Retrokaiser at 7:10 AM