Here is a short lived Improv Comedy show I have found memories of, only lasting 12 episodes + the pilot. Airing from fall 2004-2005 on WB and Comedy Central, this show was created by Drew Carey after Whose Line is it Anyway had finished its run and the show easily felt like a continuation as it featured several of the same games and cast. So, click "read more" and let us take a look back at this failed experiment.

This all started with a UK Improv Comedy show basic on a radio show from 1988 called "Whose Line is it Anyway?" which ran from 1988 to 1998. Drew Carey, obviously being a big fan of this show, would go on to host the American adaptation of Whose Line from 1998 to 2003. (The show actually aired new episodes up to 04 just from having them filmed in advanced. Also, from 05-07 the released "new" episodes using unaired footage of past episodes. But, all that is another story.) Once Whose Line ran its course, Drew was obviously not done with the improv gang. So, in 2004, his first of 2 failed attempts to bring them back was born before the Whose Line reboot in 2013 was created. Drew Carey's Green Screen Show.
This show was created by Drew Carey as he claimed to have had the idea from one of the games on Whose Line, "moving people". In "moving people", two of the performers are controlled by members of the audience and Carey thought it would be funny if the audience could not see the people moving the cast. (A feat they almost achieved.) All shot in Hollywood California on a set used for movie special effects. 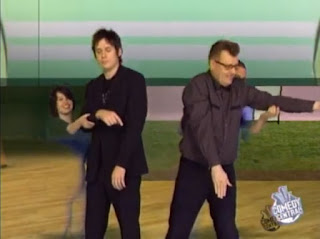 A very ambitious project that was probably not cheap to make. But, it found a small yet loving audience. Sadly, low ratings and interest caused an abrupt cancelation.

Hosted by Drew Carey, roughly 4 or 5 games are played on each episode, often using suggestions from the live audience, and everything performed is made up on the spot. Hence, "improv comedy". The big twist about this show is that everything that is performed is animated by what Drew Carey claims to be "the best animators in the world". 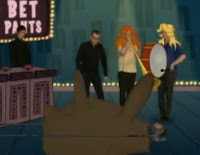 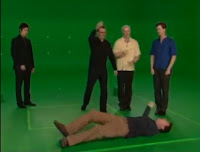 The animation, while a more silly style, is very well made and even gives the illusion of depth or size changes from time to time. 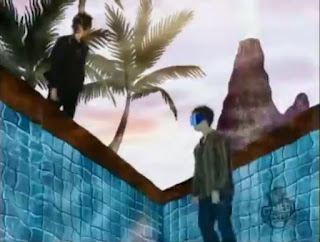 The segments from each episode came from multiple filmings which, when noticed, can hurt the illusion that the show is meant to be live and made up on the spot. Evidence of this is when the cast have different clothes in-between games and in a more extreme case, Kathy Kinney vanishes in episode 6. She is introduced at the beginning of the episode, even partakes in a few games, but during the last game and goodbye segment, gone without explanation. This is probably the biggest fault of this show. I understand why it is done, for the sake of better quality. However, the low effort into the illusion can turn some audience members off.

Whether you are a fan of improv comedy or not, the odds are you probably have not seen a show take this approach to it. I would say it is worth watching at least one episode simply to appreciate the effort that went into creating this show.

Watching this show as a teenager, I laughed non stop, but as an adult it is more understandable as to why this show did not do so well. It is a show that tried to be an upgrade of another show immediately after the original show got canceled but before it finished airing. Not the best timing. It was also strangely limited for having the green screen animations. None of the singing games made it from Whose Line or anything that used props. Some new games were introduced that made better use of the green screen effect and it is obvious why they would want to focus on that. Still, less variety is noticeable.
That being said, I still hold this show in high regards as it is still a lot of fun to watch. The cast clearly have fun doing these improv games and I am a huge fan of improv myself. Still, the animation must have driven up the production cost and jumping networks in the middle of the first season must have put a lot of stress of development.
One can never really know why a show is or is not popular, anything is just speculation. Still, I would have thought this particular type of show would have had a peak before the plumet just for the crazy concept alone. Breaks my heart a little to see how little people knew about it. Overall, this is one oscure piece of history that I will always have fond memories of. Considering it was never re-released digitally or on any DVD or other home media platform, I will say check it out while it still can be found. A lot has changed in the last 15 years since this show aired, now, I think this would make a great YouTube comedy series.
Posted by Cendoo at 12:00 AM