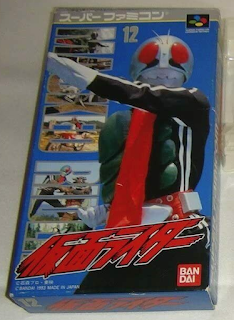 You know how some gamers swear that a game is good because they spent a ton of money on it?  (*Cough* The people that bought the Double Dragon 4 Collector's Edition *Cough*)  Well, today's game is a very expensive one to find and it's a tokusatsu game.  So, going by that logic that means that this game should be a twenty out of ten game that only the game collecting gods should experience.  This is Kamen Rider for the Super Famicom and I have huge doubts that this game will be worth spending a king's ransom on.  Let's see shall we?  (Click on "Read More" to read the full review.) 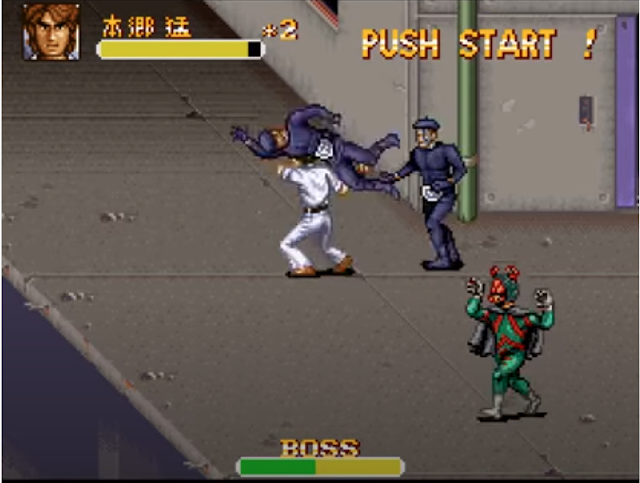 With this being a Japanese only release, you can bet your a*se that it's going to be more than likely only in Japanese.  This is only appropriate for reasons that I do not need to say.  However, I did not need to understand the dialogue to get what was going on.

It is the year of 19xx and a great and evil force is trying to take over the world.  A courageous old man tries to stop the baddies, but he has a bad case of being too old for this sh*t.  Thankfully he has two young teenaged boys to help him.  Two teenaged boys with the power to kick butt, wear ascots, and transform into Kamen Rider. 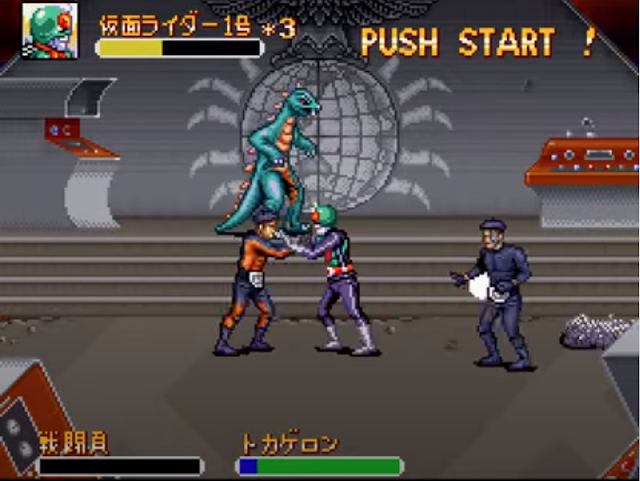 Kamen Rider fight!  Kamen Rider Final Fight more like it.  Heck, I shouldn't even dare be comparing it to Final Fight.  Why? Well, it's because the gameplay is very, very plain.  It only uses the very core basis of punching, kicking, and throwing.  It's a very repetitive experience that gets boring very quickly. Vanilla to the max.

The levels themselves may seem cool at first with the monsters that you fight, but most of the baddies look and act the exact same way.  The baddies that do act differently are the mini and big bosses.  The bosses are okay if not a little predictable.  Finishing the bosses is a little different in this game.  You've got to get their health low enough, so you can finish them off with a Rider Kick.  (That's Kamen Rider's finishing move.)

Okay, this game has one big gimmick that is unique.  At the start of a stage you'll start off in your unmorphed form, where you'll be a bit slower and weaker.  You can transform into Kamen Rider where your skills are greatly improved.  It's not a bad feature, but it has one little thing that makes this system unbalanced.  You can transform into Kamen Rider right at the start of the stage, making playing in your unmorphed form to be pointless.

The difficulties could've also been rebalanced.  Playing on easy makes the game way too easy, while playing on normal makes it way too hard.  There is a hard difficulty too and you don't want to know how badly that mode will kick your butt.

Controls are really responsive and easy to learn.  Heck, if you've played any beat 'em up, you're already a master at controlling this game.  It's that simple.

You will not need to know Japanese for 99% of the game.  The gameplay requires no translation and the menus are easy to navigate through.  The one gameplay part that was a bit confusing to navigate through were these weird menus that appear in-between some levels.  After some hopeless mashing around I saw that they were mini-games.  They vary from beating up harder than normal baddies to trying to stop a moving bulldozer.  They were okay, but the novelty wore off very quickly. 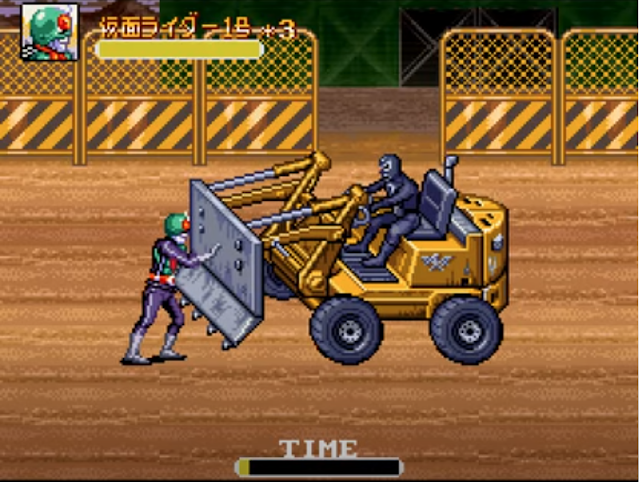 While it is full of 16-bit color, it's not enough to save it from looking anything but plain looking.  With bland looking backgrounds, characters, and pathetic animations that makes Kamen Rider look like a cheap Pop-Eye clone. All of this compliments the gameplay well and helps to cement the cheap cash grab that is this game.

Okay, it's not all bad.  There were some level sections that looked decent, but they were over as soon as they begun.  The other semi-good looking thing is Kamen Rider's finishing move.  It's a good ol' Kamen Rider sprite being zoomed in with good ol' Mode Seven.  The reason why I say "semi-good looking" is because that this finishing move is shown on different angles on each stage.  Some of these angles are just plain goofy and ruin the good looking nature of this animation. 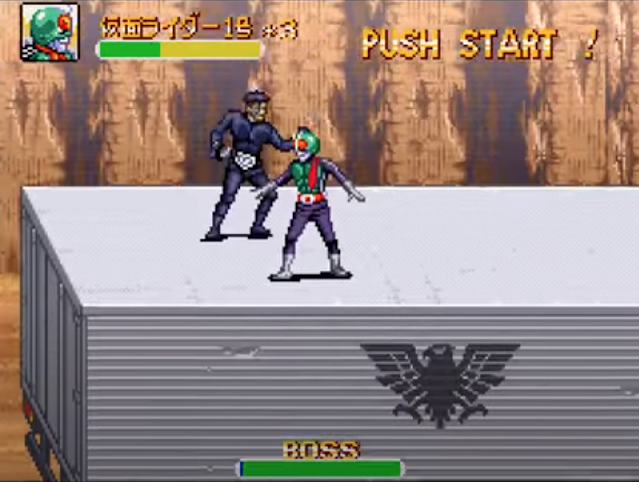 The music is mostly a very mediocre rendition of the television show soundtrack.  The choice of soundtrack may be appropriate, but it lacks that super hero power sound.  This game does however have the balls to have a karaoke version of the theme song for the games intro.  Not gonna lie, was really impressed with that part.

I'm mixed on the sound effects.  The punches and attacks sound wimpy and lack impact.  The transformation and voice clips are very awesome.  Voice clips were really clean and easy to make out. 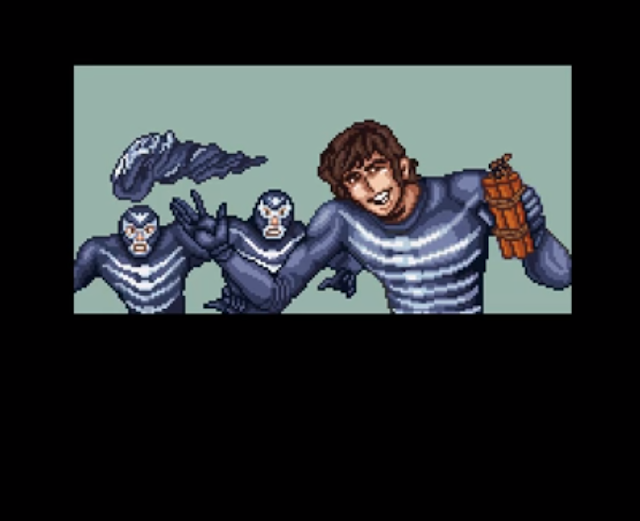 Overall, as much as I rag on this game, it isn't a terrible one.  It's not a remotely good or even an okay game though.  Kamen Rider for the Super Famicom is a very average run of the mill beat 'em up that does nothing new with the genre... Well, other than adding a transformation button.  Even so, that's not enough.  This game gets a five out of ten.  If you want a better version of this game, play the Mighty Morphin Power Rangers the Movie the Game games.  5/10 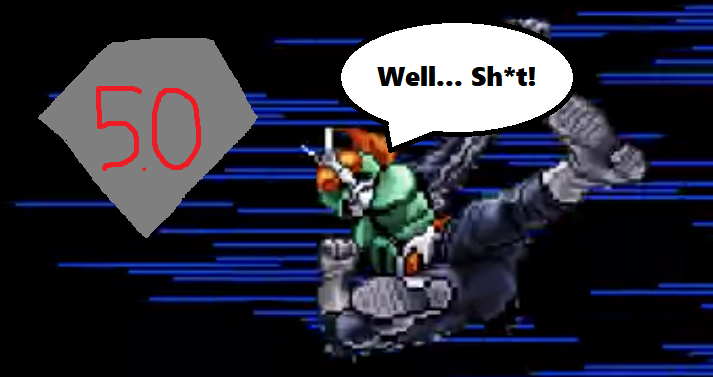 Posted by Retrokaiser at 5:00 AM