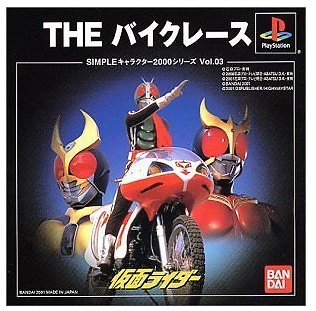 Finally! I am reviewing something from the greatest video game series of all time!  Yes, this is the Simple Series where you can get quality games for dirt cheap.  Okay, we are talking about a different kind of quality here.  A quality that's best described as being so bad that it's good.  There are a few exceptions though as some of the games in this series are really, really good.  Will this game be one of them?  This is Kamen Rider - The Bike Race and it is volume three of the Simple Character 2000 Series.  (Click on "Read More" to read the full review.) 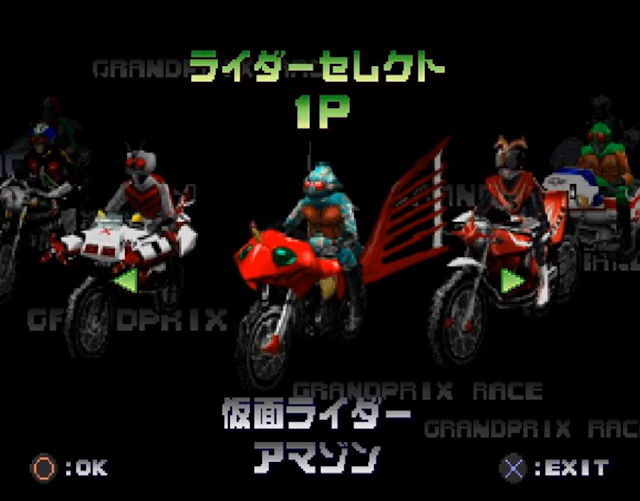 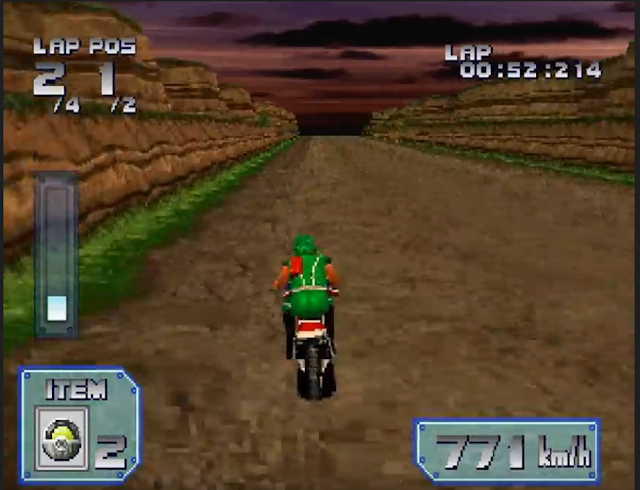 Kamen Rider: The Bike Race is a motorbike game where you get to race around as a Kamen Rider. The goal is simple, you are put up in a one on one race against another rider.  You must beat them in order to progress though the game.  There'll also be other riders on the field that will try to slow you down.  You can beat them (and your opponent) by kicking them, ramming into them, or by using a special ability that you can gain by picking up these weird egg things that are scattered across the tracks.  You also start off by having one item to use right from the beginning of each race.

The game isn't as easy as what it seems, your opponent is very fast and can sneak up on you at any time.  If you lose, don't worry because you can just simply retry.  The levels are easy to get around and are very boring in design.  Well, that was until I reached the third stage, which is made up of thin, tunnel like roads that were annoying to get around.  No matter how fast you go or how well you turn, BAM!  You'll be bumping into things.  After I finally beat that tough third level, I got a huge surprise. Turns out that was the final level.  Yup, there's only three levels in this game.  It took longer to beat the Kamen Rider slot machines high score mode than it did to beat this.

While lacking in race tracks, this game does have other modes.  There's the standard time trial mode and I don't need to explain how that mode works.  You've got a two player mode and this is interesting because it takes place on a fourth level that you can only play via this mode.  It's another tunnel like race track, but it's so much better than what level three was.  It's still a mediocre and boring track, but still, better than level three.  Last mode is the most interesting, it's battle royal mode.  In this mode you have to drive around and knock down baddies for points.  This mode has a time limit and you get extra time by kicking down baddies and completing laps.  It's fun for a little bit.

The section of characters is very good, you get a varied choice of Kamen Rider to play with.  The main roster is from the 70's and the 80's because there were no Kamen Rider seasons during the 90's.  You've got riders from series such as V3, Black RX, and Amazon.  There are some key vehicles missing from the lineup such as Black, but it's still a very solid roster overall.  There are some secret riders that will unlock upon beating the game. I won't spoil who they are but they are cool additions nonetheless.  Each rider has different stats and you can certainly tell the difference between how each character plays, there's nothing subtle here.

Controls are what you'd expect.  Cross is to accelerate, square is to break, L1 and R1 activate the left and right kicks, and L2 and R2 activate the items.  When you tap down on the d-pad, it'll give you a boost.  This move is a godsend for if you want to smash your opponent and it can send you up to the insane speed of 999KM per hour!  Downside is that it's a little bit wonky to pull off and you'll find yourself doing some stupid turns if not careful.

One last bit of advice.  Avoid using the breaks, they are the devil in this game!  They don't just slow you down, they put you to a near complete stop.  Good news!  You don't need to use the breaks, you can go just as fast around the corners as you'd like.  Yeah, you won't crash if you smash into the walls, although you will take damage.  You don't need to worry about crashing due to damage unless one of the other riders kicks you.  Even so, you only spin out for a few seconds. 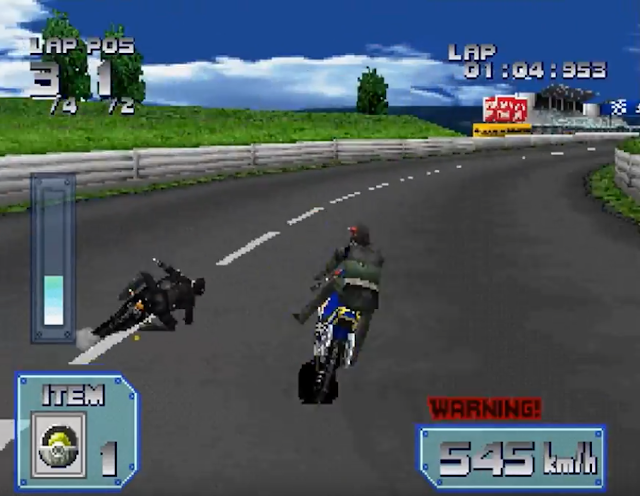 The graphics are incredibly mediocre with boring textures and badly put together models of the Kamen Riders.  They look more like cheap knock-offs that you'd find in a dollar shop.  I can say one thing though, the Kamen Riders sure have some thick booties in this game.  Okay, it's not all bad as the bikes themselves do look good.

The animation is very stiff and laughable.  The animations for the victory poses will make you spit out your drinks.  Why?  Because their arms are ridiculously tiny and when they move they look like they aren't attached to their bodies.  Heck! Their bodies don't move along with their arms, so you'll constantly see the arms clipping though the body.  It's bad! Really, really bad! For real! 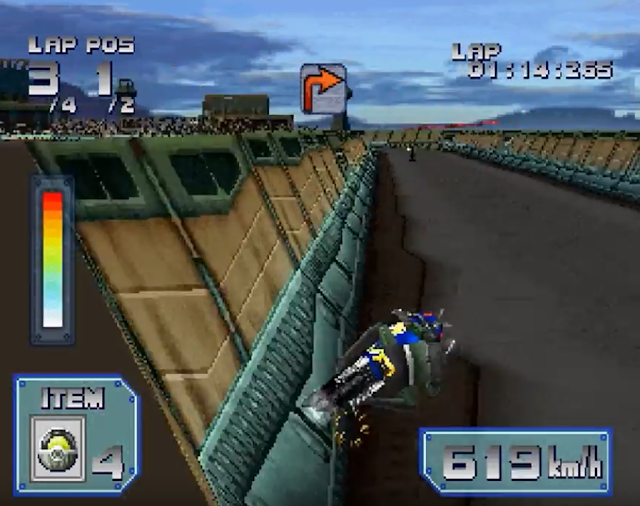 The music is cheery and goes very well with the superhero theme.  The sound effects are harmless and aren't worth mentioning, except for the sound of knocking a bad guy off of their bike.  It's such a satisfying "blech" sound that it makes it worth tracking down a bad guy just so you can hear that sound. 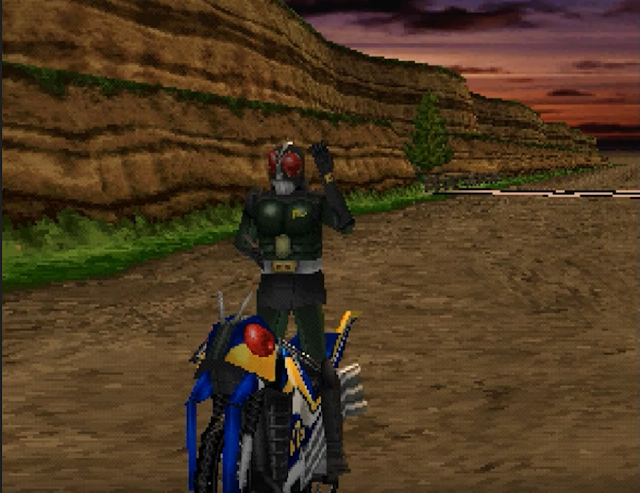 Overall, making a motorbike racing game based on Kamen Rider makes a lot of sense.  Sadly, what we got here is a very mediocre game that's not worth your time.  (All twenty minutes of it.)  I give this game a lousy 4.5 out of 10.  Hmm.  Maybe I should live stream this on the Emerald Rangers Twitch page one day.  (Make sure to give it a follow.)