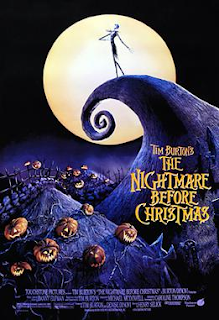 Happy Halloween everybody!
I was struggling to figure out what would be the best film to review for the season. While I absolutely could have done your standard horror film, those films have never really been my thing. I can certainly appreciate the nuances and subtext and many classic horror films but for this particular Halloween, I think I will go for a more light-hearted fare.

First developed as a poem by Tim Burton in 1982, The Nightmare Before Christmas would stew at the back of Burton's mind throughout the 1980s; the director slowly developing a name for himself with films like Batman (1989) and Beetlejuice (1988). In 1990, Burton approached Disney, slowly coming into its own with its animation department, with the idea to adapt his poem into a stop-motion animated movie, inspired by animated shorts like the Rankin-Bass Christmas specials. Disney accepted the idea under their Touchstone Pictures production company, which catered to those films which were considered more "grown-up" than was appropriate for the Disney brand.

As Burton was busy with the production of his sequel to Batman, Batman Returns, he got his friend Henry Selick to direct The Nightmare Before Christmas, which released in 1993 as an enormous financial and critical success. And in the decades have followed, the popularity of this movie has only gotten stronger, with The Nightmare Before Christmas now being considered a cult classic. the film helped to not only solidify Burton's unique visual aesthetic but paved the way for future high-budget stop-motion animated feature films. Films like Coraline, Kubo and the Two Strings, and Paranorman owe so very much to their spiritual ancestor.

But how good is this movie? Does its influence on the modern zeitgeist far out shadow its standalone presence?

Let's take a look and find out.

Jack Skellington, the leader of Halloweentown, a magical world dedicated to everything associated with the holiday, finds himself incredibly bored of the holiday and longing for something unique and different. When Jack stumbles across the land of Christmastown, he thinks that this new holiday is the answer. When his fellow denizens of Halloweentown don't quite get the concept, Jack decides the best way to celebrate Christmas is to take over the operation of the holiday himself, even kidnapping Santa Claus to give him "the day off".
But when their holiday plans don't go as planned and Santa falls into the clutches of the evil Oogie Boogie, it will be up to Jack Skellington and his friends to fix his mistake and bring back Christmas.
***

The Nightmare Before Christmas has achieved a cult-like status in popular culture, and for very good reason. Going into this review, I had thought that my focus was going to largely be on the sheer level of quality and creativity that was on display in this movie. And while that is certainly the case, I found myself more interested in just how historically important and influential this film has become to our current society.
From the animation to the music and characters, The Nightmare Before Christmas has become a classic of the entire holiday season and a masterstroke of not-only Disney animation but a proof of concept for the power of stop-motion animation.

Honestly, if you are like my family and watch tons of Christmas and holiday films during the holiday season, you've likely heard the soundtrack of this film. The Nightmare Before Christmas was something of a masterstroke from a marketing perspective, being able to stand as both a Halloween and Christmas movie simultaneously opening a much wider window for peak audience exposure. And the largest share of credit for that cultural popularity is owed to the soundtrack.
The brilliance of Danny Elfman, who also provides the singing voice for Jack Skellington, is on full display throughout. I do not exaggerate when I state that every single song in this movie is sheer perfection, perfectly mixing whimsy with pathos and passion. "This is Halloween" has become the go-to Halloween song for many and I have a personal soft spot for the soft and lovely tragedy that underlies "Sally's Song", listening to it whenever I get the urge.
And of course, if we are talking music, we have to cover the villain song "Oogie Boogie". The villain of The Nightmare Before Christmas was heavily inspired by Cab Calloway, an American jazz musician popular in the 1930s and 40s, and Elfman uses to supreme effect in his introductory villain song. Oogie is equal parts ferocious and hilarious and his song is the perfect reflection of his manic and unstable personality.
Overall, The Nightmare Before Christmas is a triumph musically and easily wins my highest marks in terms of a score for this category.

Like everything else about this movie, the characters of The Nightmare Before Christmas have become icons of the holiday seasons in popular culture. Everywhere you look, especially around Christmas, you are liable to find Jack Skellington and his friends and enemies on various pieces of merchandise. And for very good reason. Though The Nightmare Before Christmas is, as I will explain in the Story section of this review, a comparatively short and simple film, Tim Burton and Henry Selick did a great deal to load the film with characterization for nearly everyone on screen.
Much of this strong characterization comes from the unique visual style of each character and how they move. For example, Jack Skellington's suit and graceful cadence counterpointing his grace from his manic energy. Comparatively, Sally is a Frankenstein-style monster that is often falling apart or considered quite fragile, despite her own self-reliant and adventurous nature. The fact that the film doesn't really rely on big named celebrities to voice their characters reveals how much faith Burton had in the personalities of these characters.
And it is these strong and fun personalities that have shined over the nearly 30 years since this film's release (the fact that this film was released 8 days after I was born notwithstanding...eek). Jack Skellington, Oogie Boogie, and Sally have of course become household stars, but even the minor characters leave a strong impression upon the audience. That is a power that very few films possess but The Nightmare Before Christmas almost seems to relish in.

If there is one element that caught me particularly off guard with this movie, it is how incredibly short and simple this movie's story really is. The film is an hour and 16 minutes in length, which is incredibly short by feature-length film standards. If the film were a little shorter, it would be at a comparable length to many of the Rankin Bass Christmas specials, which is sort of apt in a strange way. The film is very brisk narratively speaking, with one central story beat, that is Jack Skellington attempting to understand Christmas, and the fallout from that particular line of action.
This results in a very light film. There isn't a whole lot going on beyond the very thin conflict in the story, with even our main antagonist not even really being an issue until the last 15 minutes or so. Now that also means that the story is laser-focused and tells a very concise and succinct story. The Nightmare Before Christmas really is structured and organized like a gothic Christmas special and the concept is honestly so unique and fun that I can't really see its simplicity as a fault, but rather as a tribute to the kind of story it is trying to tell. A Christmas fable.

The Nightmare Before Christmas is a holiday classic. This is a fact that cannot be denied. What also cannot be denied is the cultural impact that this movie has had since its release, but on general audiences and the film community. The Nightmare Before Christmas helped pave the way for stop-motion animation films by being a successful tribute to the classic Christmas specials from our childhoods, with the iconic twisted edge that is so definitively Burton.
I don't have to tell you to watch this movie because more than likely you will already be watching it multiple times in the weeks to come as the holiday classics begin airing on television. This film is a tradition in my household and it's very likely one in yours as well, and rightfully so.
Things will go back to normal next week when I do a quick editorial section highlighting my love for a show very closely tied to the upcoming United States presidential election.
VISUALS
SOUNDTRACK
CHARACTERS
STORY